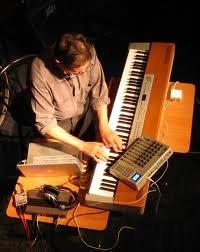 Legendary US experimental music composer/performer Alvin Curran will arrive on Australian shores this month for a national tour courtesy of Tura New Music and the Soundstream Collective. At 74 years of age, this tour is a rare opportunity to see the pioneering experimental composer at work across a range of musical settings.

Curran's three week tour begins in Perth as a key note presenter at the International Computer Music Conference (ICMC) as well as a performance at TURA's Totally Huge New Music Festival. Curran will then travel to Adelaide, Melbourne and Sydney for a series of residencies, performances and special events.

In its 11th year, the THNMF is Tura New Music's flagship event which presents an exciting landscape of new music and sound art practice from around the world, Australia and WA. This year's festival incorporating the ICMC, will focus on the place where art and science meet.

A residency with Adelaide's SoundSteam Collective will see Curran conduct the premiere of Oh man, Oh mankind, Oh Yeah which features a massed choir of 80 singers. Following this, the Soundstream Collective will perform Curran's chamber work Rose of Beans. As part of this concert, Curran will also present his solo piano work, Fake Book.

In Adelaide multi-award winning pianist, Churchill Fellow and Artistic Director of the Soundsteam Collective, Gabriella Smart, will perform the Australian premiere of Curran's six-hour solo piano work in Adelaide and then again in Melbourne as part of Monash University's Academy of Performing Arts program. The work celebrates the great cities he has inhabited through a series of pieces comprising of a cycle. Inner Cities is a celebration of space, light, meditation and the transcendence of time.

During the performance, the audience are free to wander, physically and mentally, absorbing the different architectural and acoustic perspectives of the space. This event is FREE.

Democratic, irreverent and traditionally experimental, Curran travels in a computerized covered wagon between the Golden Gate and the Tiber River, and makes music for every occasion with any sounding phenomena – a volatile mix of lyricism and chaos, structure and indeterminacy, fog horns, fiddles and fiddle heads.

He is dedicated to the restoration of dignity to the profession of making non-commercial music as part of a personal search for future social, political and spiritual forms.

Curran's music-making embraces all the contradictions (composed/improvised, tonal/atonal, maximal/minimal) in a serene dialectical encounter. His more than 150 works feature taped/sampled natural sounds, piano, synthesizers, computers, violin, percussion, shofar, ship horns, accordion and chorus. Whether in the intimate form of his well-known solo performances, or pure chamber music, experimental radio works or large-scale site-specific sound environments and installations, all forge a very personal language from all the languages through dedicated research and recombinant invention.

Alvin's tour is courtesy of Tura New Music and SoundStream.