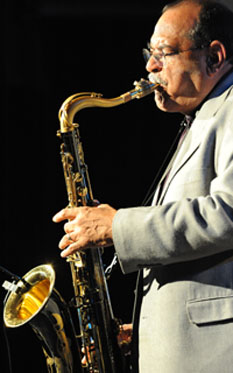 It was an unbelievable coup. When volunteer VJ's impresario Mark Ginsburg announced the advent of The Ernie Watts Quartet, I was staggered. There could be no more deserving venue than VJ's, but how did it get the jump on the more obvious ones? I still don't really know. And it doesn't really matter. The important thing is, it did.

Ernest James Watts is a phenomenon. He's won two Grammys (somewhat ironically, for Best Pop Instrumental and Best R & B Instrumental performances). He's played with everyone from Adderley, to Zappa. He played in The Tonight Show Band, under the leadership of Doc Severinson, for twenty years. He recorded with Marvin Gaye through the seventies. He toured with Buddy Rich in the sixties. Did I mention The Rolling Stones? He's toured with them, too.

He might be best-known for his work with Quartet West, but he has his own and, as a packed house at VJ's discovered, it's practically peerless. (Actually, this is as good a juncture as any to explain Watts actually has two quartets: his American and European. For whatever reason, for his Australian tour he's engaged the latter, which has been a unit for a baker's dozen years.) To The Point is the title track from the band's 2008 album and, for openers, the EWQ delivered a scorching rendition, at a frenetic tempo. I seem to recall both bassist (Rudi Engel) and drummer (Heinrich Koebberling) having adrenaline-charged fun trying to keep up with their fearless leader who, appearances to the contrary, is fighting off septuagenarianism. To The Point is precisely that: Watts made it unmistakably clear, from the get-go, he's not one for pussyfooting. He's Mr. 110%. Sure, his playing can be subtle and his technique is phenomenal but, as often as not, he's a showoff. And that's more than ok, 'cause he has the chops. And how. As death-defying as this track is on disc (recorded live at Jazz Bakery, a not-for-profit, not unlike VJ's), to a man, the quartet outdid itself down under, to the point it could've left the stage after this one piece and left us renewed and reinvigorated; ready for anything. It's a tune that could motivate anyone to superhuman achievement. Hair-raising, in the best possible way. An inspirational, nigh-on twelve minutes of hand-squeezed jazz juice. Close your eyes. It could be Yardbird up there; (even if Watts' personal Jesus is Trane).

Konbanwa means good evening in Japanese and opens Oasis, the EWQ's latest recorded offering. Written by Koebberling, as I remember, it's a cool, sophisticated, lyrical composition. It's generous too, for Koebberling hasn't been obsessed with writing parts for himself: if anything he affords his bandmates more room. It's a track that has Koebberling busy on brushes to begin, pianist Christof Saenger plotting elegant chords, Engel keeping a tight and tidy, warm bass rhythm (breaking into a brief, but handsome solo a little later), with Watts now sounding velvety, feathering the bed. This one's more Grover Washington than Sonny Rollins. Saenger merely hints at his digital facility. It's an elegant tune that has all the hallmarks of a standard in the making.

The title track from Oasis continues in this romantic style. These are midnight melodies; the kind that ring even truer in the still of the wee smalls. Koebberling is all over the cymbals and toms; Watts is, at once, sounding mellifluous and impossibly virtuosic; Engel underpins Saenger's nomadic wanderings. There's no denying the Arabic flavour which, of course, is so close, when it comes down to it, to sounds a predominantly Jewish audience could appreciate and savour. This really is a deeply evocative, soulful piece, which puts me in mind of a leathered, weathered Bedouin crossing the desert, in search of something.

The second set included Coltrane's Crescent, also recorded for the new album. Watts' tone sounds a little sharper than JC's and, overall, the quartet has more attack in the opening bars. But the initial cacophony settles into a more restrained limbo, before asserting a sassy swing somewhere up tempo of the original, I think. It's judicious, inasmuch as it honours  the 1964 recording, while bringing something new, without aerogance or brashness. Saenger comes to the fore (as he almost always does) with his infinity of tinkling: the dexterity of his right hand could never be replicated by anything robotic, no matter how far technology might take us. By this stage, it's yet another reminder and further, conclusive evidence one is in the presence of genuine jazz genius.

There was a Keith Jarrett tune, another original or two, a superb recasting of The Beatles' Blackbird and a wondrous Horace Silver blues to conclude, which saw the quartet improvise with the utmost playfulness and freedom.