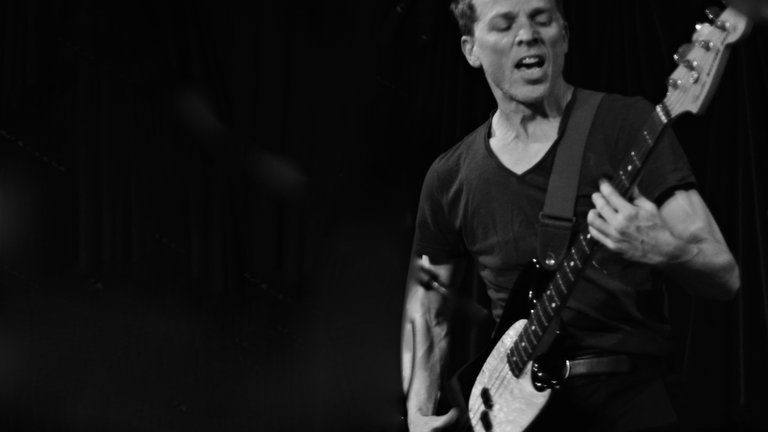 Cameron Undy’s new Twentieth Century Dog album, Bone, has left this reviewer speechless. Which is quite a feat in itself.

The only honest review I could give is “Go listen.” But my pen, once unsheathed, needs to talk, so talk it shall.

Listening to the remarkable improvisations that make up the ten tracks on Bone, I see not a group of separate musicians but a single organism – a big body with waving arms and heads – a Dog of Seven Heads. Surely this music cannot come from separate consciousnesses, even of those consciousnesses are as hyper-conscious as Simon Barker and Jamie Cameron and Ben Kidson on drums and percussion, Jeremy Rose on reeds, Greg Coffin on keys, Ben Hauptmann on guitar, and leader, composer, producer Cameron Undy on barking, growling bass.

The presser says these pieces are made up out of long buried ideas “dug up, buried in the yard, dug up again” over the ten years that Undy focused his energies on his iconic jazz room, Surry Hills’ Venue 505. These ideas shape the grooves and basic motifs of the improvisations, and also form ensemble sections that rise out of the music and then are gone as soon as they came.

The Dog is big on rhythm too – with two drummers and a percussionist, as well as having a bass-player as leader, it is inevitable that there will be grooves of all flavours, and rhythm games running through the music like pulsing veins. Funk, Afro-beat, jazz: all booty-shaking but mind-bending at the same time.

‘Tail of the Dragon’s’ melodic pass-the-parcel leads to some big-fun messing with time, its play extending into the band comping behind Coffin’s solo, then behind, in and around Rose’s solo. ‘Dog Day’ is taut funk which Ben Hauptmann nips and tugs at until it is reshaped in his image. ‘Bone’ conjure’s the same skull-grinning space-griots as Herbie Hancock’s Mwandishi band.

‘Broken Creak’ applies Broken-beat to some serious funk: the drummers slip in and out of sync with each other, like a musical moiré-pattern moving in and out of focus. Undy’s bass solo here is muscular and propulsive while Coffin’s soul-gospel piano passage moves against the lagging drums like a sermon that will not be denied.

Bone was recorded live at Venue 505 over two days in late 2016. The live recording brings so much out in the band (have I said before there is a strong argument at all jazz should be recorded live?), giving the album an in-the-moment electricity that charges the air.

It is not all funk and zap though; the three short interlude pieces – ‘Anagram’, ‘Sunrise’ and ‘Constellation’ – are welcome breathers from the tropical storm of Bone. Rose’s bass clarinet on the latter is particularly affecting, singing a folk-like song of universal longing.

Final track, the long workout ‘Bust Down_Parallelism’, captures everything that is good and real about Bone and Twentieth Century Dog. An almost endlessly inventive Hauptmann solo rises to a boil that bursts like a summer storm, washing away to a half-dark duskscape, only to rise through a percussion conversation into Jeremy Rose’s strutting tenor solo. Composition/improvisation. Magic While U Wait. It’s what the Dog does so well.

Ok, I will shut up now. Go listen to Bone.