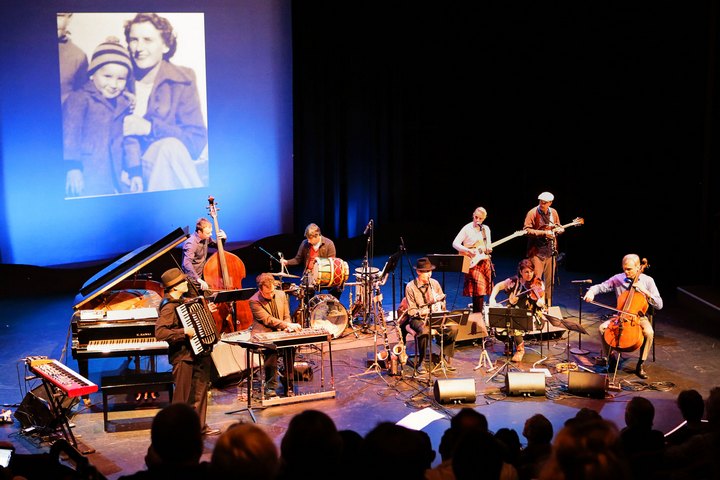 JK: How did you first get interested in music and what were your early influences?

GD: I was eight years old when I first became interested in music. I have strong memories of pestering my parents to buy me a piano accordion after seeing Rolf Harris playing it on TV. (circa mid 60s black and white TV). I started taking lessons in Blacktown with a little old Italian guy named Mr Wittie,  playing Italian songs, German polkas and French musettes. My grandfather was an amateur piano player and we had an old piano at home which I listened to him play. He dabbled with lots of instruments such as mandolin and the banjo and he bought me a little electronic organ on which I played pop/rock songs in garage bands with school friends. In my early teens I came across an Oscar Peterson vinyl, Tristeza, and was instantly captured by it. I quickly became obsessed with playing jazz piano, pretty much teaching myself through listening and copying Oscar’s style.  From that point on I starting procuring records by lots of great jazz piano players such as Duke Ellington, Red Garland, Hank Jones, Art Tatum and Wynton Kelly. Then I got into players such as Bill Evans, Herbie Hancock, Chic Corea, McCoy Tyner and Keith Jarrett, whose album, My Song was a particularly strong influence. Concurrent with this I was playing organ and listening to lots of the progressive rock bands of the day such as, Focus, Emerson, Lake and Palmer and Yes as well as singer songwriters like Joni Mitchell, Dylan and a host of others. I also started taking classical piano lessons and eventually got into the Sydney University music department where I studied with Peter Sculthorpe while taking jazz lessons outside the department with Roger Frampton.

JK: You’re a multi- instrumentalist these days playing piano, organ and accordion. How did that come about?

GD: Primarily the focus has been piano but there was a time early on when I studied classical organ and practised regularly on pipe organ. I have played lots of Hammond organ in soul/blues situations and currently I am very much focused on accordion which I play exclusively in The catholics. There’s no overarching plan, I am comfortable with all these instruments and enjoy discovering how they bring fresh and unexpected characteristics to the music I play.

JK: When did you first start composing music and from where did you draw your inspiration?

GD: I first started writing music in my teens. Composing has always been a natural extension of my playing, listening and study of other music. While I appreciate there are technical differences between the craft of writing and playing, I don’t subscribe to the idea of composer and performer as separate entities. To me they are part of the same continuum and there is a strong feedback loop between what I play/improvise and my composing. As to inspiration I am strongly drawn to the creative impulse itself which is a basic human trait. Of course we are products of our creative environment and draw inspiration from other musician/composers and musical cultures and styles. I am driven by the idea of finding my own way of expressing music both in my playing and composing.

JK: You’ve played with some of this country’s finest musicians and groups – tell us a little about that.

GD: I have had lots of opportunities to play with many amazing musicians. In recent years it has been particularly rewarding for me to play in bands such as Richard Maegraith’s Galaxstare, The catholics, James Greening’s Greening from Ear to Ear and the children’s band/TV series Lah Lah’s musical adventures as well as the musicians in my own bands and projects.

JK:  The Sanctuary project comes from a deep personal inspiration – tell us about that:

GD: Yes that’s true, this project deals with deeply personal experiences. I’m naturally drawn to storytelling and there were stories unfolding in my life which were personally all consuming. My mother had been diagnosed with Alzheimer’s disease and her health was deteriorating. I and my family were very hands on in caring for mum and her journey was front and center in my life. During this time (2010) my first grandchild was born and this proved to be an overwhelming experience for me. Live at the Village commissioned me to compose a major piece and after successfully receiving an Australia Council new work grant it was natural that these stories would form the basis of the work.

JK: It obviously took quite a long time to put the project together –  what were the challenges of doing a project of this size and complexity?

GD: How to relate the stories I wanted to tell presented challenges on many levels. From the conceptual point of view a sanctuary is a harbour or a safe place and above all else I wanted the music to convey a sense of this. In other words I wanted the ensemble sound and my music to in some way embody the idea of a sanctuary. Of course this is a wholly subjective process but I found the idea of creating a sonic representation of the meaning of Sanctuary compelling. The instrumentation I drew upon i.e. accordion, mandolin, strings, lap steel guitar and certain percussion sounds were central to my concept. I had little experience with many of these instruments and this proved to be one of the big challenges. Through much research and discussion with musicians I gradually derived a textural palette which I hoped would realise my musical concept. Musicians were very generous in the rehearsal process and lots of workshopping helped enormously.  One of the biggest challenges from the writing perspective  was trying to create a sense of continuity and development throughout almost an hour of music. There are  many  musical connections throughout the piece  and while there is no narrative as such, I am telling a story (or stories within stories) and needed to keep that in focus throughout the entire piece. In addition there were many logistical issues such as bringing musicians from interstate (Tunji Beier from Queensland and Lucky Oceans from Perth). I had to have several Skype rehearsals with Lucky. I worked closely with Mary Travers, who was deeply committed to this project, and the rest of the Live @ the Village team to bring many threads together.

JK: You assembled a wonderful and diverse group of musicians for Sanctuary – tell us about some of the players in the ensemble:

GD: I don’t think there’s any other band like it in Australia. One of my desires with this project was to bring together a diverse group of musicians that displayed strong individual approaches to their craft. They are from disparate backgrounds but unified in their openness to each other and to this music. Tunji Beier’s main instrument is the South Indian Carnatic drum, the Mridangam, however he is equally at home on many other Indian and African percussion instruments. He actually created a hybrid percussion/drum kit specifically designed for this music. Brett Hirst needs no introduction, a consummate musician who brings an enormous wealth of experience and flexibility. On guitars are Bruce Reid, lap steel and Jess Green, electric and acoustic, both of whom have a strong connection to roots music and loads of soul. James Daley on mandolin is carving out a solid niche as a performer and songwriter in the bluegrass and folk world with his band The Morrisons but also playing with band leaders such as Aaron Flower. The string section features Ollie Miller on cello and Veronique Serrett on violin, both exceptional players who have made a unique contribution in ensembles such as The Noise string quartet and the Australian chamber orchestra. Paul Cutlan is one of Australia’s finest reed players and the depth and invention in his playing is a constant inspiration to me.

JK: The music of Sanctuary defies classification into any one genre – how would you best describe it?

GD: I’m not sure I really have an adequate answer for this. different kinds of music. I love improvised music and electronics but am also into African, roots and folk music. What I can say about the music of Sanctuary is I made a deliberate attempt to be as spontaneous as possible when workshopping ideas and writing. When I’d found a melody or musical idea that connected with my concept I determined to present in as simple and direct way as possible. I didn’t want to overburden the music with too much complexity or artifice. I also sought to connect to musical ideas directly to the timbre or sound of the ensemble. Many different styles and influences came into the frame as I’ve alluded to above i.e. classical, jazz, bluegrass, electronics and Appalachian folk songs. Of course finding a synthesis of all this was a significant challenge (and an ongoing one).

JK: You opted for a unique recording process with the album – can you elaborate?

GD:  It was a rather serendipitous meeting with the engineer Ross A’Hern which led to recording Sanctuary in a unique and novel way. I wanted to record this music in a way that would be as true as possible to the natural sound of the predominantly acoustic instruments in the band. As happened Ross had just started his company, Mir Creation, with Ben Gurton and Jack MetCalfe focusing on high res/ surround sound recording. We all become excited about the Sanctuary music being an ideal vehicle for this approach. We then set about looking for a suitable venue in which to best realise the sonic landscape we were looking for, eventually finding the beautiful Cerretti chapel in Manly NSW. This space, with its amazing natural reverb, and acoustic/ aesthetic ambience offered tantalizing possibilities. There were many unknowns and it presented a steep learning curve for musicians, production crew (Ben Gurton made a huge contribution in this area) and engineer. We recorded live with virtually no overdubs or studio manipulation with the space becoming like another member of the band. Notwithstanding the challenges, everyone rose to the occasion and we could not be happier the result. I’ve have never been involved in a project where all the elements i.e. musical, conceptual and technical came together in such a unified way.

JK: Any plans for another live performance of Sanctuary following your highly successful Riverside Theatre concert earlier this year?

GD: The Riverside gig was a great event and we have had multiple opportunities now to perform this music. Audiences and critics have responded in an overwhelmingly positive way which is very gratifying. I’m hopeful of more performances and there are plans afoot but at the same I’m aware it’s a difficult logistical prospect with such a large band etc.