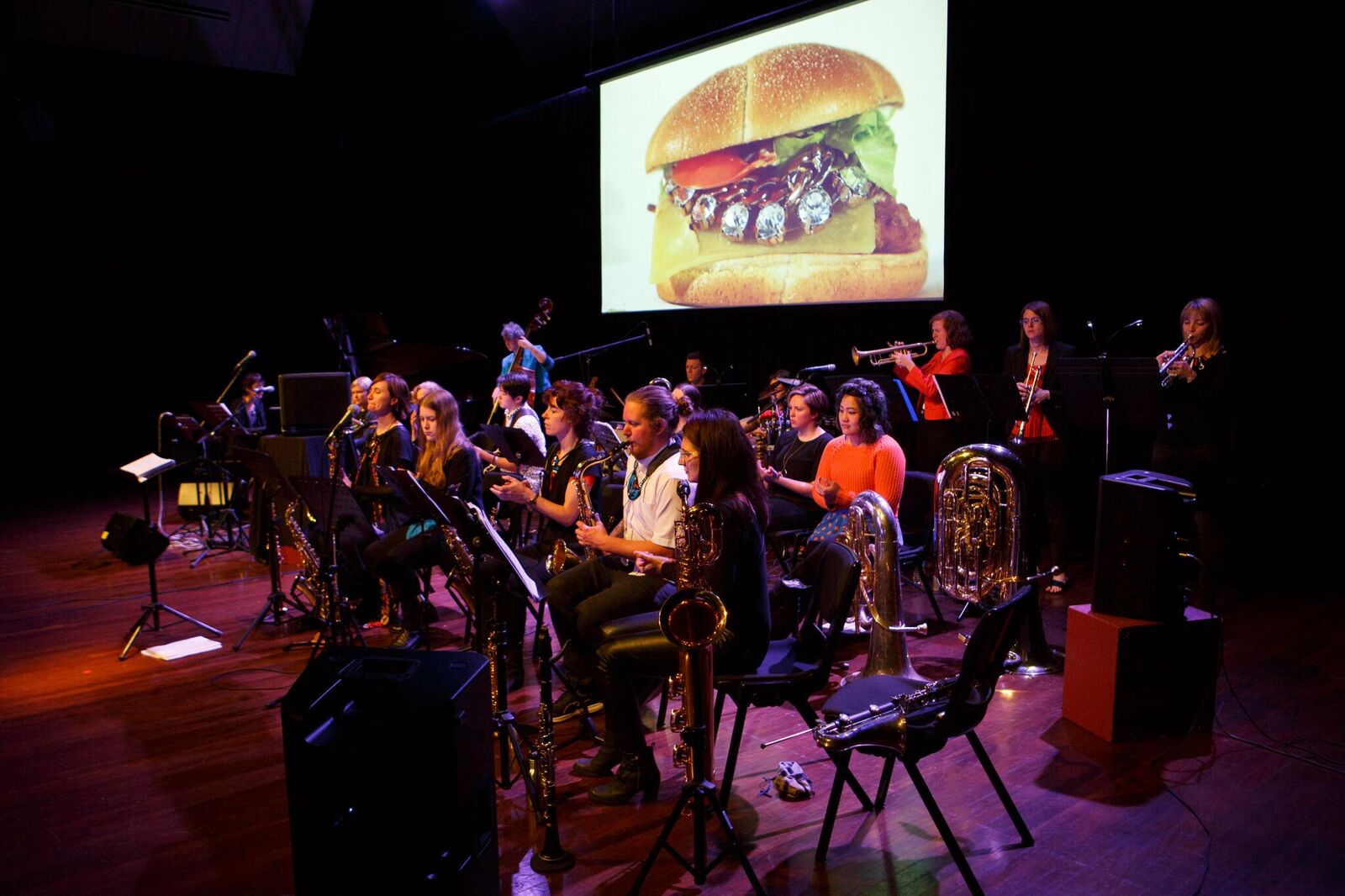 On Saturday, 5th August I check out the Sirens Big Band performance of  Ellen Kirkwood’s new suite [A]part. The show I heard (and saw) was the second of the evening in the intriguingly named Io Myers Theatre at UNSW. Io was, in Greek Mythology, the daughter of Zeus and is, in astronomy, the innermost Galilean moon of Jupiter.

It was fitting, as Kirkwood has previously drawn on Greek mythology in her Theseus and the Minotaur suite and also because [A]part took my head, at times, into the outer galaxy and beyond.

The themes of this multi-part, hour-long suite are however quite down to Earth. Composer Kirkwood takes on the big issues of this strange and cruel age: climate change, the refugee crisis and the myth of connectedness that is the broken promise of the internet. The title is a pictogram of the feeling of being at once connected and yet separate – a truly modern condition. 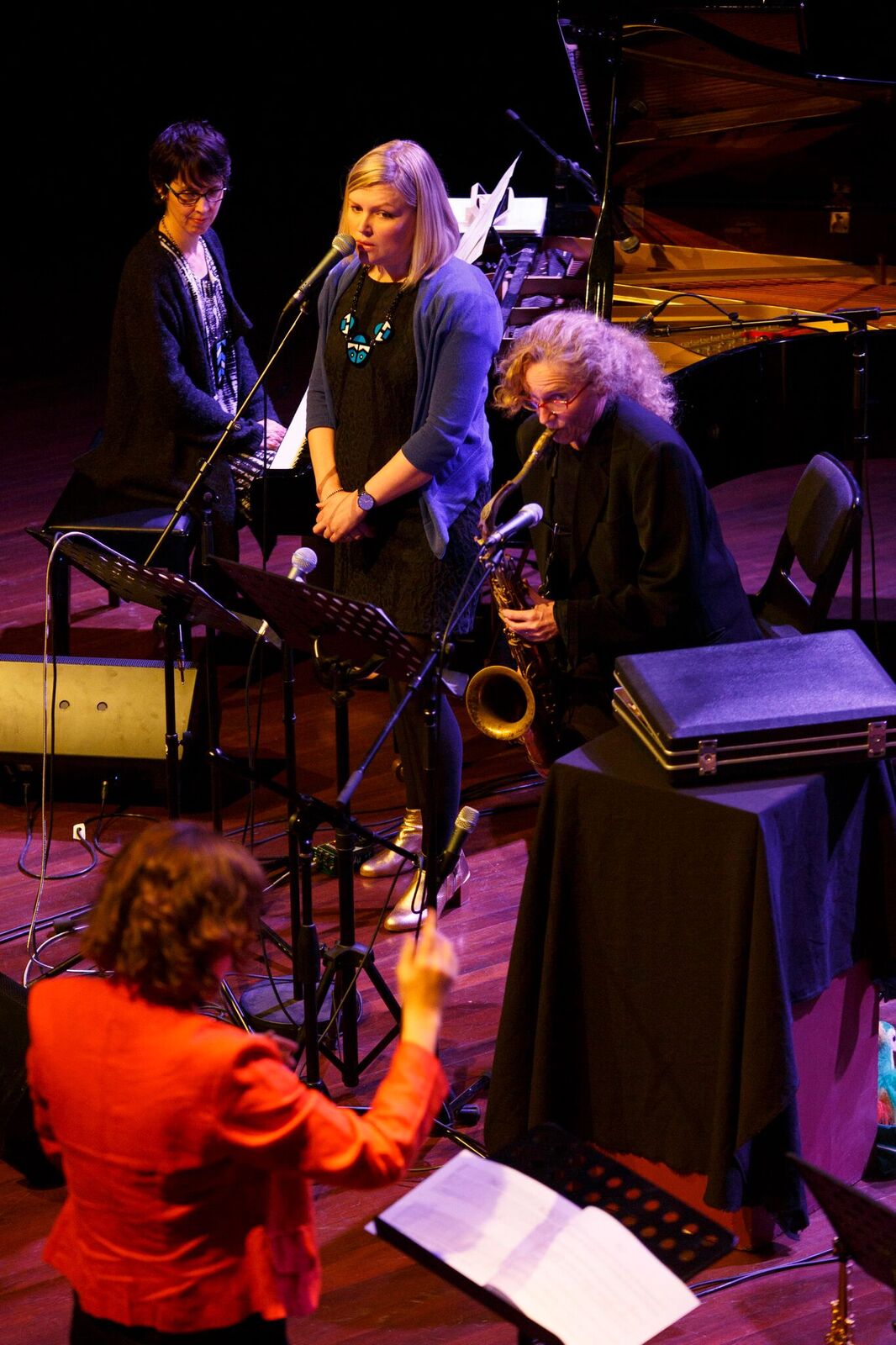 Whereas Theseus and the Minotaur combined music with spoken narration, [A]part works with visuals – Cleo Mees’ intriguing video projections: sometimes mysterious, sometimes sardonic and humourous, always startling, as is the music.
The ecological theme opens the piece with guest artist Gian Slater setting up, via loop-pedal, vocal drones onto which she adds layers of swishes, chattering and mouth percussion. By the time the horns enter with a fugue-like figure, you feel as if you are surrounded by nature: wind, animals, insects, rustling grasses.

Pianist Andrea Keller, also a guest of the Sirens, creates a typically unique solo against the rhytm of Alex Masso’s drums and Sirens leader Jess Dunn’s bass. Keller’s work throughout this performance is as imaginative, precise and exciting as one would expect from one of Australia’s finest. In a later unaccompanied solo her raw attack had a few of us sitting up straight in our seats.

The third [A]part guest artist is saxophonist Sandy Evans, a mentor to the Sirens from their beginnings in 2010. She seemed to take great inspiration from Kirkwood’s music on the night – a soprano solo beginning with a scream that was a little too human for comfort; yet later accompanying a faintly demented and disintegrating Balkan waltz with a barrage of kazoos, razzers and squeaking rubber duckies.

And that ¬– from anguish to giddy silliness, and everything in between – is the scope of [A]part. It is a massive piece in every way: challenging to the ear and the mind, highly original (as we know Kirkwood to always be), often cerebral and abstract, all the time threatening to be too much to take in in one sitting. But what saves it from possible overwhelm is that Kirkwood never loses the emotional thread in the music; it is human music and it consistently makes you feel. Sometimes, as with all valid contemporary art, those feelings can be baffling or even plain uncomfortable, but you do feel them deeply.

Kirkwood’s writing here, as in everything I have heard from her, is smart (without ever being clever-clever), dynamic and imaginative. The task she has taken on with [A]part tests her formidable skills as a composer/arranger, yet she never seems to run out of ideas, always finding new sound possibilities and textures to be gleaned from the big band.

She uses hand-claps in polyrhythm from the various sections. She has Jess Dunn rattle her bow around on the wood of her bass, making harsh knocking sounds (which she then contrasts with airy flute textures answering the knocking). She has sections play against each other. She has sections slip out of synch within their ranks. She writes starkly dissonant brass sections which unfolds into satiny 40’s dance orchestra textures (albeit a dance orchestra which slowly dissolves and decays).

Yes, [A]part is massive in every way (it took almost a year of writing and rehearsing and the mentorship of stellar pianist Barney McAll to, as Kirkwood says “Get this music out of my brain”). It is ultimately a massive experience – massive in immersion, like rolling in the currents of an ocean, and massive in response: the music, together with the power of the visuals leave you feeling wrung out and a little wired.

I cannot imagine how Ellen Kirkwood will ever top a work such as [A]part. I know of course that, given what we have seen and heard of her up to this point, she undoubtedly will.