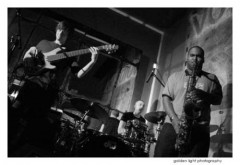 I remember distinctly the feeling of loss that came over me as I realised that K would be no more.

Grant Windsor and Graeme Blevins, the creative force behind the group, had (rightly) made the decision to move to the UK to explore opportunities to further their careers.

Although perhaps not a regular at their weekly gigs at the Leederville Hotel and subsequently the Llama Bar, I still recall sitting in on an early studio session in 2001 with Daniel Susnjar on drums and ‘new’ bassist Dane Alderson.

I remember thinking at the time how polished the band’s performance was, and how priviledged I was to be witnessing the recording of such incredible musical talent. And that Dane’s criticism of his already exceptional playing would lead him to greater heights. Age, I felt, was incidental to the talent and potential of these phenomenal players.

Daniel Susnjar, co-founder of K and an important creative contributor then made the brave decision to leave the band to pursue his own musical direction. Although an initial shock to the band and others, and with an ArtsWA funding submission being prepared for recording of their first album, the momentary uncertainty was soon alleviated by the introduction of young drummer Andrew Fisenden to the group.

Although Graeme and Grant were the main writers for the band, Dane and Andrew, friends since early childhood, brought a new dimension to ‘K’, helping to define their sound on the albums ‘New’ and ‘K Live’.

K’s final concert at the Rosemount this year was a testament to what the group had achieved over its short history.

With over 750 door sales and around 250 CD sales, ‘K’ managed to achieve something that few other jazz-oriented groups have been able to achieve. They proved that a jazz-oriented group playing their own brand of original music can generate an audience – an audience of music lovers of all ages that fully supports their music and that will come out to listen to them whenever or wherever.

And so to the void……

The void created on the departure of Graham and Grant to pursue their careers in London, and the subsequent disbanding of K looked like it would be difficult to fill. But, just as the realisation of the void created was setting in, the Llama Bar residency was soon taken up again by a newly formed group, coincidentally named Void, having taken their name from the banner which acts as a backdrop to the stage area.

The two youngest members of K, Dane Alderson and Andrew Fisenden were joined by fellow James Morrison Scholarship winner, Troy Roberts and Freedman Fellowship Finalist, Tom O’Halloran. And so Perth had another supergroup in the making.

Within a very short space of time, the Llama Bar was packing out again to hear the energetic brand of jazz fusion that Void is making its own, to the delight of local audiences.

Barely six months on, they have quickly become one of Perth’s hottest new acts, a fact confirmed by their nomination this year in the the WAMi Best Jazz Act category, alongside long-time favourites, Hip Mo’Toast.

Both these acts can be seen this Monday 21st February at the WAMi showcase at the Perth Jazz Society from 8pm.

And following a hugely successful live recording at the end of last year, look out for Void’s debut CD later in the year….it will be one of the must haves of 2005.