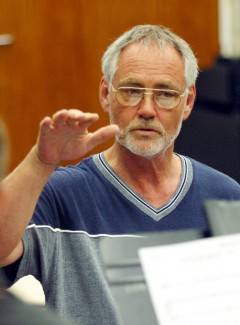 Graeme Lyall can rightly be described as an icon in the Australian music industry.

In a career spanning over 40 years, he has excelled as a saxophonist of international standing as well as acting as a mentor, confidante and inspiration to hundreds of aspiring young musicians across Australia. Graeme has a long and illustrious career as a musician, arranger, composer, musical director, mentor and university lecturer.

He is currently Acting Head of Jazz Studies at the WA Academy of Performing Arts (WAAPA), Edith Cowan University and Artistic Director of the WA Youth Jazz Orchestra (WAYJO). During the last 8 months, Graeme has also found time to perform at the Melbourne Jazz Festival, record an new CD, write original compositions for an Australia Council grant, and encourage and inspire the young composers from WAAPA and WAYJO.

Graeme commenced his professional career in Melbourne at the age of 17. Within five years he was appointed to a position with the TCN 9 Orchestra as a musician and arranger for great artists including Bobby Limb, Dave Allen, Don Lane, John Laws and Stuart Wagstaff. His passion for supporting young musicians was evident even in the early stages of his career. Graeme has produced, arranged and conducted for a who’s who of Australian talent, often employing young instrumentalists in recording sessions to give them exposure to a professional environment. He was a member of groups such as the Daly-Wilson band and the Tommy Tycho Orchestra. In the latter capacity he performed for the Queen at the opening of the Sydney Opera House in 1973 and just over a decade later was the Musical Director for the Royal Gala Concert in the Melbourne Concert Hall during the visit of the Prince and Princess of Wales.

Accolades include writing the winning arrangement at the Yamaha International Song Festival four times between 1974 and 1979; arranging and composing television themes such as “Willesee”- and “Special Squad”; composing, arranging and conducting the music for RFL and AFL Grand Finals and winning the Australian Writers and Art Directors Guild Award for the Best Music for a Television Commercial in 1987. High profile engagements include performing as the Musical Director for the Don Lane Show, Logie Awards, Carols by Candlelight and Hey Hey It’s Saturday where he literally launched the careers of a number of young musicians.

He has composed and arranged for events ranging from the AFL Grand Final to recordings for Olivia Newton-John, Debra Byrne, Colleen Hewitt and Normie Rowe and a plethora of visiting overseas artists including Sammy Davis Jr, Tony Bennett, Tom Jones and Roger Woodward. In his role as Artistic Director of the WA Youth Jazz Orchestra, Graeme has enthusiastically promoted emerging artists.

His measure of success is reflected in the range of students who have rapidly moved into the professional music sphere both in Australia and overseas. Four James Morrison Scholarship winners and all the Wyllie Scholarship winners have emerged from within the ranks of WAYJO. In addition WAYJO provides a unique forum for students of composition to write original pieces for ensembles ranging in size from swing bands to full fifty piece orchestras.

In addition to the motivation and inspiration he provides to the students, Graeme has established himself as a mentor and confidante to the musicians of the orchestra. The Orchestra’s overall success is rightly attributed to Graeme’s influence. The loyalty he has built up over a period of a few short years is exceptional. Testimony also to his reputation is the involvement of international music “greats” such as Frank Foster from the Count Basie Orchestra who was an artist in residence with WAYJO and enthusiastically became a patron of the organisation. WAYJO is delighted to have had the opportunity to nominate this truly gifted and deserving musician and to see Graeme gain national recognition for the outstanding achievement and contribution he has made to music in Australia.