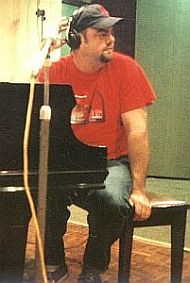 Sam Keevers is thought of by his musician mates as the original 'Mr Nice Guy'. And aside from being a thoroughly good bloke, he also plays piano like an angel.

I caught up with him at Mario's café – a Melbourne institution in Brunswick Street, Fitzroy with waiters in long aprons and the best coffee on the street. And as if I needed confirmation about how people feel about Keevers, he was on first-name terms with all the staff, and they were so familiar with his habits they were making his next cup of coffee before he even realised he wanted it.

Miriam Zolin: The first time I saw you play was at the launch of the Red Fish Blue CD 'Deep' in Sydney. You and Simon [Barker, drums] clearly have a real connection. Simon seems so relaxed when he's playing and the two of you had great rapport.

Sam Keevers: Yeah, I wish I could be as relaxed as him sometimes when I watch him play, but he's really working on that –that's his main thing at the moment I think.

In terms of what's been important when we've been playing together, we've sort of been on the same trip.

MZ: Forgive me, I have to ask. It's my job. Why are you a musician?

*SK:*I actually remember the moment I decided I was going to be a musician. I was fifteen, and I was playing in a school band that wrote a revue, for the International Year of Peace, in 1985. We had a rock band at school and I was writing songs then – pretty bad ones but… We were playing King of Pain by The Police and I thought 'this is what I want to do. I want to do this for the rest of my life'.

And then that same year, I went to see the Sting band and I saw Kenny Kirkland and I just knew I had to learn how to do that.

MZ: And that's when you started working on it?

SK: Yeah, I started getting into jazz. I mean through that Sting band, I started buying records by other guys. I bought Branford [Marsalis] records and I eventually just branched out.

My dad had a couple of cassettes that he always played in the car. One was John Wesley Harding by Bob Dylan and the other one was this Fats Waller record. We used to listen to them going to cricket training or whatever. So my first attempt at playing jazz was really trying to play like Fats Waller, trying to play stride and I really didn't know how to do it, so. That was sort of where it started.

When I left school, I went to Law school but hated that. I just really wanted to play music.

MZ: So were you playing music when you could, squeezing it in somehow?

SK: Actually, the music took over. I only went to law school for a year and ended up being thrown out because I ended up cutting classes and just practicing the piano.

I did an audition for the conservatorium and got into the jazz course up there in 1989.

It was funny – when I first left school I applied to go to law school and I also applied to the Con [Conservatorium of Music, in Brisbane]. I rocked up to the audition, not knowing that there was a jazz course. I thought you just played what you played and then you would get in if you were good enough. So there's a panel in front of me and I'm playing Fats Waller stride and they’re all classical guys. They just had to stop me and say 'Look I think you've got the wrong course. This isn't a jazz course.'

I said 'Oh, right' and I just left and that was it. Later I realised that you have to actually apply for a jazz course. So went to the head of the jazz course – he was a piano player – and I just said I want to get lessons. I said 'Teach me so I'm good enough to get in to the course', and that's what he did.

MZ: Where were you playing first? What was your first experience of performing?

SK: I used to play cello – I used to play in a string training group for the Queensland Youth Orchestra in Cairns so we did a lot of concerts with them. But the first times I played jazz were probably just little gigs in Brisbane. I was really only still learning how to play jazz with a band so I didn't really do many gigs until probably my second year at college.

Places like the Brisbane Travelodge – there's a jazz bar there. Some friends and I from college also got together a demo tape and went around and hustled the gigs around Riverside, the development near Spring Street there and we ended up getting a gig in a café there. But I really wasn't playing that much – I was learning.

SK: I did actually. In fact, the first thing was that I really wanted to get a degree. The Con offered an Associate Diploma in music. At that time, the only places you could get a degree were Melbourne Victorian College of the Arts (VCA) and Adelaide.

I sent an audition tape to Melbourne and Adelaide and I didn't get into Melbourne. And I was all packed up and ready to go to Adelaide and at the last minute VCA called me and said there's a spare place if you want it. So that was Friday afternoon – Monday morning I was in Melbourne.

So I came here, and ended up getting a credit for a year off the degree. But around that time the Vizard Show [a late night chat format television show] started and they had Paul Grabowsky's band.

Someone had just given me a recording of the Wizards of Oz CD 'Soundtrack', with Dale Barlow [saxophone], and Paul Grabowsky [piano] and Tony Buck [drums] and Lloyd Swanton [bass]. I heard that record and it kind of changed my life. I wanted to come and learn from Paul. That's all I wanted to do. So that's one of the main reasons I moved here. Firstly because he lived here, and also because the VCA course was here.

MZ: What is it /was it about Paul's music or Paul generally that attracted you?

SK: I really loved his piano playing. There was a kind of a soulful thing about it and the fact that he was Australian too. I'd never really heard Australian players play that well before. I was still learning. But there was something about that album. I just loved the vibe of that record. I really took to Paul's playing.

MZ: So were you learning with him at the VCA?

SK: No I wasn't. He wasn't teaching then. He was too busy doing the show. I was actually learning from Mickey Tucker at VCA. He's an incredible American Pianist who moved out here. He used to play with Art Blakey and the Benny Golson Jazztet. Incredible player. But I did end up having a lesson with Paul. I had one lesson with him when I worked up the courage to give him a call.

MZ: So you’re trying to find your own creative direction, but you need that input, don't you.

SK: Exactly. You need that inspiration. You need to get out and see someone who is way better than you are – and I just wasn’t getting it in Brisbane at all.

There some great players that I played with who inspired me who were a lot better than me – like someone like Elliot Dalgliesh for example who introduced me to John Coltrane and he was great for me because he was way ahead of me when I was that age.

He was saying 'listen to this", or "Play this tune". He was fantastic for me. He opened my mind right out there. He's an incredible saxophonist.

MZ: I love the music on the CD Deep. I call it 'music to fall in love by'.

It's kind of –where Simon [Barker] and I come from. Yeah it's sort of melancholic. I have a tendency to go for that in all types of music – most of the singers I listen to are soul singers. It's something about being hit in that place. I want to be hit there every time I play and listen to music.

MZ: I hear you. Give me a CD full of music and I'll pick the ballad every time.

MZ: Tell me about being part of the Vince Jones band.

SK: That was incredible for me. Because when I was 17 I heard Vince for the first time and I just said I want to play with him one day – and I got to do it.

That band on the Live CD was a great band – with Simon [Barker, drums], Adam [Armstrong, bass] and James [Muller, guitar]. I did love that band

I learned so much from playing with Vince, especially about accompanying singers and stagecraft; presenting yourself and working out arrangements for live gigs. Vince said many times that he believes that the stage is a sacred place and when you're on stage you need to respect that.

So the hardest thing I found about playing with Vince was that the only pressure he put on you was that when you were on stage with him you had toplay to the best of your ability every night. Night after night of that pressure used to freak me out. I loved it because we made some incredible music together but after a gig, even though I might have enjoyed it, the sense of relief I felt at getting through another gig was quite amazing.

MZ: Did that pressure help you as a musician?

SK: Yeah, every other gig just seemed like a breeze after Vince. It's a confidence thing. Achieving at that level gives you confidence.

MZ: Given the size of the scene here, do you feel positive about being able to continue living as a musician?

SK: Well I do actually. I don't think I'm ever going to be able to make a lot of money, but that's not the point.

The hardest thing I guess is touring in this country because it's so expensive. Small regional centres, large distances…For example, I would really like to tour my Latin band [Los Cabrones] but there's fifteen of us – that's about $3,000 to 4,000 just to get to Sydney.

I do a little gig on Thursday nights at the Cape Lounge, just down the road here. And there was a point in my life where I would actually have said no to those gigs because the money wasn't good enough and I felt that musicians were being ripped off by being paid so little.

But now I really like that there's this little place, with a little scene and you can go there every night of the week and musicians are really playing music from the heart. I've kind of let it go that we don't get paid that much. That's not why I'm doing it. I think little gigs like that are important for a scene, whatever town you're in.

This interview first appeared on www.allaboutjazz.com