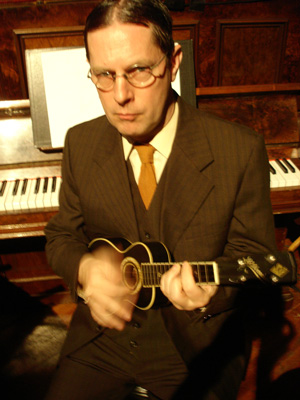 Phillip Johnston is a composer and musician originally from the USA.  During the 1970s he met and formed relationships with some of his earliest musical associates (John Zorn, Joel Forrester, Dave Hofstra, Eugene Chadbourne). His ongoing music groups include The Microscopic Septet (with pianist Joel Forrester).

Throughout the 80s and 90s and early 2000s, he worked as a leader (The Microscopic Septet, Big Trouble, Transparent Quartet) co-leader and sideman (Mikel Rouse, Kitty Brazelton, Bobby Radcliff), and began a parallel career in composition for film, theatre, dance and the concert hall. He has a particular interest in contemporary scores for silent film.

Phillip currently lives in Australian with his family but travels regularly to New York and Europe to perform, collaborate and record. Amongst his many projects is a new work in collaboration with Art Spiegelman which will premiere at the Sydney Opera House in the Graphic program.

JK: How did this project come about?

PJ: Jordan Verzar of the Graphic Festival approached Art about doing our collaborative musical, Drawn To Death: A Three Panel Opera at the Sydney Opera House. For various reasons that wasn’t practical, but Art proposed our doing a project based on the wordless novel instead. From that beginning, grew a project which now covers quite a broad range of territory.

JK: Have you collaborated with Art before?

PJ: Yes. For five years we worked in New York on the above mentioned opera/music theatre project (D2D), from about 2000-2005. We did workshops all over the country, but although we generated a lot of enthusiasm, no theatre company ever agreed to produce it in its entirety. It remains unproduced, although it is complete through a rehearsal draft. We still hope one day to realize it.

Art also did the cover for the Cuneiform Records 4 CD release of the ‘History of the Microscopic Septet’: Seven Men in Neckties and Surrealistic Swing.

Art and I were ‘drawn’ together by a love of both the early history of comics (Herriman/McCay), the San Francisco underground comix (Crumb/Spain/Wilson) and contemporary graphic novels (Ware/Deitch/Burns/Clowes), and our love of 20s jazz and novelty music. Also we dress alike.

JK: What can we expect from the show?

PJ: Wordless is a hybrid performance — part lecture, part concert, part film, and part slideshow.  Art Spiegelman gives the audience a crash course in the history of the graphic novel and some key influences on his work, narrating along with projected images.  Phillip Johnston leads a band of six musicians that score silent films projected during the performance.  The show lasts approximately 90 minutes. These ‘silent films’ are not really animations per se; they are enhanced slide shows of graphic storytelling from the late 18th Century to new work that Art has created specifically for the show.

JK: What is the most challenging thing about writing music for silent movies?

PJ: What is challenging is not the writing, but the performing. Staying in sync with the film means a band stopping and starting together, shifting tempos and meters on a dime, playing in numerous different styles, and maintaining constant awareness and attention, as well as playing more or less continuously for 60-120 minutes. It is exhausting, terrifying and exhilarating.

JK: What is the best thing about writing music for silent movies?

PJ: There are many so things that make contemporary scores for silent film very different from contemporary sync sound film scores. One is that, since there is no other audio, there is usually music all the way through the film – it’s a chance to create a music work in long form. There is no dialogue to stay out of the way of, and no songs off of pop records jimmied into the soundtrack. In addition, the excitement of live music performance with a film enhances the experience for the audience – it’s like watching trapeze artists at the circus. Contemporary music can bring to life a film that to some feels like a historical artifact, although to me silent films seem more ‘real’ than contemporary films.

JK: What other projects do you have in the pipeline?

PJ: My upcoming projects include a number of works in development. Next week we are doing a development workshop at Merrigong Theatre of the musical I have been working on with playwright Hilary Bell: Do Good And You Will be Happy, based on Cole’s Funny Picture Book, a fantastical 19th Century Australian children’s book. We are working toward a production in 2015. In addition, I am doing the second performance of my score for Lotte Reineger’s The Adventures of Prince Achmed (1926), a German silhouette animation that many consider to be the first feature-length animated film. It will take place at the Lennox Theatre at Paramatta Riverside Theatres at 3PM on Sunday, September 15th. I’m also working on a new recording of the group, The Microscopic Septet, which I am going to record in New York in November. In Sydney, I’m performing with my group, The Coolerators, at the new jazz club Foundry616 on Wednesday September 11th, and with a collaboration between myself and Melbourne pianist Jex Saarelaht, Tight Corners,  on Oct 19th at the Sound Lounge and Nov 3rd at the Wangaratta Jazz Festival.

And of course, Wordless! with Art Spiegelman will be premiered in the Concert Hall of the Sydney Opera House on Saturday October 5th at 3PM.

The Adventures of Prince Achmed