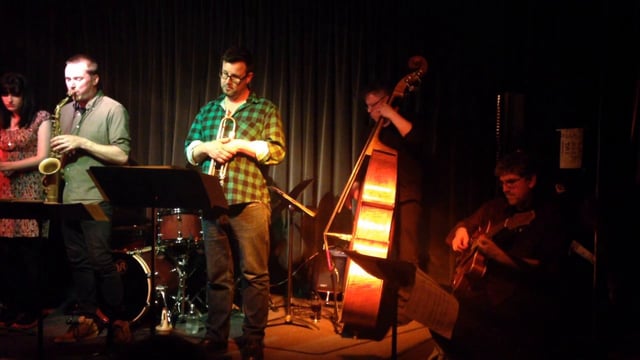 This fifth CD from the Melbourne quintet led by drummer, composer, and poet Allan Browne sadly will be the last, since after launching the album at the Melbourne International Jazz Festival on June 1st, Browne died in hospital on June 13th aged seventy.

He had undergone a lung transplant in 2002, subsequently releasing an album entitled Cyclosporin, the name of a drug which Browne claimed saved his life. Courageously he kept joyfully playing drums, often while connected to an oxygen cylinder. An irreplaceable stalwart of the Melbourne jazz scene, and a fascinating human being, Browne led a house band weekly at Bennetts Lane for fifteen years, and enjoyed a career in both traditional and contemporary music for fifty. His many fans will remember not only his marvellous drumming, but also his original poetry recitations.

It was his love of poetry that led to two previous original albums portraying poems by Arthur Rimbaud: A Season in Hell, and The Drunken Boat. The new album celebrates Browne’s favourite poem: Homer’s Odyssey featuring compositions from each band member in a vast and impassioned suite.

On The Deck, the first of eight tracks, begins in an out-of-tempo leisurely mood with guitar, sax and trumpet notes as gradually drum rolls arrive and a rhythmic theme develops featuring Eugene Ball’s trumpet. Phil Noy’s alto sax and Geoff Hughes’s guitar join in as Nick Haywood’s bass emerges and Browne lays down a medium-slow tempo using multiple diverse effects. Noy’s masterful solo introduces another from Hughes’s hastening guitar as the whole ensemble then wanders freely to a conclusion.

Noy’s composition Calypso features a post-bop theme over a subtle Caribbean rhythm and vivid solos from sax, trumpet and then guitar with ceaselessly inventive drums. Memory and Kharis begins briskly with the two horns underpinned by adroit guitar chords ahead of a lift-off trumpet solo interwoven with spectacularly effective drum stick-work.

The Lotus Eaters opens with mysterious trumpet and alto giving way to a guitar riff under some swift bass work from Nick Haywood. There are long-held cryptic harmonies from trumpet and sax while the guitar picks out a mystical motif. At the launch Browne announced that he thought this piece must have been written by Ball while ‘staring into a lava lamp.’

There is smart guitar and percussion duo work in The Suitors, as drums maintain imaginative mobility under high-register trumpet and continue during a bass solo’s added action.

The finale, Peace at Last supplies a dramatic soundtrack of a steadily marching beat of bass and drums for Browne’s husky reading of the closing stanzas of Homer’s famous work from 800BC.

It’s sad to realise that Allan Browne has unknowingly recorded his own epitaph, but this is a eulogy of which he would have heartily approved.