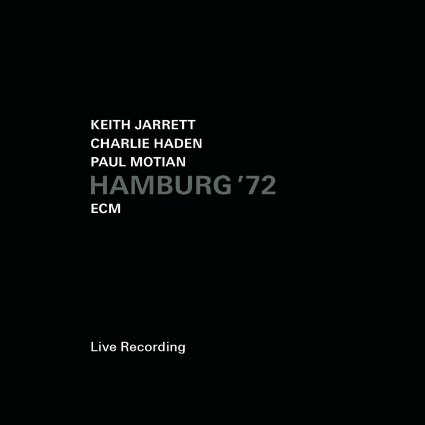 This release is important in several ways: it’s a previously unreleased remix of a German radio recording of a live concert in 1972 when this trio was at its peak; drummer Paul Motian died in 2011 and bassist Charlie Haden in 2014, making the collection an unrepeatable souvenir; and the album features rare examples of Jarrett playing soprano sax and flute.

The opener, Rainbow, a composition by Jarrett’s first wife Margot, starts with a lyrical solo piano before Motian initiates the rhythm with his characteristic, economical use of the ride cymbal. Jarrett’s solo flows quickly in unbroken lengthy runs as Haden’s unerring selection of underpinning notes swings in. The piece concludes with solo piano alternating between heavy percussive and softly subdued chords.

Jarrett takes up a flute giving an eastern aspect to Everything That Lives Laments, as the bass supplies a consistent series of riffs and Motian adds percussive effects before Jarrett returns to the piano firstly for a staccato sequence that concludes with big luscious chords. Piece For Ornette has Jarrett blasting wildly on up-tempo free-bop soprano sax as Haden and Motian produce expert rhythmic dynamics born of their five years working together.

The sole Haden composition, Song For Che, amongst four by Jarrett, opens with a substantial bass solo and various percussive accompaniments ahead of Jarrett’s return on soprano sax, this time embodying romanticism as Motian slams and shakes and Haden takes up the bow for a mysterious piano to emerge, leaving bass and percussion to finalise.

This beautifully recorded concert by three young players – Jarrett was just 27 – is a retro classic.