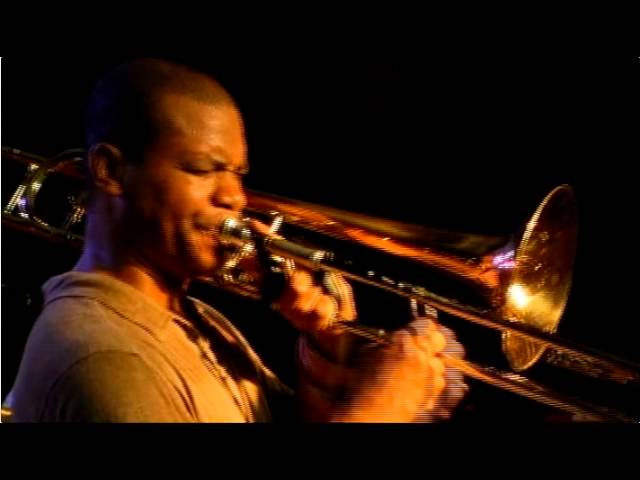 This is the first big band album from US trombonist/composer Robin Eubanks who took a year’s sabbatical from his lecturer’s position at Oberlin College, Ohio to complete these works for a 19 piece band.
Some of the tracks were originally written for bassist Dave Holland’s Quintet, where Eubanks played for over 15 years, but he says: ‘The big band allowed me to really flesh things out.’ This follows Eubanks’s 2014 release Klassik Rock Vol 1 exploring the incendiary rock, funk and fusion of the 60’s and 70’s with which the 60 year-old grew up. Several of the top-class sidemen from the earlier collection also appear here including the late trumpeter Lew Soloff in his final recording session.

The title track opens with staccato horn clusters and settles into an ensemble vamp with a driving piano sequence from Glen Zaleski and a fast and fiery tenor solo by Marcus Strickland.

Blues for Jimi Hendrix features Eubanks on electric trombone – an odd-sounding mix of trombone and electric guitar – a jazz rock piece with powerful echoes of Hendrix’s playing, aided by organist Mike King’s swirling vibrato and a heavy beat from drummer Nate Smith.
The leader delivers a completely different, swinging trombone solo on Cross Currents and Soloff on an upper register trumpet excels as does Lauren Sevian at the other end of the scale on baritone sax, all pushed along by intelligent drumming.

A highly-listenable album of big band mainstream swing, both raw and polished in Eubanks’s comprehensive arrangements.