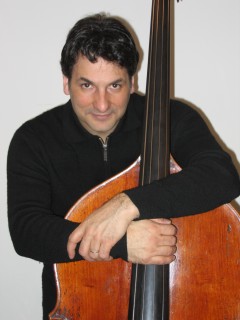 Mr John Patitucci, bass maestro was here in Melbourne, speaking before our very eyes! For me this was the most exciting of the master classes on offer during UJM05.

Arriving a few minutes into the well attended class, I noted that the gender balance was slightly better than the last bass master class I went to with rock bass supremo, Nathan East, where I was the only female.

John Patitucci was speaking about the best way to earn a living as a bass player: “The thing that will get you the most work is the time. The first question (musicians) asked about bass players is: ‘how’s the time?’, it doesn’t matter how beautiful you play.

“As a bass player you need to make the metronome your friend, and if it isn’t already it should be. Practice on two and four, but also practice on one and keep it steady. The more the beat is internalised the better. You have to internalise the time. And you have to challenge yourself with different tempos. For example: if you are playing live on a medium tempo you’ll often end up playing faster towards the end of the number, way faster. At different times I’m more comfortable with different tempos. It changes throughout life, but you have to learn to feel great with every tempo.

On Ballads: “Young musicians will get to the solo and double it up, but I say: No! You should feel comfortable and relaxed no matter if the orchestration is sparse or dense, but with the bow it’s another matter.”

Patitucci admitted to the class that he doesn’t have much of a practice routine nowadays, as he has two small children. “But with practicing you’ve got to be honest with yourself and work on the different areas of your work. Be honest with yourself, that’s the main thing.”

“I’m spoiled now when it comes to drummers, but I think the most important thing when working with a new drummer, is connecting with them. They are all different people, from different cultures. I watch the body language. What’s the physical experience of the beat? Watching and listening that is the way to work well with drummers. Some bass players think that their conception is the beat, but that’s not the way to make music. With less experienced drummers it’s hard, if some drummers are rushing you can’t hold them back. It’s not about being right, it’s about being one together and it’s not an exact science. I try to enjoy the difference with each person.”

“Sometimes I do adjust my sound to different drummers, but it depends on the drummer. DeJohnette has really dry cymbals and I enjoy that but with other drummers using that kind of cymbal I’m not so comfortable.”

On Action: “Ron (Carter’s) thing is you should be able to put a pencil under the G string. I like mine not high and not against the wood either. I don’t like super low action. You need room to draw the sound out of the instrument. You can’t push the sound in. Electric basses should sound good when you pick them up before you plug it in.

On working with Wayne Shorter: “Everyone is a composer with the group. Anyone can cue the next piece. It is different every night. It’s about composition: not playing the head, then you blow, he blows. Wayne Shorter likes to take people on a journey. It’s more important to touch people than to just play great. Wayne says: ‘I want to hear the struggle of composition’

“If we were abusing the traditional roles of the instrument it wouldn’t work. Sometimes I lay out, because as a composer that’s the best thing to do. Bands that play mezzo forte for the whole set, that’s really boring. If you took classical musicians to a gig like that they would think it was really boring.”

“Playing with Wayne has made me bolder, he’s been affecting me as a musician since I was 8 when I first started listening to him. He is nurturing and encourages me as a composer. Chick was like that too.”

“There’s a difference between being a musician and an artist. You’ve got to tell a story and touch people, every time, on stage. It’s a challenge! He’s 72 and he’s kept expanding, each time he goes onstage.”

“The bass demands that you’re in touch with your body. With the double bass (if you’re moving from electric) the stamina will come form years and years of practice, water and blood blisters. But it comes, but don’t practice with tension.”

On comping: “In teaching I’m rough on that…if the students are not connecting. If you’re comping you must connect with the drummer. Herbie is one of the greatest compers ever. You’ve got to be… sparring with drums. At the same time, you’re feeding the soloist, not overpowering, setting up the composition to bring in the line. It’s aggravating when the piano buries you or does nothing. Schofield is an amazing comper. Kenny Baron too, but Herbie Hancock is a killer comper.”

“For the bass if there’s no comp instrument, it’s liberating. Joe Henderson and Al Foster are great examples of how to play without comping. Remember not to overplay because if you are playing solo without comping people will her every subtlety.”

Equipment: “You have to choose wisely, but, the sound is in your hands. You should experiment, invest in the best clip on you can find, the best pick ups, the best mic.”

Odd time signatures: “If you can get into a groove if you are playing seven maybe think about it as 14 or if you’re playing five, think 10.

Walking bass lines: “You have got to hear the changes. I make my students listen to the masters and transcribe, (musicians like) Ray Brown, Ron Carter. It’s about architecture. People should know what tune you are playing. If you want to hear really good walking bass lines you should listen to Vivaldi and Bach those were the first walking bass lines.”

John Patitucci treated the class by performing a beautiful piece all on his own. He is an amazing artist, his playing is sublime. He has a warmth and generosity of spirit about him too.