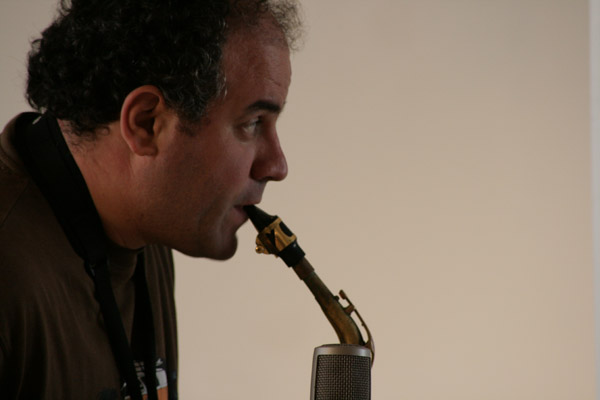 An interview with Raymond MacDonald.  A regular visitor to Australia, Raymond MacDonald is a saxophonist and composer who has released over 50 CDs and toured and broadcast worldwide. He has written music for film, television, theatre, radio and art installations and much of his work explores the boundaries and ambiguities between what is conventionally seen as improvisation and composition.

Collaborating with musicians such as David Byrne, Jim O'Rourke and Marilyn Crispell his work informed by a view of improvisation as a social, collaborative and uniquely creative process that provides opportunities to develop new ways of working musically. He is a co-founder of the Glasgow Improviser's Orchestra.

He plays in many collaborative free improvisatory contexts and his roots in jazz and pop music can also be heard in his playing and writing. He is also Professor of Music Psychology and Improvisation at Edinburgh University and lectures, publishes and runs workshops internationally.

JK: What took you into the world of improvisation?
RM: The unique collaborative, creative and social features of improvisation attracted me in an instinctual way long before I understood what I was doing – it just felt good!

JK: What inspires you about improvising?
RM: I think it is the most natural way to communicate – we are all improvisors and we are all musical. Every human being has a biological, social and cultural guarantee of musicianship. This observation has roots in educational and medical practice that date back to ancient Greek civilisation and probably beyond  Neither is this notion a vague utopian ideal, but rather a conclusion drawn by an increasing number of academic researchers involved in investigating the foundations of musical behaviour. The earliest communication between a parent and a child is essentially musical and, more specifically, improvisational. Indeed, to respond emotionally to music may be one defining feature of our humanity. Therefore, music plays an absolutely fundamental communicative role in the earliest and most important relationship that we form in our lives; the relationship with our parents and care-givers. In that sense we are all musical and we all have a musical identity as evidenced at that crucial point in our lives when we were communicating musically and improvising collaboratively with our parents and care-givers.

JK: What projects are you working on at the moment.
RM: A duo CD called parallel moments and a UK tour with Marilyn Crispell in December. I am finishing off a large commission for the BBC to be premiered in 2014

Raymond will be performing and also presenting public lectures:

Alister Spence (piano), Lloyd Swanton (bass), Toby Hall (drums) Raymond MacDonald (alto/soprano sax) After releasing a debut duo album in 2012 and touring as a quartet in U.K. in February 2013 Alister and Raymond re-unite for a short Australian tour.
'Clearly the planets were in the right conjunction in the celestial sphere and prompted some inspired music making' Jazzwise (UK) 8:30pm $25/$20/$15

For more info visit these websites.