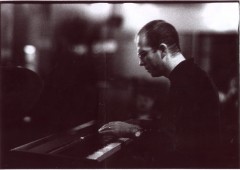 Russell Holmes piano Russell is a highly credited jazz pianist, most recently receiving a WAMI award (his third) for most outstanding jazz group in 2001.

The Russell Holmes Trio performs regularly in Perth, presenting both original compositions and a wealth of classic standards.

Russell has performed at various festivals throughout Australia and recorded with a number of top groups, most notably perhaps the Ragabillys (1993-98). Russell has a degree in Jazz from the WA Conservatorium of Music and currently lectures in piano and theory as a sessional lecturer.

Matt Willis bass Matt holds a Bachelor of Jazz Performance from the WA Conservatorium of Music and his face is seen at many a jazz venue around Perth. Matt performed with the West Australian Youth Jazz Orchestra at the 2000 Sydney Olympic Games and his contribution to this orchestra saw him awarded the 2000 Australia Arts Council Fellowship Scholarship. A seasoned performer, Matt has participated in the Melbourne International Jazz Festival and the 2002 Fremantle International Jazz Festival. His career highlights include performing alongside such musical luminaries as Randy Brecker, Billy Cobham, Frank Foster, James Morrison, Mark Levine, Don Burrows, Mimi Foz and Daryl Somers.

Matt Styles sax Performer, teacher, arranger and musical director describe some of the roles this versatile musician plays. During his graduate days at the University of Western of Australia, Matthew was able to study flute, saxophone, education, orchestration and arranging, classical and jazz music. This enabled him to teach and perform in many styles of music both here and abroad. After a 3 years studying and performing in London, Europe and the United States, Matthew returned to Perth where he is currently completing his Master’s in Saxophone. Matthew is now Lecturer in advanced saxophone, aural perception, jazz education, teaching studies and music technology at the University of Western Australia.

Rod Vervest guitar Raised on a diet of early blues, swing & jazz, Rod’s guitar playing career now spans almost 30 years. As a member of the popular swing quartet, the Ragabilly’s, Rod released 2 albums, Accolades include: most outstanding guitarist, Bridgetown Blues Festival (1995 & 1996). Rod’s current band, The Sultans, combines some of the country’s leading acoustic musicians and has performed at festivals throughout Australia. Rod currently lectures at the TAFE college in Denmark, tutors guitar at St. Joseph’s College (Albany), is artist in residence at the Vancouver Arts Centre and Artistic Director of Albany’s Harboursound Festival.

Michael Perkins drums Michael completed the Certificate of Music (Jazz) in 1997 and went on to attain a Bachelor of Music (Jazz) in 2001. He has toured nationally with the Australian Army Band, supporting such well known artists as Barry Crocker, Andrew Foote and Judith Durham. Career highlights include being invited to perform with jazz legend Don Burrows. Michael currently teaches at various schools in Perth and performs regularly.