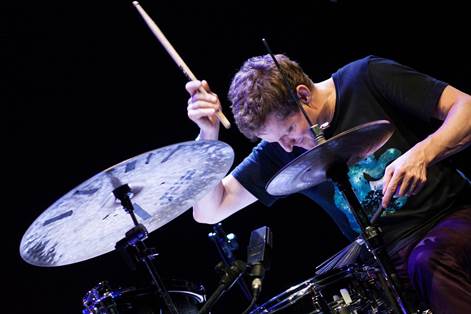 “It is with a great feeling of excitement that Simon Barker and I have been able to put together a program that features Australian artists at its core. ”

David Theak, head of the jazz program at the University’s Conservatorium of Music said:

“We have gathered the best of the best from around the country to perform alongside our international guests. It will be a rare treat for Sydney audiences to hear Blue Note recording artist Greg Osby alongside prodigious Miami-based Tal Cohen and Perth heavy-weight Jamie Oehlers, Adelaide’s luminary guitarist James Muller with potent British saxophonist Will Vinson followed by a new quintet by Sydney’s profusely creative trumpeter Phil Slater – playing back to back – across one epic day.”

The University of Sydney’s Conservatorium of Music, is hosting an inaugural international jazz festival on Sunday 4 June. Part of the Con’s new music program for Vivid Sydney, will feature more than 100 musicians in 26 events across five venues.

Headlining the festival on his first visit to Australia is prolific Amenian pianist Tigran Hamasyan. Tigran, who has won a swag of awards including top prizes at the Montreux and North Sea Jazz Festivals, is shining a light on contemporary piano with his ability to seamlessly blend jazz, folk, progressive rock and classical forms. His soulful approach, owing largely to his Armenian roots and undisputable technical skills, will be on display in a special solo performance of his new release An Ancient Observer which is available now on Nonesuch Records.

The revolutionary American drummer Jim Black, who has a reputation of taking the listener to places rarely travelled, will together at the Sydney Opera House in 2005, when their performance was described by The Sydney Morning Herald as having “boundless imagination”. For this performance, the pair will be joined by celebrated Melbourne artists, bassist Christopher Hale and tenor saxophonist Julien Wilson.

Theak, who is a tireless advocate for large jazz ensembles and education in Australia, added: “Central to the festival program is not just the performance of the music, but the educational elements. We will draw on an impressive calibre of artists in our masterclass program to unlock the mystery of jazz and help audiences to gain an insight into how the music in constructed.”

In support of their mission, Theak and Barker have devised a mentoring program that sees Conservatorium students work with esteemed leaders of the Australian jazz scene, such as saxophonist and composer Sandy Evans. Students will rehearse and perform with their mentors during the festival.