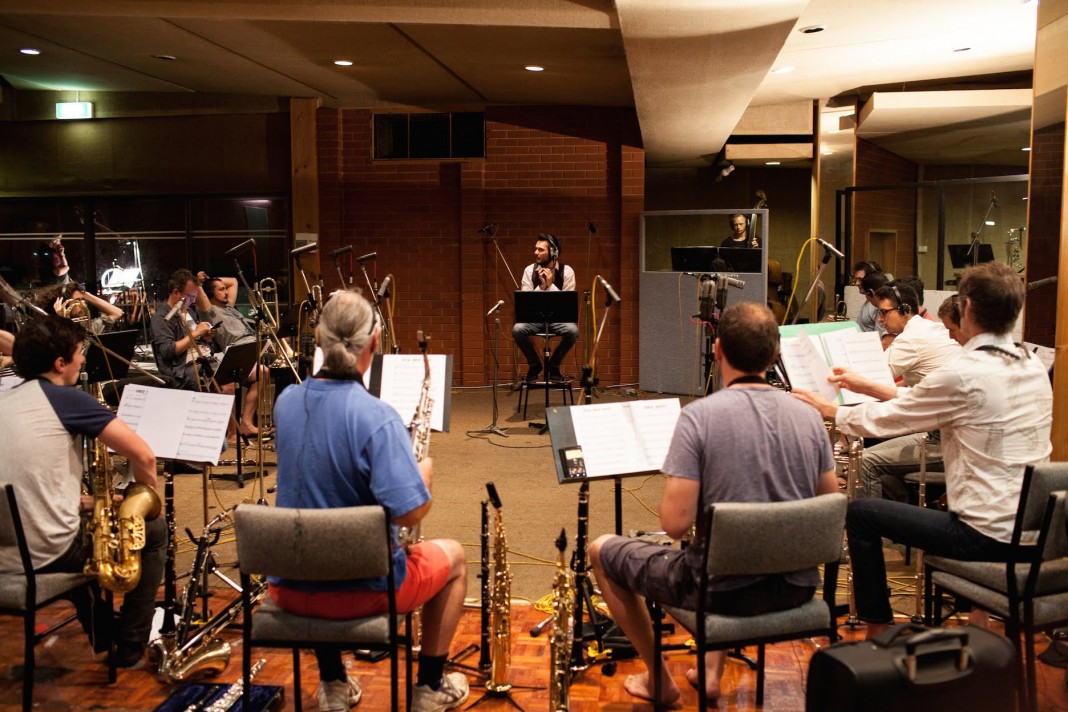 If you trace the history and development of jazz bands, the early formats of these ensembles included three trumpets, two trombone plus four saxophones and rhythm section. Dance bands grew in the 1920s and 1930s to include 3 saxes, 2 trumpets and one trombone. Soon it was 3 trumpets, 2 trombones, and four saxes. In 1938 Artie Shaw added a third trombone to his band, and had three trumpets and three trombones. Other bands started to add a fourth trumpet and fourth trombone. Eventually a couple of bands went to four trumpets, four trombones, and five saxes, which has become the standard ever since and commonly known as the big band.

A quick glance at the liner notes to Last Sanctuary shows that James Mustafa has used this line up as the core of his jazz orchestra, but goes well beyond the realms of the standard big band format to include bass clarinet, contrabass clarinet, descant record, tin whistle, oboe, piccolo and alto flute are all instruments on which the woodwind section, double, triple and quadruple on. Jazz orchestra is indeed an apt term for this ensemble.

Mustafa, a founding member of the Melbourne Jazz Composers Orchestra has been instrumental in getting the works of young jazz composers performed, a sometimes difficult thing to have done in this country. In 2013 he launched his own big band, The James Mustafa Jazz Orchestra, the culmination of which you can hear on this recording. Assembled here are some of Melbourne’s and indeed Australia’s, finest jazz musicians and session players, all bringing to the fore their musical knowledge, improvisation skills and personalities.

Hints of Mustafa’s heroes can be heard in the compositions, from the Maria Schneider-esque Paper Boats. Opening with a repeated bass note and woodwind chords, this piece works on the premise of overlapping ideas, generally presented in sectional (i.e. woodwind, brass, rhythm). Mustafa’s understanding of classical music is evident here as he unfolds each musical idea and overlaps them. Mustafa places the melody in the lowest depths of the orchestra with Eric Budd on the tuba. While this might seem an unusual place to put the melody, it is a very effective colour to the composition and gives the piece a solid grounding amidst the lighter textures.

Soul Dust has an Irish-esque air about it and there are moments when a certain feeling of dancing appears. The pieces unfolds and Lachlan Davidson’s tenor saxophone soloing on this track is a stand out. Rich in texture and colour, Davidson weaves in and out of the material that Mustafa has initially presented and creates links between sections of the tracks. Towards the end of the track the tin whistle makes an appearance, interjecting with a descending figure, perhaps reaffirming the Irish-esque overtone of the piece. The piece lifts and lilts as the brass create a rhythmic drive that pushes it along, before finishing with some tutti chords.

The title track Last Sanctuary delves into a far reaching pallet of colours and musical styles. Some parts  film music soundtrack, some parts classical composition, this piece is a stand out composition. The track starts with a an ambient guitar introduction, played by Jack Pantazias. A haunting melody floats over a free feeling section and the addition of chimes add a crisp feel to the piece. The addition of vocals (in the form of Gian Slater) add an extra tone colour to the track. This piece is a study in orchestration and delves into a wide range of musical materials weaving in out of different shades of texture over the extended form of the piece.

Season’s Place opens with a gentle piano solo before the unusual valve trombone (possibly most well known in jazz because of the late Bob Brookmeyer) enters restating the melody just heard in the piano. This track includes the oboe, alto clarinet and bass flugelhorn, adding a variety of fresh textures giving the piece a rich orchestral feel. Mustafa offsets the colour of the valve trombone (played by Jordan Murray) with flutes and the bass clarinet creating a delicious texture, sprinkled with sizzles from the drum kit. Jordan Murray’s valve trombone solo glides seamlessly over the spares backing of the piano, drums and bass.

Amber Moment provides a change in mood. The piano introduces this piece with lush jazz chords focusing on the velvety textures in the mid register of the instrument. This is a stripped back piece that goes from moments of quiet reflection to moments of elation. Paul Williamson’s trumpet playing is well suited to this track and his solos generate lyrical material that float effortlessly on top of the ensembles. His sustained notes played amongst moving ensemble chords are most effective. The piece finishes where it ends, with the piano (with the addition of Williamson’s trumpet) returning to the mellow vibe, where the piece began.

Rush Hour, demonstrates Mustafa’s ability to composer a hard hitting swing tune. Reminiscent of the music of Thad Jones with colourings of Bob Brookmeyer and Count Basie, this swing driven piece is a stand out on the album. A highlight of this track is the clear cut big band swing style writing juxtaposed with the chaotic tenor saxophone and trumpet solos by Tony Hicks and Ben Harrison, respectively. A clever musical paraphrase is heard at the end of the piece, from Glenn Millers String of Pearls , an acknowledgement from Mustafa about where big band music has come from and where it is now.

James Mustafa is a composer who knows how to create colour with an extended pallet and still remain within the stylistic parameters of jazz orchestra writing. The orchestral colours he achieves with the extended woodwind doublings are a key feature of the album. The tin whistle even gets an appearance- I think this might be the first time in the history of large jazz ensemble writing that it has made an appearance. All of this demonstrates that Mustafa is a composer and arranger who knows his craft well and certainly knows where he comes from in a long line of big band tradition and is not afraid to acknowledge his influences. He demonstrates that he truly knows about jazz music as something being from the past and from the present at the same time. A stand out debut album from an emerging voice in jazz composition.