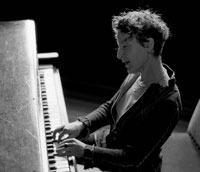 JK:    What has attracted you to contemporary music and why do you think you have been described as a visionary?

MM: I guess it goes back to being a little girl. When I first started playing piano I would just sit down and start improvising.  While I studied classical music as a girl, I had a teacher who exposed me to a lot of great 20th century composers and one of my favourites growing up was Béla Bartók
and so I think there has always been a part of me that loves to hear of things that I haven’t heard before.  Things that are fresh.  It might be that I had the same experience with very early motets or medieval music and so it doesn’t have to be contemporary to sound different and fresh to my ears, but I am just somehow always really taken with that and I think that the people that are most inspiring to me were really visionary.  They had their own voices and had the courage to put it out there and really not compromise like Cecile Taylor and Ornette Coleman and countless, countless others.

I don’t necessarily look at myself as a visionary but I have always put finding my own voice and then sharing that above anything else in my music, so it’s nice to hear that.

JK: Did have to decide that you wanted to be a full time performer?

MM: You know I have to admit when I was younger, just out of college, I didn’t think much about making music a career, at the same time I didn’t consider any other career.  I just kept following the music and eventually found that I could make a life out of it.

But I’ve always taught to one degree or another – private lessons or I taught a prep school in New York for many years.  I got this position at UC Berkeley, so teaching has always been a part of it, but I’ve always been teaching what I do, so you know there’s a nice synergy there.

JK: What inspires you to play new music.

MM: Well, lots of different things, but I would say a primary source of inspiration for me, other than musicians who inspire me are other kinds of artwork, it might be architecture or a painting or a particular artists’ drawings or some literature, poetry or prose that either the imagery or the rhythm of the work inspires me.   So, a lot of my work has been based on or inspired by those type of things.

JK: When you do compose do you have a routine?

MM: Yes and no.  I have a sort of a set of guidelines that I learnt very many years ago from Henry Threadgill.  He taught me his approach to composing and I have just adapted some of those ideas for myself and often I’ll take, it might be mmmmm, it could come from a lot of different things.  It could be looking at a way of responding sonically to art in another medium and then often it will start with a gesture or a phrase or a small bit of music, musical materials that I then develop in a lot of different ways or create a lot of different permutations of and then I go back and play all of those and start to piece, a piece of music together.

JK: You mentioned that you also look at different sounds that can come from the piano, how do you play around with that?

MM: Well it depends, I am just now working on a solo piano set of music to record which I’ve never done before. Typically I write for other musicians and ensembles and that’s a different process, but when I’ve been writing for myself it’s this sort of back and forth between how I like to play and sort of doing a bunch of free explorations or sonic explorations.

This set of pieces is based on or related to a series of drawings by a friend of mine.  So I am kind of looking at the drawings, responding to them sonically or through a physical musical gesture and then playing back and forth between that and how I like to play, and then actually developing and writing material along the lines of how I described before.  So it’s this kind of back and forth dialogue between the actual playing and the reflecting on the artwork and how I put it all together.

JK: Do you split your time evenly between playing and composing?

MM: I am not very good at keeping all these things on a disciplined schedule anymore.  Between being a full time professor and trying to keep my career going and having to do a lot of the business myself its very hard for me to have a daily routine.  So there will be times when I am more focussed on my performance and practising and other times when I am more focussed on composing and it’s during my breaks from teaching that I can really focus on both which is what I prefer to do.

JK: It must be hard because when you do the teaching it is a totally different mindset.

MM: Yes it really is and yes I have to show up and do that.  The great thing is that I teach what I do so I can get inspired.  I’ll get an idea about what to do from my students based on something I am working on in my own creative process.

But at the same time I have to show up, I have to be there at the right time, I have to be available to them and there are times when I have to put that before working on my own music.  It’s really in the breaks that I can do it all.

JK: Where were you when you first heard your favourite performer playing live?

MM: Well I don’t know that I have a favourite performer. There have been many people over the years who inspired me at different times.  I mean, when I was a little girl my first piano teacher who was teaching me classical music was and is a great boogie woogie blues player in the Chicago tradition.  I used to go down to a folk festival at the University of Chicago where he and other great musicians were performing.  I first heard that when I was, I don’t know, 8, 9, 10 years old? I heard Otis Spann, Jimmy Walker.  These influences were huge and I was quite young then.  And then I guess, the next really big thing was hearing Leroy Jenkins play when I was in College and that really opened me up to this whole world of improvisational creative music. That was a big turning point and then I went on.

In New York I heard a lot of great players.  When I moved to New York I got a chance to work with a lot of people who were either my mentors or direct teachers or people I’d just been hearing about forever.  If not play with them I got to meet Cecile Taylor and spend time with him backstage at concerts and you know stuff like that that is really priceless.

MM: I think it’s the energy exchange.  It’s the immediacy of the energy.  Whether I am playing with Trio M or solo, whether its between me and the piano, there’s something about having a live audience that’s this other energy that feeds the music and then there’s a real sense of give and take.  I don’t know you know its hard to put into words, but that’s what, being able to share and being able to share is something important to me and something I feel very deeply. Its just that its very fulfilling.

JK: what other projects you are working on at the moment?

MM: Well I mentioned my solo project which I am going to record this winter and then I have a new quintet called Snowy Egret, that involves Stomu Takeishi – bass guitar, Liberty Ellman – guitar, Ron Miles – trumpet, Tyshawn Sorey – drums and myself on piano, melodica, sampler, inside piano.

I wrote a set of music recently that was based on the writing of an Uruguayan writer named Eduardo Galeano and this is the band playing that music.  I am starting to write more music for them now.  It’s a great new quintet.  We have only done two concerts but I am totally in love with it and we have some more concerts coming up in the Spring and I am hoping to get a recording deal for them.

JK: When you go to Sydney you will be performing in the Sydney International Women’s Jazz Festival.  Do you have any thoughts about being female in a jazz world?

MM: Now there’s all kinds of females improvising in jazz which is great.  Well you know, I mean I am encouraged by the players there are now and really greatful that I was able to work in what was a very male dominated kind of community and for the most part always felt welcomed.

And I am aware of some prejudices and things people have said over the years but by and large my mentors and my colleagues, audiences and presenters have made me feel very welcomed into this world.

I hope that continues and I think the fact that there are so many younger women players now is an affirmation that we are moving a bit more in that direction.

Trio M are on national tour and perform this Friday at the Sydney International Women’s Jazz festival.  For more information visit www.sima.org.au

Pianist, composer and bandleader Myra Melford is the winner of the 2012 Alpert Award in the Arts for Music, an esteemed veteran of the international creative music community, and an Associate Professor of contemporary improvised music at the University of California, Berkeley. Critics have called her “a crafty original whose playing is filled with muscle, brains and poetic spark” (Time Out New York), “a very accomplished composer…definitely a voice of her own” (Jez Nelson, BBC 3’s Jazz on 3) and “a visionary bandleader with a singularly expansive sound embracing a global array of influences” (Andrew Gilbert, Berkeleyside).

In addition to her musical studies with such notable figures as Ran Blake, Don Pullen and Henry Threadgill, as well as masters of indigenous styles from around the world, her constant¬ly evolving, highly personal approach incorporates such idiosyn¬cratic and wide-ranging elements as the “organic architecture” philosophy of Frank Lloyd Wright, the Eastern spirituality of akido and Zen Buddhism, the imagery and metaphor of poets from Rumi to Muhammad Al-Jawahiri, the style and subject matter of such authors as James Joyce and Eduardo Galeano, and the colorful artwork of the late Sacramento-based artist Don Reich.

“I draw great inspiration from other people’s creative work and am intrigued by the ensuing cross-disciplinary dialogue,” she explains in a recent interview. “I think of it as a very personal conversation that begins with a spark of recognition when I experience a given work of art, be it in any medium. Something in that building, the imagery or rhythm in that poem, that dancer’s gestures or that painting, speaks to me or moves me, and I want to respond through music. The conversation is both internal—between the active/doer and the receptive/perceiver within me, and external—between the artwork that inspires and the musical response. It’s a very rich and engaging process on many levels: emotional, intellectual, physical, spiritual, and one I return to again and again in my work.”