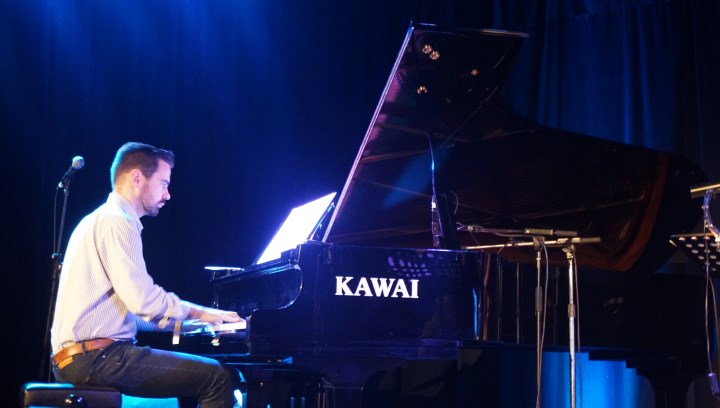 Over the past few years catastrophes major and minor, some involving death, have plagued me almost daily until I fear I am becoming superstitious. Enough of that. The notes and almost completed essays – written by me in the dark and therefore illegible to anyone else – have been lost in very strange circumstances. There is no time to track down much information contained therein (I’m sure Jessica Nichol’s review of Wangaratta in The Age will have a lot of information: look there) so I will have to make do with some impressions and now jumbling memories of some exceptional events witnessed and heard at Wangaratta this year.

The first event was Paul Grabowsky’s remarkable and surprisingly successful (indeed devastating) combination, or fusion if you like, of Aboriginal song with didgeridoo and clapping sticks rhythms, with a large jazz ensemble – The Monash Art Orchestra. Some of the jazz players were Monash students, some (Grabowsky for instance) teach there.

I am sure that nothing topped this, if indeed there was anything that quite compared. First the singing. I grew up with Aborigines at school, one was a close friend) and nearby La Perouse (they had been brought up from a hundred miles down the coast years ago), but they were much further removed from their ancient culture than Grabowsky’s two exponents. I have heard Aboriginal playing on record and in a documentary, but nothing had prepared me for the sudden staccato outburst – so loud and shattering. After the initial shock it became obvious that this was actually controlled immaculately. One knew that the digeridoo would be (it is in fact a wind -propelled drum) and the far more minimal bright beat of the singer’s sticks, but the singer’s volume was moved through precise gradations, as was his actual sound as he moved through different registers. At first the ensemble rose in a dark wall of sound punctured by wild keening and screaming clarinet and saxophones and extended from below by rumbling winds (which winds? I heard it all at once: probably trombones, tuba.) The influence of the “free jazz” or avant garde period was also there, equally pertinent.

Later, brilliantly distorted, indeed rubberised, massive ensemble riffs and melodic figures – I mean swinging, driving figures! –  that recalled certain jazz bands of the late 1940s and 1950s which incorporated screaming brass sections and overall frightening volume These sometimes enfolded the singer and didgeridoo player (who both knew exactly where to come in or drop out and seemed to enjoy it a great deal), until a terrific climax was reached and immediately halted and all was silence. Then the singer, David Yipininy Wilfred, started singing, so quietly that he seemed to have gone into another room or walked some way into a desert before turning and sending these intricate and strange melodic utterances. I talked with Paul Grabowsky later and he said that when he sang that quietly he was singing to his dead grandfather.

The didgeridoo player Daniel Ngukurr Boy Wilfred and David Yipininy Wilfred are brothers not by tribe or clan, but by blood. Some mentioned the “chaotic moments”, which to me seemed not chaotic at all. Every aural space in these vivid mosaics was filled with some pulsation, with coughing, barks, splutters, screams, all exactly tuned to its space. There was a standing ovation I noted. Before noting that I was standing myself.

Later I heard energy of a very different kind created by the Andrea Keller Quartet. Keller, the pianist and main composer created a mood of meditative quiet that was also very emotional. This was achieved in part by setting everything at slow or medium tempo. This rhythmic/melodic platform seemed to magnify every nuance above. Tamara Murphy was the bassist I think I remember. Eugene ball’s trumpet was particularly affecting, whether he was intoning in a broad and ringing tone or breaking into intricate and delicate runs in a bright and knife-edged tone. 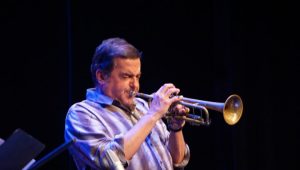 also heard, rendered by Warwick Alder in Celebrating  Bernie McGann, which was a small ensemble suite written by Sandy Evans – a celebration of course, of the late and very great alto player. Beginning in smooth serenity the band reached McGann energy levels later. In fact they were raging, to use some ancient parlance. Between Alder and Evans stood alto player Andrew Robson, who was in luminous and searing form. Sandy played tenor saxophone, perhaps as well as I’ve ever heard her. Earlier I had heard her playing soprano saxophone beautifully with her Indian quartet with colleagues Bobby Singh (tabla), bassist Brett Hirst and drummer Toby Hall.

Yet more great trumpet was given us by Scott Tinkler when he joined pianist Joseph O’Connor’s ensemble. This was very bracing stuff in the morning, influenced somewhat by certain twelve tone composers. Perhaps Anton Webern. Perhaps Boulez. O’Connor mentioned a more recent exponent I had not then heard of. A piece played at considerable speed, developing a momentum that made the audience roar, was a complex of jostling notes with startling clanging and banging punctuations. The piano and drums sounded beautiful when they struck simultaneously. Drum rims and treble piano notes. The drummer was James McLean, the bassist Marty Hollenbeck. O’Connor had written some wide interval slow sections for Tinkler on another piece. Massive low notes skipped with no warning up to long shimmering screams. Of course Scott’s speed in complex patterns came into play. With Tinkler this never sounds like showing off. It is an expressive element employed as such.

Brilliant, funny and as they say amazing sets were played by Barney McAll (solo in the noble sandstone Anglican cathedral and with a large ensemble in the Wangaratta Performing Arts Centre. Guitarist Steve Magnussen and saxophonist Julien Wilson were particularly empathetic while contrasting radically with each other. Between his utterly astounding grand piano playing McAll made hilarious announcements through an electronic set up which converted his voice into a stack or reverberant simulacra.

PS After searching frantically under seats for my notes when I arrived at central Station I went home and later rang Lost Property. Then I went back and asked two guards who displayed a certain amount of hostility. They had looked through the train and found nothing. But next day I got a phone call telling me it had been found. Yes! Yes! Except that the relevant pages had been torn out and thrown I know not where. The only related notes were a few descriptions of passing landscapes on the way. Some of that was all right – including a description of a field of pale green elegant willows – so that was compensation of a kind. The lost keys to my Sydney flat had turned up in the most unexpected place. I had somewhere to sleep. But like Bob Dylan I am going back to New York City – I really do believe I’ve had enough.