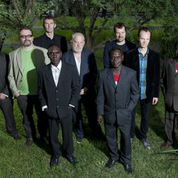 “This is music that sounds as if it’s growing and evolving out of the earth. Though much of this music is arranged… it sounds truly spontaneous, free and improvised.    Crossing Roper Bar Volume 1, The NYC Jazz Record

On the eve of their second CD launch we do a quick interview with Daniel Wilfred. The Wägilak people speak English as a second language, so we were lucky to catch Daniel on the run between gigs.

JK: What significance does this project have for you?

JK: What are the similarities and differences between your traditional music and jazz?

JK: What inspires you about the project?

DW: I am inspired by wild blackfellas, the wind blowing, the importance of using the wind for smoking, singing is the way we start our ceremonies – that’s why it is important

JK: Any ideas for the future?

DW: Changing around what I sing, sometimes dreamtime songs come up when I sing. All my life I’ve been working with the Art Orchestra, playing with Paul and the Art Orchestra – this is my main outside project

“…one of the most original concerts in the 2012 London Jazz Festival programme.  The musical union is inspired. ”  Jazzwise Magazine, UK

Crossing Roper Bar is a visionary exploration of jazz and the music traditions of Australia’s first people.  Through a series of regular exchanges that began nine years ago in 2005, Crossing Roper Bar brings together two diverse cultures in a very contemporary and yet spiritual musical fusion.

The launch event marks only the second time that the collaborators have performed in Melbourne – the first in 2007 – and follows critically acclaimed appearances at the London Jazz Festival, the Musee du Quai Branly in Paris and Cambridge University.

Based on the Yolngu song cycle Wild Blackfella, the launch performance will give Melburnians a chance to experience the power of this music in the intimate surrounds of Bennetts Lane.

Audiences interested in gaining a deeper insight into the Crossing Roper Bar experience can attend a one-off workshop with Daniel and David Wilfred where they will learn about the storytelling, ceremony and musical traditions of Arnhem Land, take part in bunggul (dance) workshops, and enjoy live performance of beautiful songs and virtuoso yidaki (didjeridu) playing.

The manikay (song cycles) of the Yolŋu of South East Arnhem Land represent one of the oldest and most affecting musical traditions on the planet and the song men of Ngukurr have worked closely with the AAO to create a contemporary rendering of these precious cultural artefacts – performing songs that many of their Yolŋu kin further north had thought were lost forever.

Paul Grabowsky, who initiated the project, said the collaboration is based on an equal exchange of knowledge through a dialogue centred on music. The resulting intersection of jazz and traditional Indigenous music is an electrifying marriage of the very old with the very new, and a celebration of country, ceremony, and the power of music to build enduring bridges across cultures, time and space.

“Music is integral to Aboriginal ceremony, culture and to their whole social system and the ancient song cycles of the Manikay are in real danger of being lost unless they are picked up and preserved by future generations” said Grabowsky.

“Over the past 9 years the Crossing Roper Bar project has reinvigorated the Ngukkur community, which has for many decades lived with the threat of losing its cultural traditions. It has re-engaged the young people and shown a way forward.”

The Roper River is a magnificent waterway flowing from Mataranka, 100 kms south of Katherine, and out across the land of the Mangarayi and Yungman people. Before it reaches the Gulf of Carpentaria it passes the remote town of Ngukurr, which is isolated by the Wet for several months of each year (November to Easter) when the Roper engulfs all but the highest land. At other times, Roper Bar is the point where it’s possible to cross the river and go on to Ngukurr. The crossing over seems not only a poetic but also a fitting metaphor for our collaboration, Crossing Roper Bar.

·         Learn about Manikay, one of the great classical music traditions indigenous to Arnhem Land including live demonstrations

·         Discover the poetic, philosophic and religious aspects of music and ceremony in Arnhem Land and the integral links between music, the land and ceremonial law