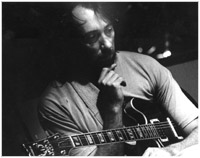 Sydney-based guitarist Jeremy Sawkins, formed an organ trio in 2004 with drummer Dave Goodman and organist Darren Heinrich, who appears here in the quartet. Sawkins moved to Ireland later that year, remaining in Dublin for two years to play with many top musicians and teaching at the Newpark Music Centre.

Returning to Sydney in 2006 the guitarist reunited with organist Heinrich, and has since added saxophonist Spike Mason and Toby Hall on drums for this all-Sydney group.

Opening with Mason’s Blues for Sera, the organ provides a calming atmosphere at first and gradually builds the blues format behind the alto sax solo to introduce Sawkins’s solo before Heinrich’s Hammond climbs into a swinging Lonnie Smith-style passage leading to the re-statement conclusion.

An unexpected selection is the traditional piece She Moved Through the Fair, beginning with an out-of-tempo organ and guitar sound-wash, soon joined by the sax, before the guitar wanders abstractedly.
Funny Farm is a Sawkins post-bop original led by unison guitar and sax ahead of the guitar taking off before providing chordal stabs under the sax solo; while Heinrich’s composition Hello, Goodbye slows the tempo for a ballad-like number with a laid-back sax exploration.

Mason’s second contribution, Tobes Malone features a ‘tock tock’ rhythm behind a quite interesting theme to which organ, alto and guitar all add solos.

This is a collection of well-played music by competent musicians that makes for pleasant enough listening, even though the overall result sometimes seems to suffer from a certain lack of focus.