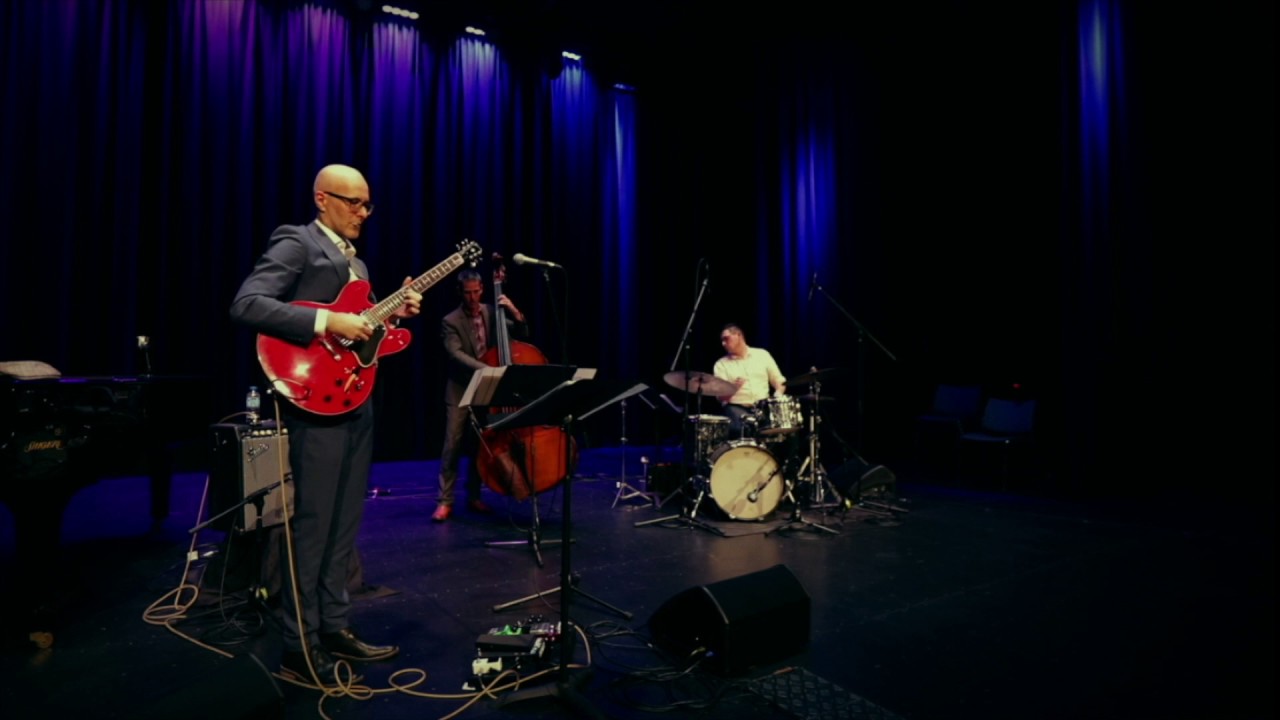 The cover illustration of Queensland guitarist/composer Toby Wren’s new trio album Black Mountain at first seems an incongruous choice. An epic 1760 painting (de Louthenbourg’s ‘A Shipwreck off a Rocky Coast’)¬, its mannered classicism seems at odds with the angular modernism of the music within.

But it is not the subject, nor the treatment, of this painting that fits; it is the colour palette. Wren’s compositions are rendered in these olives, aubergines and purple-blacks, with shots of mustard and saffron – and even a window of lilac/sky-blue here and there.

His trio ¬– Wren together with bassist Andrew Shaw and Chris Vale on ‘drum set’ ¬– render all the complex colours of these unique compositions beautifully, considering the limited instrumental palette.

Wren uses little on his guitar bar some mild dirt and amp colours. The tough ‘Bedroom for Improvement’ reminds of Larry Coryell’s musclular trio albums from a few years back, with their distortion and backbeat.

But in the main, Black Mountain brings up fond recollections of the great Abercrombie/Holland/DeJohnnette 1975 album Gateway. Which is not to say it is not its own animal; the good vibes between the players, the sense of adventure, the push/pull between soloist and ground is what brought the comparison to mind.
Wren’s collection, though, has the added dimension of post-rock ¬– something unthought of in ’75. ‘An Unbearable Weight’s recipe of flowing/floating arpeggios (with flashes of silvery harmonics), bowed bass and skittering drums takes Black Mountain out of the jazz ballpark. Just as with ‘Sevens’ and its sister piece ‘Sixes’ – both creating shimmering rhythmic lattices of the titular time-signatures which, as the pieces evolve, work against and within that rhythm.

Wren’s guitar approach – just like his compositions – draws on jazz, rock (pre- and post-), blues and anything else that his mill needs to grist (he is a student of the Carnatic music of India; check the multituplet clusters in ‘Guitargam’). There is the rolling blues of opener ‘An Epic Rock’; the pleasingly plump be-bop of ‘Black Mountain Resolve’ (and the minimal 34 second solo guitar haiku of its sister, the title track ‘Black Mountain’); the unhinged guitar solo of ‘Sirens’; and the lovely lullaby of album closer ‘Sentimental Old Thing’.

Black Mountain is a unique and rewarding listen; all the more for its sparseness of means: the invention demanded by, and apt interpretation of these pieces would test any group, but Wren and his men seem never to be anything but entirely at ease here.
Take a listen. It is great music – whatever its colour.