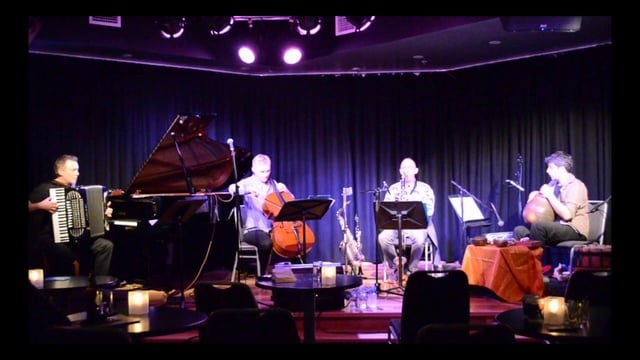 Watching Gary Daley’s astounding Bungarribee quartet you realise it is actually the classic jazz saxophone quartet lineup – but a number of times removed: the sax is Paul Cutlan’s bass clarinet, the piano now Daley’s accordian, the bass replaced by the cello of Oliver Miller and the drum kit by hand-drums, talking drums, bells and anything else Tunji Beier can lay his amazing hands on.

The music, equally, is located somewhere to the north-east of jazz but definitely south-south-west of European art music. The quartet grew out of Daley’s larger ‘Sanctuary’ project, yet retains that ensemble’s unique breadth of vision, and intricate interweaving of composed and improv elements.

Marrickville’s cosy and velvet draped Django Bar was treated to Bungarribee last Thursday. Maybe it was the coziness, maybe it was the large pinot shouted me by good friend Dave Delilah, but for their all-too-short set I was there, miles away, north-east of jazz, south-south-west of Europe, basking in that colourful tropic that Bungarribee make their own.

As well as the unique instrumentation, subtle electronic loops weave in and out of the music, adding yet another layer of exoticism. Such a loop opened Daley’s ‘Bungarribee Road’, unannounced and slowly quieting the room conversation as it grew into melody and some funky Cutlan and Daley solos.

Ligeti was next. The master’s ‘Musica Ricercata No 7’ opened with a bass clarinet loop from Paul Cutlan. Cutlan was in his patented mystic zone; the music had the room levitating. We found ourselves also in Fat’s ‘Jitterbug Waltz’ – Daley’s accordion duetting the ecstatic jaunt of that melody and playing around with every syllable of it in their improvs.

Oliver Miller’s ‘Somewhere’ was based on a fragment of ‘Over The Rainbow’; maybe a more indigo part of the spectrum, shot through with the startling yellows and reds of shrieks and moans of Miller’s cello and Cutlan’s alto (then down to almost silence of the padding clacking of the alto’s keys).

An untitled African tune inspired by Daley’s viewing of a YouTube clip featured Beier on talking drum – big 6/8 fun (and all it’s variations, and huge effervescence from the band).

Daley announced there was “so much more music to play” but only time for one more – we were as sad as he was. Gladly he picked his own piece ‘Hunger’ which, he explained, is about the drive, the hunger, to make Art. A driving and sinous 7/8 groove and melody, ‘Hunger’ left us and the band giddy and a little spent.

I, and I am sure the rest of the lucky Django audience, floated home. Bungarribee – Daley, Cutlan, Miller and Beier – had taken us somewhere over their own rainbow. I, for one, cannot wait to go back.