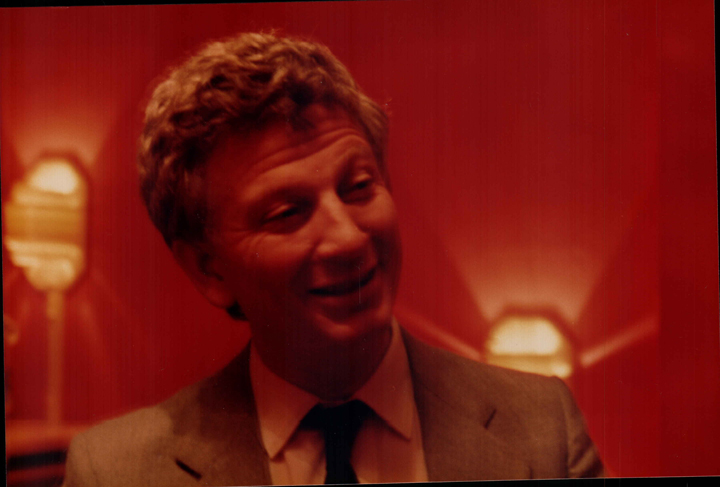 At the Kvadrant I was approached by a broadcaster and entrepreneur from Estonia, Mati Brauer, who asked about the possibility of Australian groups coming to Estonia. As the Sydney group Clarion Fracture Zone (CFZ) had received an Australia Council grant, and was in the process of setting up a European tour, I posed the possibility of their coming in mid-1990, and he seemed very interested. I promised to supply him with a tape. (It was this contact which led to the two-weeks tour of the Soviet Union by CFZ in mid-1990, which they sandwiched between their other European performances, with Australia Council and Dept of Foreign Affairs support).

As Richie Cole had left unexpectedly, his spot on the grand finale concert of the Leningrad festival had to be filled. The festival organisers asked Roger Frampton to perform on saxophones with the four Soviet musicians who had been touring with Cole: Andrey Kondakov (piano), Vitaly Solomonov (bass), Oleg Butman (drums), and Andrey Ryabov(guitar). This was a fine performance of 45 minutes, made a little difficult by the inexperience of the Russians, and their inability to understand certain directives given to them by Roger, who led the group. But, considering there was no rehearsal, it was a creditable performance, and it was marvellous to see Roger closing what had been a very impressive and successful festival, in the company of some of the best jazz musicians in the Soviet Union, before another audience of about 2,000.

On November 20 we travelled on a hired bus to Novgorod, one of the oldest cities in the USSR, where The Engine Room gave a concert at the Novgorod Polytechnic Institute. They were joined by a brilliant l7-year-old Leningrad vibraphonist Alexi Tzyganov, who was said to practice 7-8 hours a day on a xylophone, as he couldn’t afford a set of vibes. Having heard The Engine Room at the Leningrad festival, he had hitched a ride on the bus, hoping to get an opportunity to play with the Australians.

Back in Leningrad the evidence was now accumulating that the Australians had been the hit of the “Autumn Rhythms” festival, and had caused far more interest than any other musicians who had come to the city. This was partly explained by the Australians being in the city for nine days and performing in various places, while most of the other groups came, performed at the festival once only, and left quickly.

We arrived in Petrozavodsk for the Petrozavodsk Jazz Festival “Jazz 89” on November23. The musicians gave their opening concert that night at the Petrozavodsk Culture House, the only performance venue for the festival. Before the concert they were interviewed by Petrozavodsk radio, and filmed by Petrozavodsk television. After their 50-minute set, the musicians were presented with flowers on platters by three small girls in national dress, and drank a special cocktail that had been prepared for them by a local businessman and patron of the arts, Iosif  Semjonovitch.

Semjonovitch turned out to be one of the most interesting people we met in Russia. As a result of glasnost, and the new tolerance of private enterprise, he had established three cafes in Petrozavodsk over the previous year. His cafe at the Culture House was called ‘The Underground’ and, for the festival, a number of artists had contributed paintings as a tribute to jazz musicians. These art works were very handsomely displayed. Also there was an exhibition of black-and-white jazz photographs by a brilliant local photographer in the foyer of the Culture House.

Semjonovitch, who was a bassist in his youth. and then a barman for 15 years before he opened his cafes, had prepared his cocktail – a mixture of fruit juices and sweet wines – to replicate the experience of Duke Ellington, who drank a similar cocktail at the White House when he was celebrated by President Nixon in the early 1970s. Semjonovitch’s cocktail was meant to symbolise the unity of jazz musicians around the world, and he invited the Australians and a number of Russian jazz musicians to drink from the cup simultaneously.

Then the three Australians were presented with an ornately designed silver tray, with the inscription in the centre: ‘To the Engine Room from Petrozavodsk on good memory November 89’.

When I spoke later with Iosif  Semjonovitch, he told me, through an interpreter, that Roger Frampton’s music had “astonished and amused him.” Later, I taped an interview with him, courtesy of our interpreter. “In the music of the Australian trio I saw a beautiful culture,” he said. “It was not only technique, not only the co-ordination of the musicians, not only beautiful music, but culture. We have very good musicians in the Soviet Union, but we do not have this culture – the way the musician lives in the music, the way he understands it. In the trio’s music I saw the great civilisation of jazz.”

On November 25 a review of the opening concert appeared in the Petrozavodsk newspaper Leninskaya Pravda, in which a critic wrote: “The trio from Sydney in which, apart from [Roger] Frampton, have come together the percussion player John Pochée, and the rising star of Australian jazz, the double bass player Steve Elphick, gave an excellent example of ‘jazz glasnost’. Frampton’s own compositions provided open competition for the works of Charlie Parker and George Gershwin.”
On that morning we were picked up for what was described as “a special reception” with Iosif  Semjonovitch. It turned out to be a banquet, held in the back room of Semjonovitch’s main cafe in Petrozavodsk. We were served cold meats, vegetables, bread, hot soup, chicken kiev, schnitzel and fried potatoes, followed by a strawberry wine, fruit & coffee. Meanwhile, a number of toasts were drunk with balsam, a local liqueur-type wine, washed down with fruit juice.

This function was a very moving experience, with a great deal of emotion just under the surface. Thinking back on it even now, I still find it difficult not to weep. Semjonovitch, speaking through an interpreter, said that he had been a jazz fan for 20 years, and would be until his death; he said that jazz was a great philosophy, as well as a music; and he proposed a toast to “musicians of talent in jazz”.

In thanking Semjonovitch for his hospitality, Giorgi Bakhchiev spoke very warmly about the Australian musicians, and the role of the Soviet Jazz Federation in bringing them to the Soviet Union. Roger Frampton spoke on behalf of the Australian party, thanking Semjonovitch for the lunch, the Australian Government for funding the visit, and Giorgi Bakhchiev and Vladimir Feyertag for making our stay such a pleasure. Roger said that the Australians had made many friends while in the Soviet Union, particularly amongst the Russian musicians, and this was a most important aspect of the visit. He proposed a toast to Russian jazz musicians.
Andrey Kondakov responded on behalf of the Soviet musicians, and apologised for the moment in the concert with Roger in Leningrad, when the Russians got lost. This was during the ballad Body & Soul. This enabled Vladimir Feyertag, who has a keen sense of humour, to quip: “Good soul, bad body.”

Part I of this article was published on 29 December. Read here