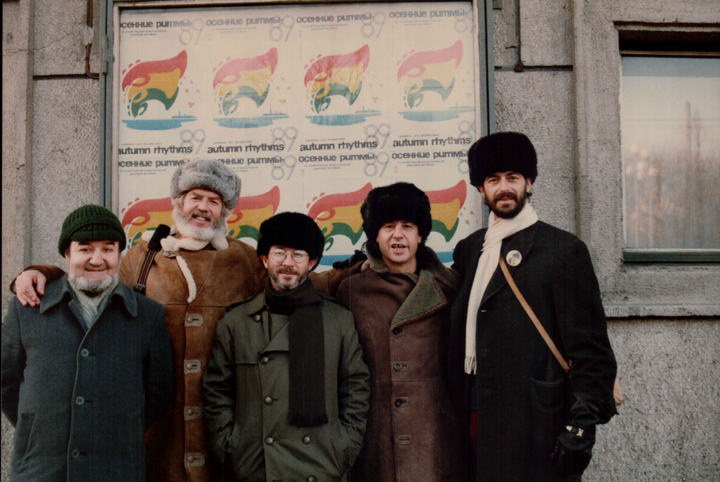 On November 16 the Leningrad International Jazz Festival “Autumn Rhythms” commenced. Roger Frampton was introduced to Sergey Kuryokhin, the young Russian avant-garde musician and composer who had a program devoted to him in the Comrades series, which had been shown on ABC-TV in Australia. Kuryokhin said that he and his ensemble were playing the following night, commencing at 12.30 am, and going on for four hours, until 4.30am. He invited Roger to play with them. Roger was tempted to take up the offer but, as The Engine Room had an early sound-check the next morning – the day of the trio’s main performance at the festival – he had to decline. At our apartment on the night of November 17, however, we saw some of the Kuryokhin performance, as the first hour was broadcast live-to-air on Leningrad television.

The banquets we attended while in Russia were especially memorable. We attended a dinner at the Tet-a-Tet restaurant as guests of the Leningrad International Jazz Festival. We felt it a great honour to be invited. The 30 guests included selected international jazz musicians, the sponsors of the Leningrad Jazz Festival, festival officials from other countries, officials of other jazz festivals in the Soviet Union, and some of the Leningrad Festival staff. I sat at a table for three with Giorgi Bakhchiev and a fascinating man Vladimir Feyertag. I had already met Vladimir, but was able to speak intimately with him for the first time. A writer and music teacher in Leningrad, he was Russia’s Mr Jazz – not only the director and master-of-ceremonies of the Leningrad festival, but also the master-of-ceremonies for many other jazz festivals, and one of the most knowledgeable jazzmen in Russia.

Vladimir said that he remembered well the visit of the Daly-Wilson Big Band to Leningrad in 1975, as big bands were his special interest. Also, he saw John Pochée play with the Bernie McGann Trio at the Warsaw Jazz Jamboree In 1988. At this dinner he gave a couple of short speeches, which were translated into English. The chairman of the restaurant co-operative also gave a speech, in which he hoped that everyone would spend “two beautiful hours” at the restaurant, and dedicated the event to “men of art”. I found the speeches very moving.

The festival program that night was an impressive one, including the German trombonist Conrad Bauer, playing solo; the Rova Saxophone Quartet from the USA; and the Russian percussionist Vladimir Tarasov, performing with the saxophonist Anatoly Vapirov. This was my second opportunity to hear Tarasov, whom I had seen at the Berlin Jazzfest two weeks earlier. A master drummer, he was best-known as the drummer with the distinguished Russian group Ganelin Trio.

The Engine Room’s festival performance on November18, before about 2,000 people, was something of a mixed blessing. The previous band went overtime, which meant that the Australians went on late at 10.20 pm rather than 9.50 as scheduled and, to my ears at least, there were sound problems. As a piano trio, they played In Your Own Sweet Way (Brubeck); Three’s A Breeze (Frampton); and Sunrise Song(Frampton). Then Roger moved to alto saxophone for And Zen Monk (Frampton), and Round Midnight (Thelonious Monk). With Roger back on piano, the trio ended with I Got Rhythm (Gershwin). This 45-minute set had extraordinary impact; the reaction of the audience was splendid. It was the most exciting, committed, and dynamic jazz that I had heard at the festival.

After the performance there was much excitement backstage, with crowds of people wishing to speak to the Australian musicians, and asking for photographs and autographs. Many said that the Australians had been the hit of the festival, even though the American alto saxophonist Richie Cole had played earlier that day. (Cole had left the same day to return to the USA, because of the sudden death of his father.)

After the festival concert we travelled by bus to the Kvadrant jazz club, where an audience of 500 was waiting to hear an international jam session. The Engine Room played for about half-an-hour, before being joined by Daniel Kramer (piano) and Alexander Fisher (trumpet/flugelhorn. Roger moved
to alto saxophone, and a German tenor saxophonist whose name I did not catch, also played. (Kramer and Fisher were the two musicians whom we later invited to tour Australia, and they came in 1990, accompanied by Giorgi Bakhchiev as tour manager).

The whole performance lasted about an hour. The audience – this was the real Leningrad jazz audience, we were told – reacted constantly to the music, calling out and applauding in various spots. We understood that this jam session took place every Saturday night in this venue, going on to the wee small hours. There was a guaranteed audience because certain bridges in Leningrad were closed between 2 and 4 am, and many people couldn’t get home during those two hours.  So, if they were still out at 2, they usually stayed out till 4.

Part I of this article was published on 29 December. Read here