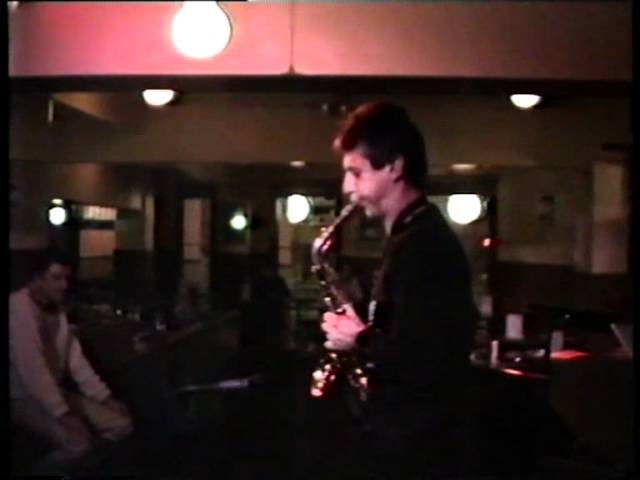 Back in Moscow after Petrozavodsk, the final Moscow concert took place In the Union of Soviet Friendship Societies building, a lovely mansion which was the home of a very rich man before the Russian Revolution in 1917. He had been a supporter of the Bolsheviks but had shot himself after the Revolution, such had been his disappointment with the new order. The concert took place in a very lovely, ornate concert hall, before about 180 people.

Various segments of this performance were filmed for the documentary mentioned above. During the interval Roger Frampton was interviewed by a radio journalist. Then, there was a jam session with various Russian jazz musicians, including the excellent trombonist Vyacheslav Nazarov, of whom we had all formed a high opinion, the drummers Oleg Butman and Stanislav Korosteliov, and the great pianist Leonid Chizhik.

The locals agreed that it was a great honour that Chizhik, described in Keyboard World magazine as “the giant of Soviet jazz piano”, attended, and agreed to perform with the Australians.

Then it was on to Kazan on November 30 for the “Jazz At The Crossroads 1989” Festival. The reputation of the Australian musicians had preceded them. There were many photographers and journalists from the local press. Photos were taken as we walked from the train to the festival bus, and John Pochée was interviewed for an article that appeared on the front page of the Evening Kazan the following day. The Director of the festival, Dr Igor Zisser, took a video of our arrival, and we later discovered that he was working on a documentary on the Australian participation in his festival.

The Engine Room, the American pianist Greg Goodman, and the American saxophone quartet, the Rova Quartet, provided the international components of the festival. (Richie Cole had also been scheduled to appear.) This was the first time that this festival, which had been going for six years, had included jazz musicians from the West, although it had previously included groups from Iron Curtain countries such as East Germany and Poland.

The venue for the “Jazz At The Crossroads 1989” Festival was the Kazan Youth Centre, an all-purpose complex, including hotel, cultural house, concert hall, movie theatre, swimming baths, saunas, etc. Once again The Engine Room played brilliantly; a typically responsive Russian audience reacted to every peak, solo, and nuance in the performance, giving the Australians constant feedback and applause.

The following day, in the Evening Kazan, in a piece which featured three individual photographs of John, Roger and Steve, the critic E Shalman wrote: “The Australian koala subdues the Russian bear. Such titles would be appropriate in the Western press, if there was an intention to describe the performance of the trio Engine Room on the stage of the Youth Centre yesterday evening. The audience at the end of the concert was going wild, and for good reason. The Australian grains fell on well fertilised soil, and jazz of the highest quality sprang up as a result.”

Anatoly Vasilevsky, the bandleader from Kazan, quoted in the same article, said: “Today was great. I was surprised by the group from Nabareznia Chelni, by their firm and mature playing. Shilkoper, it goes without saying, when one person plays like that, when he creates music all on his own, that’s fantastic. Tyurlik, I think, was in his usual role. I didn’t really hear anything new there. But, as for the Australians, well, words fail me. This was a real high-class performance. This was American playing, a very rare sort of professionalism”.

At 2pm that day we visited Kazan’s leading music school, which was running a very successful jazz education program. The school was quaintly called Music School Number Eleven, Kazan. The visit of the Australian musicians was obviously a major event for the children. We heard a big band which included children of all ages (plus some of the teachers), a piano trio, then a trio of electric bass, piano and drums. The latter group had travelled from the nearby town of Ulyanovsk (incidentally, the birthplace of Lenin), and included a very good female bassist. The concert closed with a hot Dixieland band.

A short talk on jazz was given by Arkady Petrof, who was represented to us as the most distinguished jazz journalist in the USSR. It was translated into English by our interpreter Victor Duda. Then The Engine Room played for about half-an-hour. This was followed by a spirited jam session, with many of the children performing with the Australian musicians. It was a marvellous event, with good feelings in the air.
We were then taken to the headmaster’s office where some Tartar food had been prepared, as well as cognac, hot tea, and coffee. The headmaster Matveev Nickolajevitch gave various gifts to the musicians, including a traditional Tartar flute for Roger. He gave me a large book on Tartar art. The others received Russian jazz records, and other items. Nickolajevitch said that one of the school’s problems was the lack of teaching aids such as Music Minus One; we said that we would do our best to send such material, if we could acquire it in Sydney.

As I was going on to Finland on my own, I left Roger, Steve and John in Kazan and missed the last performance of The Engine Room. They later reported that it was very successful. They played for 50 minutes to close the festival, after the Rova Quartet and Greg Goodman. Then a jam session had gone on until about 3.30 am, with Steve and John playing with a number of different combinations of musicians.

I saw my job on the tour as trying to ensure that the groundwork was laid for future tours of Russia by Australian jazz musicians. With the assistance of Giorgi (Sorry my English) Bakhchiev, this was achieved. Three groups toured in 1990: The Last Straw; Clarion Fracture Zone (see above); and the Melbourne duo Lewis & Young (a two-weeks tour). During 1990 the Russian return visit to Australia came in the form of the Alexander Fisher/Daniel Kramer Duo tour. That’s another story.

In June, 1994 the pianist Mark Isaacs added some jazz performances to his classical visit, courtesy of Giorgi Bakhchiev. Later, in early 1995, he and Adam Armstrong (bass) and Simon Barker (drums) – the Mark Isaacs Trio – did an incredible 20-performance tour in 15 cities, travelling along the Trans-Siberian railroad from Vladivostok, accompanied by Giorgi.

With the sudden death of Giorgi Bakhchiev in 1996, the hunt was on to find another leading Russian jazz enthusiast with his energy, and his interest in Australian jazz musicians.

Post-script on Giorgi Bakhchiev: At the time we first met Giorgi Bakhchiev, in 1988, we knew him as an officer of the Soviet Jazz Federation. We now know that Giorgi was, in fact, a KGB officer. When we were with him, either in Australia or the Soviet Union, he would constantly apologise for what he felt was his poor English expression. He would do his best to put together some phrases in English, which were invariably disjointed – and often very funny, if not hilarious –  and then say “Sorry my English”. When Roger Frampton subsequently composed the four movements of his Jazznost Suite, for John Pochée ’s group Ten Part Invention, the third movement was a tribute to Giorgi, entitled Sorry My English.

Soon after Giorgi Bakhchiev’s death in 1996, Mark Isaacs arranged a fundraising concert at The Basement in Sydney in Giorgi’s honour. This took place on March 5, 1996, and  was designed to financially assist Giorgi’s widow, Aanya.  The concert, called “To Russia with Love”, involved three groups: the Mark Isaacs Trio, The Engine Room, and The Last Straw, the members of which donated their services. In Moscow in 1996 Mark was able to present Aanya with the equivalent of AUD1,000.00 in cash, in US dollars.

“Giorgi had irrepressible energy, loved jazz dearly and was the most excellent guide through immediately post-Soviet Russia”, says Mark Isaacs.  “It was understood that he was ex-KGB. When we arrived in Moscow on the 1995 tour, we were entertained by Aanya in their apartment, along with his American friends. ‘We are friends now’, Giorgi would laugh, and speaking to the Americans, one found they were all ex-CIA.”