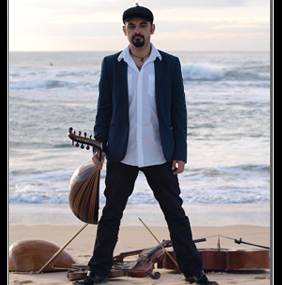 If you put out feelers, you’ll find there are some interesting oud players in the world today. There’s Lebanese composer and singer Marcel Khalife’s subtly jazz-inflected, but otherwise strongly traditional mode. Tunisian, Anour Brahem fuses Arabic, folk and jazz influences into a seamless style all his own. Rabih Abou-Khalil has created a virtual our-led big band. And there are other innovators. But if you were to ask me who’s the ling of this castle, I’d have to nominate our very own Joseph Tawadros. This, not on the basis of parochialism, but of passion and an inventiveness that seems to be born of a restless energy. he’s an explorer. Not in the Burke & Wills sense: his terrain is music and he’s always on the lookout for new topography; new landforms and textures. Better yet, he shows no respect for borders. Apparently, he can’t abide them. He has no patience for them.

Of course, my nomination isn’t the first. He’s been nominated for many things. And won. He was 2014 NSW Finalist for Young Australian of the Year. He’s won two ARIAs, two years running, for Best World Music Album. His reputation precedes him. So it is with much anticipation, especially if one has already toasted his talent, that one approaches a new release from this young oud master and composer. Permission To Evaporate was recorded in New York, in February. In two days. It features New York luminaries Mike Stern (a guitar god of jazz fusion, having played with Miles Davis, among many others) and Christian McBride, one of the baddest asses of bass; not to mention multi-awardwinning pianist Matt ‘Crispy’ McMahon and the fine-fingered drumming of James Tawadros.

The very fact instrumentalists of this calibre are keen to play and record with JT is testimony to his craftsmanship and charisma. For the CD launch of his eleventh studio album, at Cleveland Street’s 505, last night, neither Stern nor Mc Bride could be with us, but we were really none the poorer: We still had McMahon and brother James , as well as Karl ‘Sneaky’ Dunnicliff. The nicknames are JT’s invention and are a little more inscrutable that the album title which, as you might surmise, is the artist’s eloquent way of pinning those moments when we wish we could just disappear. You know, ‘beam me up, Scotty’.

With his hipster beard, signature peaked cap & scarf, JT looks every inch the renaissance man. He launches into one of the freshest tracks from the new album (which, as I write, I haven’t yet heard), in Sleight of Hand; aptly named, given the furious flurry of fingers on the fretless lute. There’s another track on the album entitle Point of Departure, but this is definitely one, quite unlike anything he’s written or recorded before. This really takes the oud into almost uncharted territory: suddenly, it’s divested of its buzzy resonances, as he plays cleanly and clearly, almost as if it was a guitar. The instrument takes on a whole other character I’ve not heard before. I shouldn’t be surprised: if anyone can eke out new possibilities for the sensually pear-shaped ancestor of the guitar, according to legend contrived by the sixth grandson of Adam, it’s Tawadros.

It begins and continues, at intervals, with discordance; it’s this radical unpredictability that makes it so crisp and startling. The oud sets up what sounds to me akin to an Afro-Cuban, as much as Arabic, motif, soon complemented by warmly syncopated bass laying down a hypnotic groove. There’s an exceedingly deft touch in the younger JT’s req (ok, tambourine, to you) playing, which drives the piece frenetically, weaving intricate patterns of percussive filigree with the utmost finesse. It’s trippy and it’s this sophistication that makes a solo, later in the evening, so compelling: he’s like Billy Cobham or Jack DeJohnette (with whom the JTs have recorded) sans sticks. It strikes me the tempo and slightly anarchic leaning of this composition would lend itself readily to a cinematic context: a chase scene, for example. Having set it up, JT let’s the band carry it while embarking on an astonishingly affecting solo interlude: it’s one of those precious musical moments in which you find yourself becoming the instrument, feeling every note as if played on your solar plexus. It’s imbued with Middle Eastern, sitaresque and flamenco flavours. JT then yields to Crispy’s mellow ivory tickling and the segue is superb. Then the whole outfit takes off, with McMahon running up and down his keyboard like a ballerino.

Another piece that marks a point of departure, apart from the namesake one, was given as the finale last night. Entitled Constantinople, it’s another showcase of virtuosity (not to mention a very edifying composition), not only from JT, but McMahon, who, even by his very considerable standards, excels with the fluidity of his soloing. Dunnicliff, too, gives even McBride a run for his money in terms of dexterity. He’s really on it. The tune, once again, is suitably named, since, in much the same way as the ancient city historically bridged the cultural divide between east and west, so too does this, albeit musically. Back in the day, the twelfth century, Constantinople was the largest and wealthiest city in all Europe and this tune also has rhythmic and melodic architecture as arresting and distinguished as the renowned Hagia Sofia, thanks to the cultivation and class of the composer. Such is the Tawadros trademark; a stamp of refinement, but never at the expense of feeling.

Speaking of stamps, I was struck by JT’s expression of enthusiasm and energy by way of his propensity to punctuate and syncopate with his boots: it would obscure too many subtleties, but it would be interesting to hear him as a one-man band, with stompbox.

In between these memorable tunes were some more melancholic ones, equally indelible, including the title track, which opens with a lilting lament on piano, joined by bass, before JT subverts it, presenting once again with what sounds to me like something one might quite readily and legitimately associate as Afro-Cuban in disposition, reinforced by James’ tapping on the bendir (a handheld ‘frame-drum’, akin to a large tambourine, but without the cymbals or bells; for all intents and purposes indistinguishable, at least for the uninitiated, from a bodhran), in the way of a cajon. I trust it’s not damnation with faint praise to describe the melody as pretty, while the solos are nothing short of dazzling. But wait, it could be Moorish, or even Romany. That’s the beauty of it, really. And as with the other tunes, the Tawadros penmanship is unmistakable.

Bluegrass Nikriz interpolates an Arabic mode, but in a way that’s all new, wrapped-up, as the name implies in country and blues. JT plays at an almost superhumanly fast tempo, making for six or so minutes of exhilarating listening and grooving. Dunnicliff’s bass really helps it rollick along too.

Tragically, JT lost both his parents recently, only a year or so apart. In their honour, he’s taken to writing pieces and performing an annual tribute. He’s written a number of tunes for his mother; Peace For My Father is the first for his dad. It’s salutary, solemn, sad and soulful. You’d have to be made of stone to not  be moved. There’s an exquisite solo from Crispy, worthy of Chopin. But apart from that, this isn’t a work that relies so much on virtuosity, as simplicity; a quiver of arrows shot straight from his heart, to ours.

Nomad’s Fear certainly shows the oud in a more traditional light, with JT bending notes well out of shape, while Big Mc strikes haunting notes on piano. In keeping with the title, there’s a feeling of wilderness, darkness, of being lost, alone and apprehensive; it contemplates the unknown, the dark and endless firmament, a void lit only by stars and the illuminations of sincere performance: narrow, splintered, succinct glimpses, such as this, into the music of the spheres.

If you were to tell me Point of Departure derived, say, from an ageless Sephardi song, I’d believe you. JT has a way of tapping into even the ancient, digging around the roots,  nourishing and renewing it; fertilising and fashioning it into something that bears ripe, fresh fruit. He seems to have no compunction, preconceptions or limitations as to where he might draw inspiration: world music often connotes fragments of culture brought together under one banner, while his is more one world music, if you will, in which styles are married into an entirely new palette of colours, patterns and textures. Again, it’s of an eloquent length, expressing what it needs and wants to, without affectation or excess. Don’t be surprised if you should find yourself swirling ‘round your loungeroom like a mesmerised dervish, should you get the album and sample it for yourself.

Leunig At Midnight honours his friendship with the creator of Mr. Curly, perhaps imagining the cartoonist’s muse, visiting very late in the evening, summoning and surrendering ideas for the artist to translate in his intensely sympathetic way. There are wondrously impassioned flourishes on oud, a propulsive bassline and more delicate and dexterous percussion from sensitive brother, James, to whom Joseph pays tender tribute.

There were one or two other pieces played, which now escape me (swept up, as I was, in the overall mood of the evening), including at least one from a previous album, but this was, for all intents and purposes, all about Permission To Evaporate. Permission withheld, Joseph. We need you around for a long time to come yet. Your art soothes the savage beast, lifts the spirit and makes us better for having experienced it.

Lloyd Bradford Syke – 'Braddo' is a creative director, journalist and broadcaster; a man of many passions, not least among them leftist politics (hell, he's even lefthanded!) and the multifarious arts; both visual and performing. He is or has been a gun communicator (is, for hire); former and, hopefully, future radio presenter; ABC Local Radio film reviewer; documentary filmmaker and more. Jazz was, is and will ever remain one of his primary, guilt-free pleasures.

For an obligation-free peek at his folio, to damn him with faint praise, or, indeed, just to damn him, or on any other flimsy premise, please email lloydsyke(at)optusnet.com.au This e-mail address is being protected from spambots. You need JavaScript enabled to view it , or call 0414 BRADS 2.