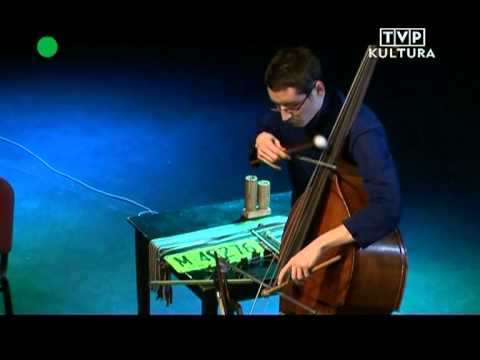 On Monday 28 June 1965 in Rudy van Gelder’s legendary recording studio in Englewood Cliffs, New Jersey, John Coltrane and a ten piece orchestra recorded two takes of Ascension, one of the most incendiary pieces of music ever issued. It wasn’t Coltrane’s most perfect recording (a few of the soloists sound ill-at-ease) but it was among his most overwhelming, far-reaching and provocative. Precisely fifty years later, on Sunday 28 June 2015 in a gallery in the inner-city suburb of Redfern, double bassist Clayton Thomas led eleven other Sydney musicians in A Paean to Ascension, a potent re-imagining and passionate tribute to the daring of a shattering cultural moment.

If Ornette Coleman was the most controversial musician in jazz history, Coltrane’s Ascension remains its most audacious and contentious recording. The reason extends beyond its intrinsic musical importance as a signifier of “free jazz” (Coleman’s double quartet record, Free Jazz, preceded it by four years) to the meaning of John Coltrane’s already established yet protean status in jazz interlinked with the unprecedentedly fevered critical contestation of the aesthetics, culture, performance practice and racial politics of jazz in the mid-1960s.

Unlike other challenging recordings by young revolutionary musicians, Coltrane’s indisputable mastery ensured that Ascension’s unrestrainedly expressive outpouring of large-scale, extended, collective African-American improvisation couldn’t be overlooked or dismissed as inconsequential gimmickry or incompetence. Ornette had seemed to explode from nowhere but John Coltrane had developed slowly, in full critical view, inside the most eminent ranks of the jazz mainstream. From R&B to bop to ballads, post-bop and the modern mainstream, to Miles Davis, to leader of the most famed quartet in jazz, his style had continually developed, from chords to modes but still within the primary flow of jazz modernism. He could still record mainstream masterpieces with Duke Ellington and crooner Johnny Hartman. Only seven months before Ascension, he recorded A Love Supreme, which was almost universally lauded, won every conceivable jazz award and was to sell half a million copies by 1970.

But under the influences of Eric Dolphy, Albert Ayler, African music, folk music, Indian music, chants and spirituals, he was finding that he couldn’t express his musical and spiritual visions within the confines of the harmonies, rhythms, timbres and performance styles of jazz acceptability. Most of all, he acknowledged the influence of Ornette (“I love him. I’m following his lead… And [without him] I don’t know if I would have thought about just abandoning the chord system or not”). Trane hadn’t yet broken from his legendary quartet but club and festival audiences were bitterly at odds over their 150 minute sets and Trane’s screaming 45 minute solos. Untroubled by ego, he was undeterred that his solos were booed by former fans. He and Eric Dolphy calmly tried to explain their music to abusive critics but the effort proved fruitless.

By the time of Ascension, jazz had split into mutually hostile camps. Established critics and many mainstream musicians of both colours derided the so-called “free jazz” created by Ornette, Ayler, Shepp, Cherry, Pharoah and others as meaningless chaos, played by young political firebrands who elevated racial assertiveness and political anger above musical aesthetics. George Lewis observes “it is doubtful that any music, anywhere, has received such harsh criticism as did this new music in its formative years.” It was easiest to dismiss its young lions as musical incompetents, frauds and publicity hounds, simply incapable of playing a music that adhered to exacting standards of harmony, time, tone and melody. But Coltrane was the most accomplished virtuoso in jazz, renowned as a paragon of integrity and also at the top of his professional tree. It was nearly impossible to dismiss his music as a product of technical immaturity, publicity-seeking or personal anger: like Ornette, he was among the sweetest and most loving of men. So Ascension appeared not as another pleasing piece of vinyl but as a shocking and decisive salvo in a cultural war. To both sides it appeared as an earth-shaking declaration that John Coltrane had abandoned respectable jazz modernism and respectable, gradualist political assimilationism. With battle lines encompassing race, politics, philosophy and aesthetics, Ascension seemed to announce that John Coltrane had joined the pariahs condemned as “anti-jazz” (really, despite dedicating his entire life to it). He was an apostate, a heretic. It was like Tim Costello deciding to declare that he was abandoning Christianity and democracy to ally himself with ISIS.

Trane explained that his transformation was more than musical. It was strongly spiritual and Coltrane, not primarily a highly politicised man, had courageously aligned himself with openly revolutionary, often reviled forces in African-American culture and politics. Four months before Ascension, his quartet played at a Black Arts Repertory Theater School benefit with Cecil Taylor, Sun Ra, Archie Shepp, Albert Ayler and Betty Carter. He was never to rest: last year’s official release of his astounding Temple University concert shortly before his 1967 death documents a human being relentlessly searching to find new, non-saxophonic means (chest-pounding, vocalising) of presenting the sounds he yearned to convey.

Long regarded as forbidding, fearsome, harsh and inaccessible – even for late period Trane – I played Ascension (Version 2) at home before the concert for the first time in years and was surprised to discover a warmth and openness that I didn’t at all remember. Who knows? Perhaps the cultural waves set in motion by hearing so much music influenced by Ornette, Sun Ra, Don Cherry and many non-western traditions has eroded barriers, enabling our ears to evolve and open to sounds that once jarred.

Another inspiration was presenting two versions of Ascension, on either side of an interval (during which Thomas paid an eloquent tribute to Coltrane and Ornette). Coltrane recorded two takes of Ascension and a production foul-up made both famous. Coltrane preferred the first take but the second take (aka Version 1) was accidentally released. As soon as the error was realised, Impulse replaced it with the first take (known as Version 2) without making requisite changes to the sleeve notes, which wrongly listed the soloists in the order they appeared in Version 1. Decades later both versions were released on a CD.

Thomas’s first version of Ascension began with the startling invocation of Clare Cooper’s solo harp. It was impossible not to envision Alice Coltrane long spiritual journey and the quest that Trane would embark on during the few years left to him after Ascension. Cooper’s harp evoked a spiritual dawning; a ringing centre unfurling from the heart of the throbbing collective universe that would ensue.

For the remainder of both versions, the music followed the broad path of Coltrane’s recording, the open form of which has succeeded in inspiring international re-creations. Swirling polyphonic horns and basses, piano and drums stated an ominous, dischordant theme building to crescendo. Then a soloist or instrument would improvise before an ensemble section again reached crescendo before the next solo. After the harp introduction and first ensemble passage, the opening solo was wisely allocated to Peter Farrar, one of the most extraordinarily expressive talents yet to emerge in Australian jazz. His dramatic opening solo set off by multiple drums and Matt McMahon’s piano interjections prefigured the full range of affective possibilities that were to emerge. The next ensemble was followed by Shota Matsumura, a young, brilliant, chronically exploratory trumpeter, whose imaginative diversity testified in the wildly divergent approaches he took to his solos on either side of the interval. His second was a low haunted foghorn gradually turning sibilant and culminating in falsetto vocals; in the first he blasted a proclamation, his bell jammed into the microphone with drummer Miles Thomas rolling with mallets and Clayton Thomas throbbing on bass.

It’s impossible to do justice to each of the musicians or their solo statements. Standouts in Version 1 included trumpeter Simon Ferenci’s lavishly broad tones pursued by bright peals of upper register with Clare Cooper’s harp strums and sticks work cutting through the collective tones and rhythms. Mary Rapp and Clayton Thomas cross-fertilised in a striking arco and pizzicato bass duet with drum interjections towards the end of Version 1 which, after an ensemble crescendo, slowed with drums drifting out and horns, harp and piano in diminuendo as the horns whistled and breathed to a close in sated expiration. In the interval Clayton Thomas offered an eloquent tribute to both Coltrane and Ornette, who had died a fortnight before.

In Version 2, a lyrical solo by Sam Gill was prodded by Matt McMahon’s stabbing piano clusters, building into a collective of screaming horns and thundering bass and drums mightily powered by Finn Ryan. An Andrew Fedorovic solo took on keening, Arabic qualities. But there were no greater highlights than towards the end of Version 2. Peter Farrar took the world apart in a gloriously exultant hymn of ascension that was the most magically Coltrane expression of the night. After that, a Matt McMahon/Clare Cooper piano/harp duet embellished by Miles Thomas’s sensitive drum accents gently transported us from surface maelstrom to a warm haven of peace inside the storm. A final ensemble, slow and wistful in acceptance, concluded. Legend has it that Trane wanted to record a third take of Ascension but Elvin Jones refused. It might have been just as well because the Sydney audience was sated and the musicians were dripping like taps.

Contrary to bad raps sometimes ascribed to free jazz, there wasn’t an indulgent minute or a grating annoyance anywhere. Both versions sped by and the mostly young, gratifyingly numerous audience exulted in a sense of joy, lyricism, power and transcendence. They were shorter than Trane’s original (about half an hour each, compared to the originals’ 40 minutes plus) and, fortunately, both were recorded by Peter Nelson. If the recording conveys the brilliant realisation of a pivotal moment in the history of creative music, may it become available for those lucky enough to attend and those who couldn’t.