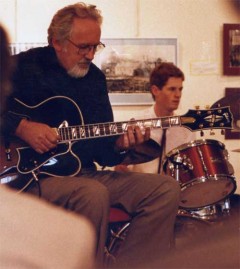 Melbourne guitarist and teacher Bruce Clarke, who was this year honoured with a Medal of the Order of Australia for his services to the arts, died on 24 July aged 83.

The following is part of Bruce’s Wikipedia entry:

From 1949-1956 Clarke worked as a freelance guitarist-arranger among the many live radio orchestras. He accompanied overseas artists on their Australian concert tours and played in the dance halls and ballrooms that were the mainstay of pre-television social life.

In 1956, television arrived in Australia and brought this era to a close. Bruce moved into film and television music production and composition. He established his own studios and production company The Jingle Workshop in 1957. He wrote and directed over 3000 television and film soundtracks for local and overseas producers between 1957 and 1974, some including vocalist Helen Reddy. As well as guitar he made extensive use of electronics, including the Moog synthesizer.

During this period he continued to perform. He accepted a commission to realise the first major Australian electronic work for the 1968 Adelaide Arts Festival, and conducted performances in Melbourne of works by 20th century composers Stockhausen, Berio and Webern. He toured Europe as guitarist with composer Felix Werder’s Australia Felix Ensemble. He also appeared with the ABC orchestras under the batons of Sir John Barbirolli, Charles Mackerras, John Hopkins and others. In 1981 he played second guitar to John Williams with the Melbourne Symphony Orchestra in Andre Previn’s “Concerto For Guitar And Orchestra”.