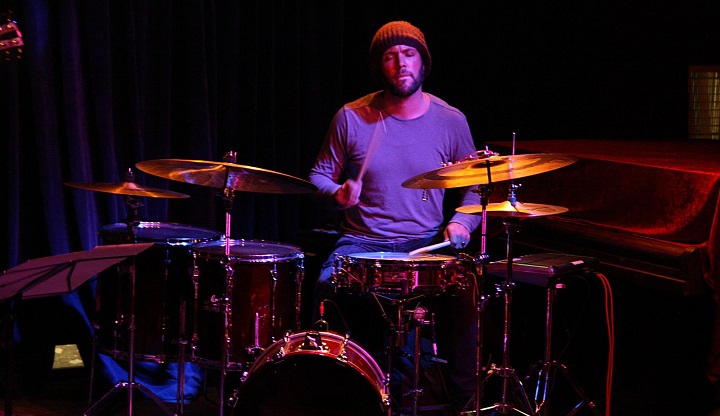 I initially thought local label, Art As Catharsis was named so as yet another piece of post-post-modern irony. But having listened to many of their releases, I know now it is not – the music is entirely cathartically moving, innovative and beautiful. No exception is the label’s recent release of Paul Derricott‘s Coast. Named for the band Derricott has put together for this project, ‘Coast’ refers to the meeting of shore and sea – as he puts it: “(the) Sydney coastline, the thin line between bobbing up and down our heads above the water and the unrelenting energy of the ocean that surrounds…”.

And the ocean metaphor is all over this music. Derricott has always been one of our most surprising drummers, technically exciting while at ease in any improvisational situation, creating effortlessly and colourfully. The Coast ensemble could not have been better chosen to bring his vision to life – Shannon Stitt on keys, guitarist Peter Koopman and Michael Avgenicos on sax.

No having a dedicated bass player – Stitt contributes bass on the keys –  lends the music an original flow. It pushes the arrangements into places where new funk can flower, or the push-pull of rhythm section becomes more tense. Of course, Stitt’s facility could have him easily emulating a bass player, but that would entirely miss the point, and confuse the trajectory of this music.

Opener ‘Blackline’ sets up a template of heavy syncopation, bringing to mind 70s proggers Van Der Graaf Generator and recent Scandinavians Elephant 9, before smoothing out for a flowing Koopman solo – his playing, like that of John Scofield, always has a tang of the blues no matter where he takes it.

‘Tide’ contrasts with a liquid ambience – the benign calm of the sea after ‘Blackline”s squall storm – it’s melody ebbing and flowing back and forth.

‘Or Not’ leaps out of the box with a funky waaaah!, jumping between time signatures before devolving into heavy sludge – a dazzling play of contrasts that keeps your ears pricked up. Michael Avgenicos and Derricott play a drums/horn conversation that really cooks, adding some tropic heat to the beach.

Conga player George Rojas is added for instant Latin on ‘Dance 35’ which winds its way to a 7/8 montuno that frames Derricott’s drum solo – his solo here is a highlight of the many highlights across Coast.

Paul Derricott has surprised us consistently with his projects and collaborations such as Arrow, Derroderro, The Dilworths and Tiny Hearts as well as performances with… pretty much the Australian improvised music phone book. The smartly considered compositions and arrangements on Coast, together with this unusual line-up of hand-picked players make this album yet another beautifully realised project in his catalogue.