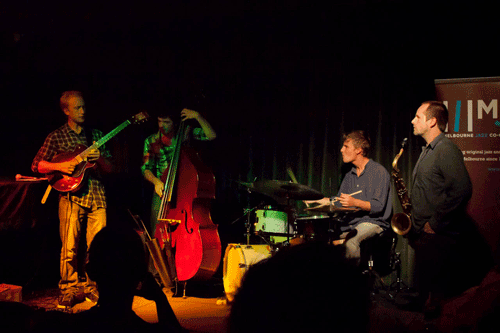 Tasmanian guitarist Julius Schwing has recorded a love letter to an isthmus.
The Neck is a narrow band of land on Bruny Island and Schwing has drawn on years of living with The Neck – and with all its moods – to create edge2:isthmus as part of a collaboration with visual artists for MONA FOMA 2016.

He has absorbed the spirit and the magic of the Neck into his own body and released it as music using the sparest of means: the traditional jazz guitar trio of guitar, acoustic bass and drums. It needs nothing else to convey everything he needs to say.

Schwing writes: “When standing at the Neck I see/hear the environment along a pitch scale. Or a colour scale.”  As well as being about this unique formation specifically, edge2:isthmus seems to be about nature. It is also about man as part of nature, paradoxically fighting and hurting the thing he is has an inextricable link to.

‘From Within The Car Of A Comfortable Tourist’ bounces with a West African gait, almost comically depicting said Tourist, who I bet stays in his car, snapping away with his iPhone (great bass solo from Nick Haywood here).

‘They’re Gonna Seal The Road’ is a minor Spaghetti Western blues – an ‘agonised lament for the gravel road’, a weep for a small paradise, and its ‘prettiness’, paved over.

But, away from the anger, it is Schwing’s affirming pieces that make this album for me. Opener ‘From Above’ ululates like wings, like a propeller as we rise into the sky and look down upon The Neck. ‘The Isthmus Exists’ is a statement of the nature of nature: change comes and goes, nature always is; The Isthmus Is.

‘Neck Nocturnal’ (based, it says here, on Ornette’s ‘Lonely Woman’) is Schwing painting The Neck after dark. It is lively – ‘I feel The Neck sleeps during the day and only comes alive at night’ – its guitar/bass/drums dance bringing to mind the great organic spark of John Abercrombie with Jack deJohnette and Dave Holland on ‘Gateway’ and other 70’s ECMs.

Last track ‘Quaternary Rage’ has the sound of anger – low growling guitar, squalling squealing bass, pulverised pulverising drums (drummer Alf Jackson, so sensitively intelligent on all other tracks, brutally storming here) – but it is not about anger, it is about natural power. It is the force of a roiling boiling storm blitzing The Neck from all sides – ‘the sand gets pushed around by all the elements’. This is nature grinding away, smashing and reshaping itself, with itself.

The most affecting piece on edge2:isthmus is ‘Nocturnal at The Neck’ – simply a restatement of the ‘Neck Nocturne’ theme played solo by Schwing. Solo, yet not solo – he is accompanying by the wind, and the soughing waves of The Neck itself. ‘Nocturnal at The Neck’ is recorded on the beach en plein air. It is a reminder that the wind of the Neck, the waves, the sand, the weeds, the millions of one-celled sand dwellers and the birds of the air are as much musical contributors to edge2:isthmus as are Schwing, Jackson and Haywood.

Listen and let The Neck surround and wash over you. You won’t hear anything like edge2:isthmus this year or any other past or future.