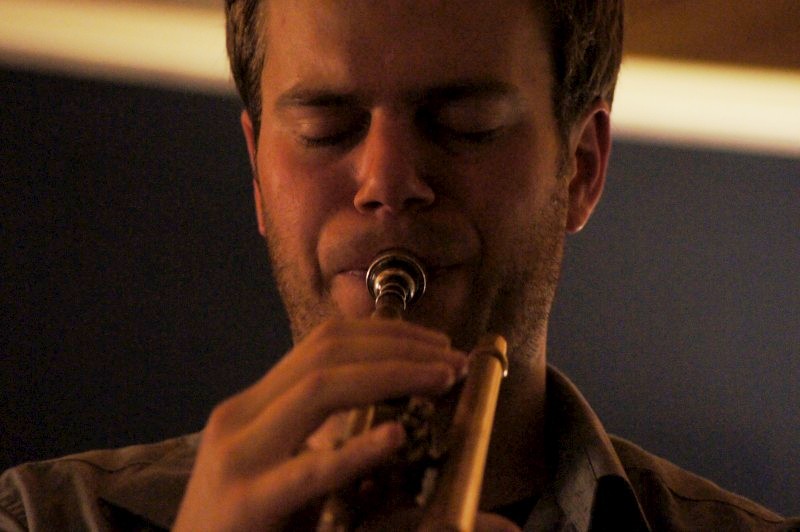 In 2014 Ensemble Offspring launched a new education program, The Hatched Academy, to mentor emerging performers and composers passionate about building a career in new music.

The inaugural participants both come from backgrounds in the jazz world – Sydney-based composer (and saxophonist) Jeremy Rose and trumpeter Callum G’Froerer, who hails from Perth and is currently based in Melbourne. Rose’s many projects include groups The Vampires, The Strides and The Compass Quartet and G’Froerer works across both improvised and notated performance, commissioning and premiering new works both as a soloist and with groups like Melbourne’s Cathexis Quartet.

“We are delighted to have two musicians originally from the jazz sphere in residence with Ensemble Offspring as part of our Hatched Academy. Jazz and contemporary classical music are often perceived to be at opposite ends of the musical spectrum yet the concepts of freedom, experimentation and open mindedness are deep commonalities that Ensemble Offspring musicians and this year’s Hatched Academy participants share”, said co-Artistic Director, Claire Edwardes.

Ensemble Offspring’s Artistic Directors, percussionist Claire Edwardes and composer Damien Ricketson set up the Academy as a way for the group to be able to give back and provide opportunities to the next generation of musicians. According to Ricketson, “If the Sydney Spring Festival hadn't taken a risk on a group of young Sydney musicians some 20 years ago, Ensemble Offspring and multiple individual careers in new Australian music may never have happened. The least we can do is offer some similar opportunities to the next generation.”

The Academy provides hands-on, practical experience in the day-to-day administrative and artistic management of an ensemble committed to a living classical music tradition, as well as workshops, mentoring sessions and creative development with Ensemble Offspring to further develop skills in composition and specialist performance techniques.

The year has already seen Rose and G’Froerer active within the ensemble, performing in the group’s annual “Sizzle” – a relaxed, Sunday afternoon gig at Sydney’s Petersham Bowling Club – in a rendition of John Zorn’s improvisatory game piece Cobra, and Rose performing a set with his trio (also featuring Jackson Harrison and Laurence Pike).

Celebrating the inaugural year of the Hatched Academy is a showcase concerton 30th October at the Sydney Conservatorium. This performance features two world premieres from Jeremy Rose, Rites for trumpet and percussion, and Border Control for quartet, a musical response to the ongoing human rights dramas in Australia. Both pieces were developed and workshopped during the Academy with mentors Claire Edwardes and Damien Ricketson, established Ensemble Offspring performers Lamorna Nightingale (flute) and Jason Noble (clarinet) and co-participant G’Froerer. G’Froerer will also be featured in Matthias Pinscher’s tactile, introspective solo requiem Shining Forth, pushing the trumpet from the edge of tonelessness to its maximum force, as well as the Australian Premiere of Stockhausen’s trio QUITT. The concert also includes world premieres from Sydney composers Cor Fuhler and Amanda Cole.

Ensemble Offspring are now seeking applicants for the 2015 Hatched Academy, which will involve the next participants in a busy and exciting year as the group celebrates it’s 20th Birthday.