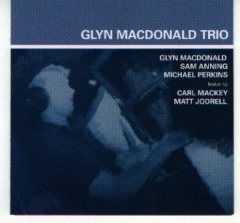 The launch, held at the Spare Parts Puppets Theatre was a huge success, with a hugely appreciative, almost full house.

The evening cast a spotlight on Glyn’s compositional abilities, ranging from introspective ballads to funky grooves, styles that Glyn moves within with consumate ease.

The evening was a credit to Glyn’s vision, dedication and organisation, and it was with great pride that I was part of the audience that was stamping and cheering for a final encore.

The band finished with “If I Were a Bell” – the only non-orginal piece of the night, to “leave you all swinging”, as Glyn put it.

And it certainly did….

It was a memorable night, and marks the beginning of a joint effort to present more jazz in different venues throughout Perth.

The Glyn MacDonald Trio will be appearing later in the year at the Spare Parts Puppets Theatre with special guest, vocalist Bronwynn Way.

The stunning new CD by the Glyn MacDonald Trio, with special guests Mat Jodrell and Carl Mackey is available in record stores or by mail order from JAZZWA.