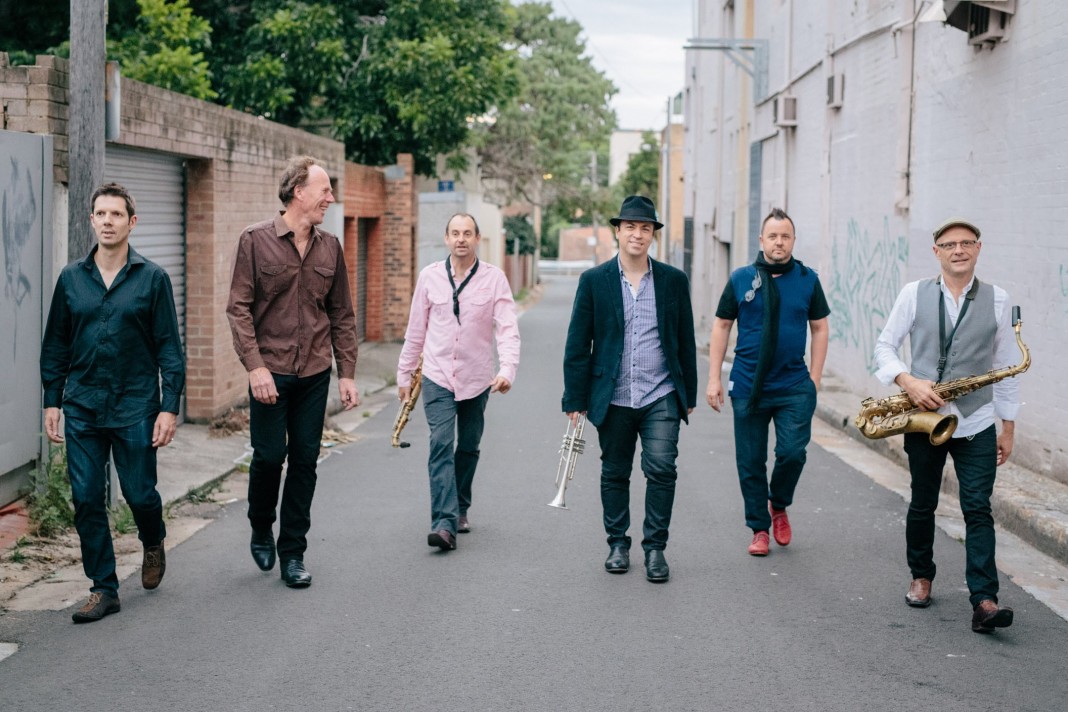 “Of particular note was Bruer’s outstanding and aggressive solo work in the several bluesy numbers, which showcased both his technical excellence and musicality.” Review by Simon Hukin

The creation of Jason Bruer, a recently repatriated tenor saxophonist and bandleader returned to Sydney after many years in London and innovative local drummer Duncan Archibald, Hammerhead are a hard bop sextet from Sydney featuring Ray Cassar on trumpet, Andrew Robertson on alto sax, Greg Coffin on piano, and Matt Gruebner on bass.

The group has a laid-back energy on stage, with each player obviously immensely comfortable in the dynamic. Bruer as front man was funny and engaging and the rest of the band looked relaxed and confident, despite the fact they were surrounded by video cameras. Apparently the gig was being recorded for Hammerhead’s website, though there was a conspicuous absence of the conventional release forms!

The group seemed well suited to the space, which the Street Theatre had done up in a style something between high-class bordello and seedy Parisian jazz club. The sound engineering was a notch above normal too, with the various instruments crystal clear when soloing and well blended otherwise. Their set consisted primarily of Bruer’s original hard bop and funk bop charts, liberally scattered with thoughtful arrangements of hits by the likes of Wayne Shorter, David Sanborn, and Pat Metheny.

Most of the set was drawn from their album Mozaic, which was launched in August. It was a little sad to see that there were few new charts on their books since its release, but also to be expected. Nonetheless the arrangements and performances showed a polish and finesse not often found in Australian small bands. Among the highlights was the funky and forceful arrangement of Eddie Harris’ Sham Time, which all of the soloists tackled with obvious enthusiasm. Of particular note was Bruer’s outstanding and aggressive solo work in the several bluesy numbers, which showcased both his technical excellence and musicality.

The rich harmonies and stylish rubato of Coffin’s feature in an arrangement of Joe Henderson’s Power to the People evoked the ghost of Bill Evans, and the chart itself was an engaging, funk inflected romp. The brilliant contrapuntal movement in Wayne’s World alongside a scintillating, finger-burning solo from Andrew Robertson on alto brought whistles and cheers from the appreciative audience.

In the up-tempo Art for Art’s Sake my eyes were drawn to the drummer. Archibald’s assured yet understated beat provided perpetual interest and linked tightly with Greubner’s basslines, and together they gave the band its endless forward momentum. Originally a Metheny tune the bluesy, down-tempo ballad Sometimes I See was respectfully handled by Bruer, and featured a tranquil Ray Cassar on flugelhorn.

The gig was rather short – no interval and relatively few charts in the set. However, this wasn’t much of a problem. Hammerhead did not outsay their welcome, yet managed to leave a deep impression on the minds of their audience, providing an introduction to a genre not often heard unadulterated in Australian venues.

Despite the position of bop as the defining jazz sound in the minds of casual listeners many jazz pundits argue that hard bop is dead, its motifs and techniques subsumed into other dialects. Modern jazz is characterised by this synthesis, with elements of rock, pop, funk, and art music creeping in to more traditional genres under the heading ‘fusion.’ If Hammerhead aren’t trying to bring bop back, they may end up doing it by accident. They are cohesive, engaging, and imaginative. Their fresh take on an older jazz idiom is built on fine musicianship and engaging original charts. If you can make it to one of their gigs, you’ll definitely leave bopping.