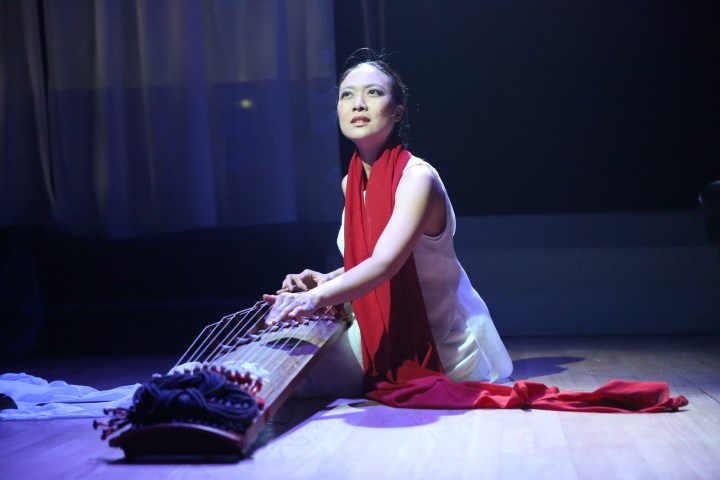 After rave reviews from her last visit to Australia Jen Shyu returns, here she talks to Jazz Australia

JA: What was the inspiration  behind your project “Song Of Silver Geese”, which you will perform at the Sydney International Women’s Jazz Festival?

JS: Song of Silver Geese actually began as processing grief from the death of my good friend and wayang kulit master dhalang Sri Joko Raharjo “Cilik,” who was killed in a tragic car crash at the age of 30 in Central Java in 2014, along with his wife and baby boy, who was about 11 months old. They were all sleeping in the car when the driver looked down for a second to switch the radio channel, only to miss seeing a cement truck stopped in the road in front of them. But by some miracle, their daughter, who was sitting behind the driver, survived without barely a scratch. So the piece became her story after the moment of impact from the accident, where I imagined time stopping, and where three guides from Taiwan, Timor, and Korea help her carry on after this tragedy.

About a year later, after performing many improvised rituals for Sri Joko’s family, a mentor of mine who was a Taiwanese engineer but also a poet and active member of the Taiwanese community in San Diego, passed away from cancer. I had already set some of his poetry to music, but his words inspired the crux of emotions in this new piece, especially the last lyrics of the work, “Life has no boundaries when every place can be home.” The work is about the desire to communicate with one’s lost loved ones, something everyone deals with as human beings. It is a meditation on this universal, that very delicate line between life and death, absence, and memory.

JA: You perform this piece in seven different languages. Can you explain?
JS: I have always loved the beauty of languages, and how they are a direct expression of a culture. I personally try and learn as many languages as possible as another means of communicating — this is especially beautiful to me during my travels, when I can just make a connection with someone thanks to language, and a stranger can instantly become a friend, not to mention helping people who are lost or confused in the country, and I can help in some small way to make them feel comfortable. I am up to being able to speak 9 languages, with Indonesian being my strongest other language, with the goal of learning at least one new language a year until the end.
In this piece, the stories I wanted to tell involved these 7 languages – in order of appearance, Javanese, English, Indonesian, Taiwanese Hokkien, Mandarin Chinese, Tetun Fehan of Timor, and Korean. The languages express the different stories coming from Java, Indonesia; Hengchun, Taiwan; the Wehali Kingdom now centered in West Timor; and South Korea. The languages themselves express whole worlds, just as the traditional musics that this work is based on.

JA: Tell us a little about some of the traditional instruments that you play and do you have a favourite? I love them all and definitely do not have a favourite!
JS: For this performance, I’ll be playing the Korean gayageum, Taiwanese moon lute, and the Korean soribuk drum that is typically played especially for the epic storytelling and singing of Pansori. I play all the instruments sometimes in a traditional manner, and sometimes in a new way, animating the instruments with human qualities. I don’t like labels in general, and that includes the term “performance art,” but rather I think that it is all part of telling the stories in an authentic and personal way while at the same time, honoring my teachers and the traditions which I have been blessed to be able to study.

JA: Simon Barker is one of the local musicians who will accompany you at this performance. Tell us a little about you association with Simon and how you first met?
IJS:  met Simon in 2013, in the middle of a long and beautiful journey to Indonesia, East Timor, and Korea. It was at a moment when I was enjoying a “career” as an experimental jazz singer in NYC, but felt the need to go deeper into my fieldwork and inner voice. There is nothing more beautiful in life than buying a one-way ticket to somewhere, keeping the future open for multiple and infinite paths. I think it is no coincidence that I met Simon along this journey.

In 2010, just after returning from doing three months of traditional music research in East Timor, a friend turned me onto three films, which inspired me to study both Korean Pansori and East Coast shamanic singing: Chunhyang and Seopyeonje directed by Im Kwon Taek and also Emma Franz’s documentary, Intangible Asset No. 82, which featured Simon. I instantly fell so in love with both song forms and all the complex music in which the voice lay that I vowed I would go to Korea someday to study it. But then I received a Fulbright scholarship to study sindhenan, the singing of Javanese gamelan music, so I dove into this world  first starting in September 2011 and for much longer than the official length of my scholarship, which was to end in October 2012. I stayed until May of 2013 because I was just beginning to learn the artform of Ledhekan, which involves performing Javanese dance while singing sindhenan, and I just wanted more time to get deeper in these traditions, which like all the musics I am attracted to, really are worth lifetimes of study.

Then through a chance meeting and very fortunate circumstances thanks to my Jogja-style Javanese dance teacher Bu Sutiyah, I heard about and applied for a 6-month scholarship to study Pansori as well as Gayageum Byeongchang in 2013, sponsored by the National Gugak Center via the Cultural Partnership Initiative. I got it and went straight from Indonesia to Korea. It was during these 6 months that I got to meet Simon, and we got on right away. I actually had met Bae Il Dong first through percussionist Kim Dong Won when studying janggu at the National Gugak Center, and started taking “Dongpyeonje” (Eastern style) Pansori lessons from him along with my other teacher Kwon Song Hee, who was teaching me Seopyeonje, or Western style Pansori. I went to see a performance that Simon gave with an amazing East Coast shaman percussionist named Kim Jung-Hee, and it was amazing to hear how Simon completely had these rhythms inside of him and how strong his own sonic language was… we hung out afterwards and spoke at length about music and life and all in between. He then came back to Busan to collaborate with an incredible dancer Jun In-Jung, and after one of their rehearsals, he took me to a 24-hour East Coast shaman ritual of the descendants of Kim Seok Chul, and though he had to return to Busan, I stayed and then was invited to follow the family to a 3-day ritual. I stayed for 2 days only because I had to attend Korean language class through my sponsor, but since then I have attended many rituals…and I returned to Korea in 2015 in order to study this singing more, with Seo Hanna of Kim Seok Chul’s family. I owe so many thanks to Simon for opening me up musically and philosophically—and also have gotten introductory barefoot running lessons from him. He is an amazing human being.

JA: You have studied and performed in many different countries throughout the world such as Cuba, Taiwan, Brazil, China, South Korea, East Timor, and Indonesia – how do all these different influences come together in your work?
JS: I hope you’ll come on November 9th and see how! It is an organic process for me involving constant rigorous study parallel to constant rigorous creating and experimenting. I need both as an artist, sometimes at the same time, sometimes alternating in focus. But the depth and surrendering yields the organic flow of things.

JA: You made a wonderful impression on Sydney audiences when you performed for SIMA in August of 2016. Tell us a little about what you have been doing since?
JS: I am most excited about the new album Song if Silver Geese on Oi Recordings that we will have available at the festival! And a new solo work, Nine Doors, came out of the piece, which was even more theatrical, and I have now brought elements if that into Song of Silver Geese.

JA: What can audiences expect this time around from your concert at the Reginald Theatre?
JS: Expect to be pleasantly shocked, healed, and left more curious about the world and perhaps some more insight about yourself.