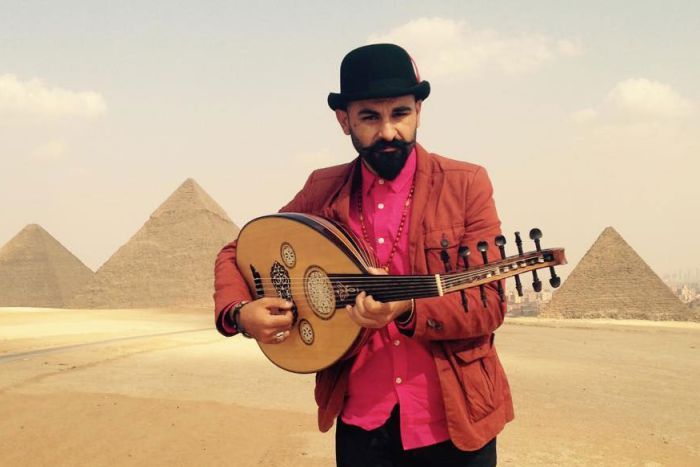 Performance May 2017 at Camelot

Composer and Oud virtuoso Joseph Tawadros has caught the imagination of musicians and music enthusiasts alike with his amazing talent. At the age of 33 Tawadros is only getting warmed up, with 13 studio albums under his belt already and a staggering 15 nominations for best world music album from the ARIA awards (winning it 3 times in a row between 2012 to 2014) making him a household name in Australian and abroad.

The Egyptian born musician who grew up in Sydney is now living in London and to the appeasement of his fans he’ll be releasing a new live album in July recorded earlier this year at the famous Abbey Road Studios.

To categorize Tawadros music is a challenge in itself as his sound is constantly evolving and the band’s line up is ever changing having travelled to places like New York over the years and recording with jazz legends such as John Patitucci, Jack DeJohnette and Roy Ayers to name but a few. Tawadros is classically trained but his music has a contemporary edge as he is able to seamlessly fuse traditional Middle Eastern music with jazz and has even done some special concerts with chamber and symphony orchestras from Australia and around the world.

Tawadros has an extensive repertoire of compositions to play on stage and packed out the Camelot Lounge in Sydney’s Marickville last Wednesday night; latecomers found no empty tables and instead they had to find a stool to sit on. The audience was eager, the atmosphere lively inside this artistic hub and it promised to be a great night of music and entertainment.

The musicians were greeted on stage with a warm applause, the quartet consisted of Tawadros and his brother James who has played tambourine in all of his albums; they are essentially inseparable in music and blood as the percussion plays a minimal but important fundamental role in his compositions, Australian iconic jazz pianist Matt McMahon and double bass player Karl Dunnicliff. Without introductions, the quartet started playing as soon as they went on stage and from the very first note the audience was taken on a totally spellbinding sonic journey with a meditative like quality that is very apparent in this improvised jazz/world music fusion.

The concert was divided into two halves with an extended intermission; in the first half of the show the audience was treated to the music from Tawadros’s latest album “World Music” where he played 52 instruments whilst his brother managed a further 11. As a gifted multi-instrumentalist, Tawadros played a few of those instruments live at The Camelot Lounge including electric violin, hulusi flute and the qanun.

Throughout the entire first half the music spoke for itself as there was no need for any communication with the audience. The second half however was a completely different scenario as Tawadros’ inner comedian came out and made the audience laugh out loud with his introductions and anecdotes. His brother James was very often a target of his jokes as he is a quiet introvert and Tawadros was always trying to get him to say something on the microphone but only once did he ever mutter a single word.

Along with all the joking about Australian values and the Tawadros family the second half unsurprisingly had fantastic music, punctuated with bending notes that inspirationally fall under the Phrygian scale. You can tell music runs deep in all the musicians’ veins as they were all in their creative zones and at times their playing had pockets of energy that translated into playful fun on stage.

As the evening progressed, each composition the quartet played got an even louder applause and they were not to leave without an encore. With only hours of practice but years of honing the craft these musicians were able to accomplish a magical performance on stage and for fans who did not get enough on one night alone, Tawadros was happy to announce they would be returning to Sydney on the 19th of July to launch their new album “Live at Abbey Road”. If you haven’t seen the Joseph Tawadros band live before do yourself a favor and go see his show in July as he will be performing again for a packed room at The Camelot Lounge, so make sure you buy your tickets on time and get there early in order to get a table.