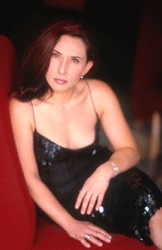 Even if you have only brushed with the Perth Jazz scene, you will surely have come across the fabulous Libby Hammer. Libby is (with good reason) one of Perth’s busiest vocalists.

Her stage presence, her sultry and sophisticated vocal style and charismatic performances continue to enthrall audiences and always leave them wanting for more. She is an entertainer in the true sense of the word. The “oo-scoo-dlya- boo” of the jazz scene.

In Hip Mo’ Toast, her main band, she has assembled some of Perth’s finest musicians, who complement her vocals with slick arrangements of jazz standards and originals, which are always very finely crafted. And most of all, they have fun. In addition to the Hip Mo’ Toast 5-piece band, which features Grant Windsor on piano, Graeme Blevins on saxophones/ flute, Shane Pooley and Pete Guazzelli on drums, she can also been seen with her big band, not surprisingly called the Hip Mo’ Toast Big Band, which is a regular favourite at outdoor events and major functions.

Libby recently played to packed, cheering audiences at the Fremantle International Jazz Festival, as part of Scat & Tap which featured US tap dancer Joshua Hilberman. This unusual combination delighted the audiences, and confirmed Libby’s vocal prowess and flexibility at the highest level.

Her love of music goes back to her early childhood, when she learnt piano and flute, and at age twelve she got her first taste of performance, playing a street urchin in La Bohème and an orphan in Annie, both at His Majesty’s Theatre, in 1981.

In 1989, she graduated from the University of Western Australia, and subsequently performed in the production Barnum, again at His Majesty’s Theatre. She was required to train intensively in circus skills, and this launched her into a colourful 4 years as a birthday party clown called Looby Loo.

However, it was Libby’s growing interest in jazz music that led her to the Western Australian Conservatorium of Music at the Academy of Performing Arts where Libby completed a Bachelor of Music (Jazz) in 1997, majoring in arranging and vocal performance. She was also resident vocalist for the WA Youth Jazz Orchestra (WAYJO) in 1993 and 1994.

Hip Mo’ Toast won the 2000 Perth Jazz Society Award in recognition of “artistic excellence in performance and outstanding contribution by a group in the area of innovation and jazz advocacy”.
They have also won the 2000 and 2001 Western Australian Music Industry (WAMI) Association Awards for Best Original Jazz Act.

In February 2001, Hip Mo’ Toast completed their first tour to Sydney and Melbourne where they performed to enthusiastic crowds at the Basement and Bennett’s Lane respectively.

Libby can be seen regularly around Perth, with her own trio and Hip Mo’ Toast and details of her April gigs can be found in our update section. For more info on Libby and details of forthcoming album releases, check out her profile in our musicians & bands section.

On July 26 and 27, Libby will be appearing in a Tribute to Frank Sinatra with another vocal favourite James Flynn and the West Australian Symphony Orchestra at His Majesty’s Theatre. Also on the 3 and 4 May, she will be performing at the Cabaret Soirée in Libby Hammer: My Favourite Songs. Tickets for both these events are selling fast – so get in quick, they are not to be missed.