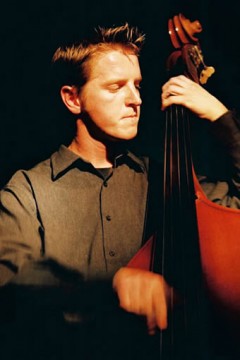 Another face that it is difficult to miss at jazz venues around Perth is that of young bassist Matt Willis.

Perth is fortunate to have a number of very fine bassists of all ages, many with national reputations, and Matt has certainly been making his mark as an up and coming jazz talent.

At the recent Fremantle International Jazz Festival, he accompanied some of the interstate and international guests in fine style, including Joshua Hilberman (with Libby Hammer) as part of scat and tap, Barney McAll (now living in New York) and Mimi Fox. He also played bass on the new Jodie Tes album ‘Sol’ featured last month.

Matt has now been performing, recording and teaching professionally on the Perth music scene for over five years. He has mastered both electric and double basses, and is plays in many different ensemble settings, covering all styles from jazz, latin and funk to classical. Some of his career highlights have included performances alongside such musical luminaries as Randy Brecker, Billy Cobham, Frank Foster (leader of the Count Basie Orchestra), James Morrison, Mark Levine, Rolf Harris, Don Burrows, Mimi Fox and Daryll Somers.

Whilst completing a Bachelor of Jazz Performance at the West Australian Conservatorium of Music in 1999, Matt had the opportunity to successfully audition for the West Australian Youth jazz Orchestra. It was with this Orchestra that the opportunity to tour and perform at the 2000 Sydney Olympic Games arose and the tour was hailed a success. Alongside this experience Matt received the 2000 Australian Arts Council Fellowship Scholarship for recognition of his contribution to the Orchestra.

In 2001 Matt participated in the Melbourne International Jazz Festival as part of “BlueZone” performing at the distinguished Bennetts Lane Jazz Club. Here five of Perth’s leading musicians performed a complete original repertoire to captivated audiences under the direction of guitarist Freddie Grigson.

2001 also saw the Western Australian Music Industry (W.A.M.I.) awarding The Russell Holmes Trio (in which Matt plays double bass) with the “Most Outstanding Jazz Group” award in recognition of the trio’s performance.

As well as having the opportunity to showcase his talents at the 2002 International Fremantle Jazz Festival, he also had the chance to perform with members of the distinguished Mingus Big Band (along with Jamie Oehlers, the Mackey Brothers, Russell Holmes, Simon Jeans and Darren Moore) at a late night jam session in the Kaboodle Lounge in Fremantle. It was an incredibly memorable experience for all who witnessed it, and the stuff of which legendary jam sessions are made.

With the international scene in sight, Matt Willis is aspiring to travel, perform and continue studying worldwide.