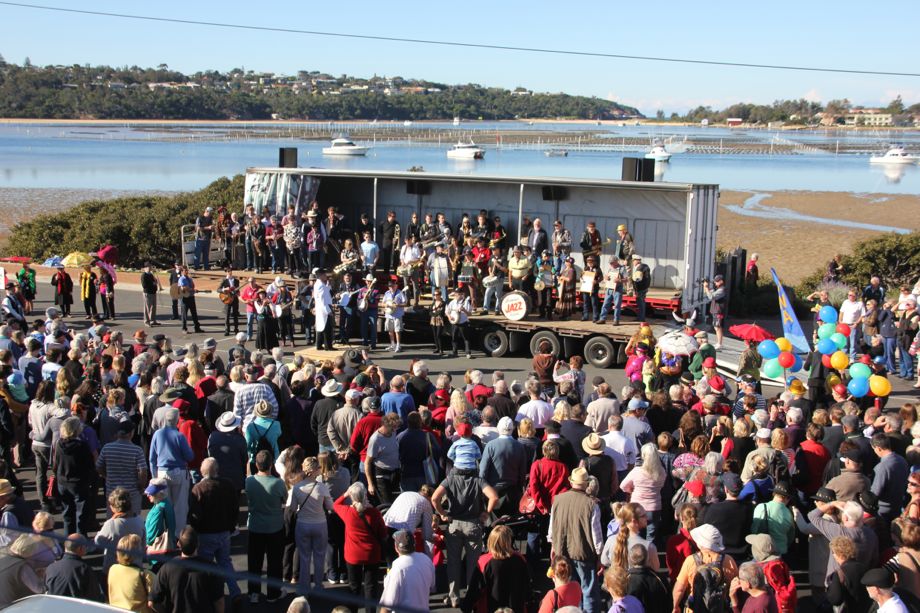 For one of Australia’s largest and oldest jazz gatherings the annual Merimbula Jazz Festival is surprisingly little known outside performing circles. There’s not too much buzz about it outside of the musicians who attend. I hope, after this year’s festival, this is about to change. Set in the stunning seaside town of Merimbula on the Sapphire Coast the festival boasts a thirty five year history, headline acts including the Army Big Band (Sydney) and Angela Lount & the Fedora’s, an energetic street parade, and a full four day programme covering eight distinct venues.

This year’s festival drew several thousand people, including more than 450 musicians, to the normally sleepy town. They would not have left disappointed. There was a little of something for every taste on offer, from hard funk to big band, trad to Dixie, and blues to bop. Bands made the journey from Melbourne, Sydney, and Canberra to attend and, for the most part it seemed, brought a large chunk of their audience with them.

The weekend was marked by a string of excellent shows, starting with a first-time collaboration between nationally renowned composer, pianist, and bandleader Sally Greenaway and internally acclaimed classical soprano Louise Page. Greenaway’s luxurious and sophisticated arrangements of jazz classics were perfectly complimented by Page’s superb voice. It is no wonder it was standing-room only at this fantastic gig.

Next on the roster of must-see events was the Australian Army Big Band (Sydney). This professional outfit is always a crowd pleaser, and with a tight set fronted by the remarkable Angie Carrington on vocals this appearance was no exception. The only issue was the venue. The Club Sapphire Auditorium is a truly dreadful space for big bands. It muffles and muddies the sound coming out to the audience, and the stage setup raises a number of serious OH&S issue. However, the Army Band still managed to pack the house!

The Army Band Sextet played directly afterward, a few streets away at the Lakeview Hotel. This is a phenomenal group – each member is talented and engaging, and they fit together perfectly. Mal Fawcett’s understated yet sophisticated drumming combined with the captivating voice of Ms Carrington kept the audience entranced, and the melodic solo work by Jonathan Apps on trumpet and Mansell Laidler on bass left us shouting for more.

Mark VI, a Canberra-based sextet put together by Royal Military College Band trumpet player Mark du Rieu, were an excellent opening to Sunday’s events. The group played arrangements by their multi-talented saxophonist Rouslan Babajanov. Rouslan cut up a storm in his solos, as did Barnaby Briggs on bass. Also out of Canberra, Reservoir Cats are a young hard-funk group. Their set at the Lakeview was raw, energetic, and thoroughly entertaining. Hopefully they will be back in future years with the same energy, further original charts, and a little more professional polish.

Sunday evening wound up with a bang, as vocalist Rachel Thorne’s group In 2 Dee wooed the crowds with shimmering renditions of some sultry standards. Earlier in the festival Rachel had stepped in to cover for an absent singer with the Connexion Big Band and there too she left the audience spell-bound.

An honourable mention must go to the Swing Katz Dance Company. They were everywhere during the festival, from the street march to big and small band gigs, in so many venues. Their seemingly endless energy lifted many performances to new heights and provided stunning theatre.

It was sad to find a few bands missing from the line-up, particularly Moochers Inc. whose performance last year was too much fun, and the Dan McLean Big Band who had impressed in previous years with their polished sound. However, the festival was a succession of thoroughly enjoyable gigs. If you can make it to Merimbula in 2016, make sure you do. Just book early!