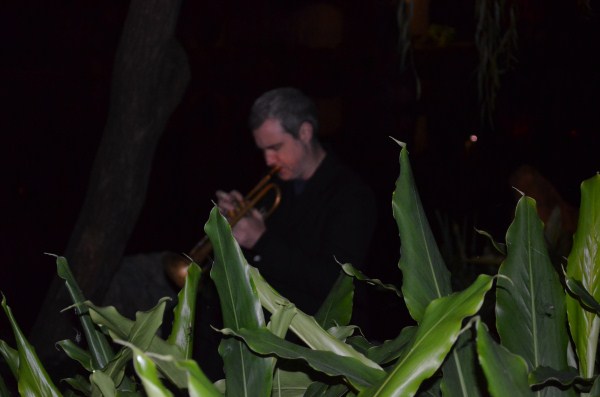 An interview with Phil Slater for Jazz Australia.

JA: The trumpet is often regarded as one of the most difficult instruments to play. How did it first capture your imagination?
PS: The choice of instrument for me was incredibly random – I never actually wanted to play the trumpet.  I tried to join my school band to be with my friends, however, there were no instruments left.  For some strange reason, I kept going to the band practices – even though I didn’t actually have an instrument.  I sat on the side and watched and listened.  After a few weeks of this, one of the students came to band practice saying her parents didn’t want her to play the trumpet any more.  The instrument became available for me to play.  That was how it began . . . I had no desire to the play the trumpet at all . . . very random.

JA: What was the learning process like?
PS: I don’t think I was particularly musical, but I loved practicing and especially loved the physicality of the instrument.  I think it’s the sort of instrument where the breathing element becomes meditative – and i think this makes it appealing to some players.  I probably had some obsessive tendencies, and I had a fantastic instrumental teacher in the Illawarra named Ron Muir who was a great player – hugely influential to my music – and obsessional about the technical aspects of playing.  As a result, I received an extremely disciplined approach to the technical elements of the instrument – which is still the core of my instrumental and creative practice.  And, he introduced me to some of the music that really changed my life and became central to my life.  I was lucky to become involved at a young age with the University of Wollongong School of Creative Arts – both playing in its ensembles and attending concerts.  I heard some amazing music over my high school years – and sat in on composer workshops and lectures.

I think more than anything, I really loved music, and was constantly moved by music I heard on the radio or TV or in concerts . . . wherever.

JA: How did you first start playing professionally and what were some of your early groups?
PS: In 1990 I started a music degree at University of Sydney as a composition major, and had more or less stopped playing the trumpet.  I studied composition with Eric Gross and Peter Sculthorpe.  I had an interest in jazz, however, I was equally interested in composition – and thought that this would be the direction I was going to take.  Some of my friends at University of Sydney (including Matt McMahon – who was a year ahead of me) were going to jazz gigs in the Sydney.  I went along to a concert at the Harbourside Brasserie to hear Dale Barlow perform – one of the first concerts he gave upon returning from his stint in the U.S. with the Jazz Messengers.  It had a huge impact upon me, and actually radically changed my thoughts about music making.  I transferred from University of Sydney to Wollongong University and began practicing the trumpet and focussing upon being a jazz practitioner.  By about 1993 I had started performing in Sydney with Andrew Robertson’s band called Sixth House (named after Andrew Dickeson’s house in Annandale – which was a focal point for jams and rehearsals in the 1990s).  I began studying and sitting in with Dale, Bobby Gebert and Bernie McGann and in about 1993 was asked to join Mike Nock’s band with Jason Cooney, Simon Barker, and Cameron Undy.  From about 1993 on I was performing with Mike very regularly, with Sean Wayland’s various projects, Steve Hunter, Carl Orr, Cathy Harley, Gai Bryant, Sandy Evans, and many others.  From about 1995 I started playing a lot with Rick Robertson in DIG and Baecastuff – Rick has been an incredibly special person to me.

JA: When did you first become interested in composing and how has this eventuated over the years?
PS: I try not to separate the ways I make music: improvisation, composition, performance.  It’s all the same creative process for me . . . so I guess this is what I refer to as my ‘practice.’  My primary interest is in sound, creativity and ideas . . . and I use whatever tools I have at my disposal.  I work within the ‘jazz’ methodology – which values collectivity and shared ideas and the performative and spontaneous creative process and adaptation.  I don’t think of ‘jazz’ as a style or genre, but as a way of thinking about and creating music.

JA: You have performed and recorded with a diverse range of Australian musicians.  Can you list some of your favourites?
PS: From early on in my professional career I’ve taken care to choose the projects I invest my time and energy into . . . because of this, I’ve really loved all of the projects I have been involved with.  The projects like Band of Five Names, Daorum, Baecastuff, Path’s and Streams.

JA: You have worked in the academic field as well, for a number of years. Where has your focus been there?
PS: I have been Lecturer in Music at the Sydney Conservatorium of Music for about 10 years.  I teach within the Jazz Unit, and my interests are in the ontology and epistemology of Australian music making, trumpet pedagogy and practice-based research methodology.

JA: What project or projects are you currently working on?
PS: I’m currently undertaking PhD research into representations and responses to place and landscape in Australian contemporary jazz.

JA: What can the audience expect from your quintet concert?
PS: This quintet features tenor saxophonist Matt Keegan along with pianist Matt McMahon, bassist Brett Hirst and drummer Simon Barker.  The concert will present original new works composed and developed by this group.  I think this music has a deeply lyrical quality to it . . . I’m interested in the conceptual and physical effects of distance and locality . . . like the distance and locality of music in dreams.  That thoughts and feelings, time and memory have this mysterious and illusive proximity or presence.  I think that the way we work is that we’re trying to create some kind of distant dream-like musical state.  A drift of sound that is both clearly focussed, but also diffuse and mist-like.  The focus of the listening experience changes moment to moment.  We’re trying to create an immersive sound world.