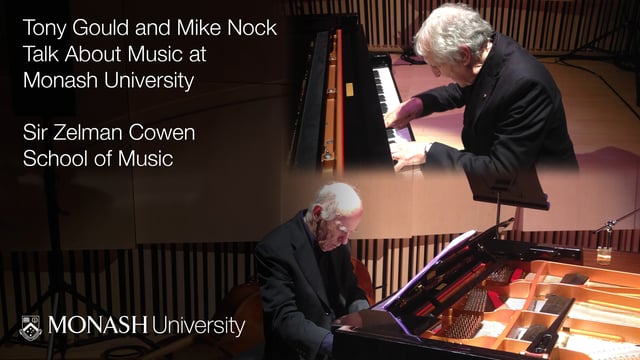 The Monash Sessions by Tony Gould and Mike Nock, review by John McBeath

This album showcases two Australian jazz giants of piano, both solo and together, plus their appearances with three different groups of talented young musicians from the Sir Zelman Cowen School of Music.

Both of the solo pieces – Tony Gould’s Reflections and Mike Nock’s Embracing You – are introspective originals, and the twin performance, Duality also floats serenely with an inner-directed harmonic approach where the twin pianos work comprehensively together.

Transitions, the only track not at a slower tempo, has Nock fronting a quintet of students with Monash staffer Rob Burke on tenor sax providing a robust solo ahead of Nock’s explorative investigation of the changes via running treble and stabbing chords ahead of a thoughtful bass passage from Angus Radley.

Melanie Taylor sings a nostalgic introduction to Somewhere Called Home featuring Gould and an instrumental quartet, in a poignant ballad in three-four time with sensitive trombone and tenor sax pairings from Eleanor Lamb and Aidan Hodge.

Lamp is Low, based on Ravel’s Pavanne, has a melodic intro from Burke’s tenor with Niran Dasika’s trumpet, adding Gould’s motile piano underscoring and a fine guitar sequence from Dan Mamrot as the piece traverses a very listenable arrangement of this vaguely familiar theme.

It’s a varied collection of high quality playing of arrangements from two well-established pianists as well as younger groups of artists, in solo, duo and ensemble modes.