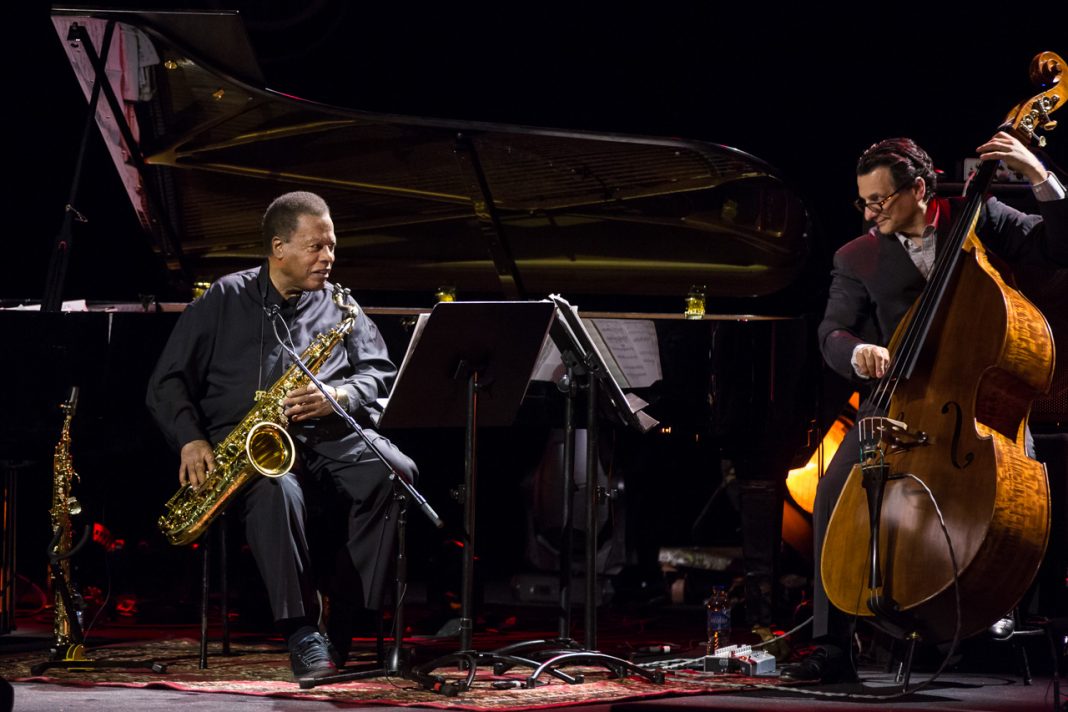 The last time I heard Wayne Shorter – long after Miles, Weather Report etcetera  – his performance was so full of stops and starts- lifting the tenor saxophone, pondering, lowering it, lifting, playing a three or four note phrase, lowering the instrument, pondering some more – that I found the piano bass and drums more satisfying than the leader, though a profoundly suggestive and yet mysterious saxophone phrase would sometimes linger in the air. The problem seemed to be that they sustained their lines a lot longer than he did his tiny interjections.

As I recall – for this recent experience was such a long one, the trio of pianist Daniilo Perez, piano, bassist Patitucci, bass and drummer Brian Blade opened the recent  concert with a superbly poised, melodic, harmonically and rhythmically subtle interaction while 82 years old Shorter sat listening, and from this distance looking as young as his companions. All were in dark suits immaculate as their music. They reminded me of the Modern Jazz Quartet, whom I am old enough to have heard and seen Shorter, before he had even moved, hypnotised his audience with his presence, posture and alertness. Admittedly I was, as mentioned, a long way back. This might have come out as a complaint regarding my ticket, but the sound was most excellent. The two sound engineers were one seat away from me, so they made sure they heard it well.

The fact that Shorter was sitting in silence was far better than his standing out front and playing in fragments. The fact that the compositions were written and beautifully integrated helped. Shorter’s tenor saxophone (he would later also deploy the soprano horn) was lifted so stealthily that it was only when his tone, sustained huskily at whisper level) entered the ensemble organically that you noticed the instrument at all. I would not have minded if it had stayed at that level throughout, and for a while that seemed to be the prospect. To stay with this opening for a moment: this was one of those interludes when music seemed to be moving and not. Moving yet still, like a cloud on a day of slow spare wind. I wondered if the sound was as good throughout the sonically cantankerous concert hall. The eruption of applause at each ending seemed to answer that. Something was really happening!

Along the way the tenor , still held near the horizontal with the bell turned down toward the microphone produced without apparent effort from Shorter a series of sonorous and grave tones of booming darkness, grandeur, elegance and even nobility.

It should be mentioned that most of the time the central pulse was right down at the level of an athlete’s resting heart rate. Within that – within and across it, the  trio danced and chattered in a swift complex play of textures, sometimes moving independently but coherently at different speeds. At whiles Patitucci switched from pizzicato to arcetto (bowed) bass, with singing phrases and tone -briefly assuming Shorter’s  role. Blade is a remarkable drummer, who impressed me with his debut many years ago, after which I gradually forgot him. Sometimes the ensemble burst into a fusillade that shocked and excited. The drums indeed cracked like gun shots and in today’s climate I for once jumped and then subsided in relief as we dropped back into the sweet underlying drift of the music. I can’t pretend these outbursts were not exciting.

While the colours of Sydney’s Vivid festival scintillated outside we watched and listened to four men in dark elegant suits. Walking outside at the end the contrast was a magical one for me. At home a cup of coffee and a couple tracks from  Filles de Kilimanjaro with Miles, Wayne, Herbie Hancock and the other wonderful players.