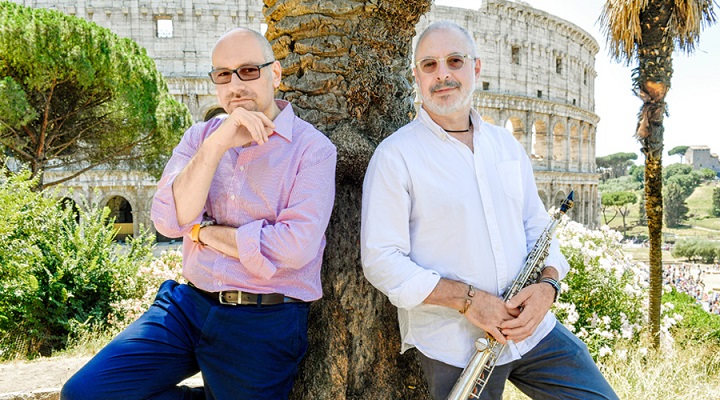 The Whole and the Sum of its Parts

An interview with Mark Ginsburg for Jazz Australia.

Released in September this year on German label Ozella Music, the album has received strong reviews from critics and audiences alike. We chatted to Mark Ginsburg about his latest project.

Your new album presents as a suite of music mixing both classical and jazz. Can you explain the concept?

I think it is getting more difficult to define music by genre these days.  I am interested in music that moves me, no matter its origin or genre. Our goal with this project was to draw on our individual life experiences and inspirations which make up our musical DNA.  Other than the need to leave room for “musical conversation” or “improvisation”, we did not place many limits on the possibilities.

How did you association with Vittorio Mezza begin?

Vittorio and I met at Penn Station whilst we were waiting for a bus to Stroudsberg, Pennsylvania where we were both attending a Dave Liebman masterclass in chromatic harmony concepts.  Vittorio was aware that a few of us were on our way there, saw me carrying a saxophone and decided to make introductions. We connected immediately, had a great discussion on the bus and worked together at the masterclass… that was the start of it all.

Tell us a little about Vittorio’s musical background.

Vittorio grew up in a small town, Telese, about an hour inland from Naples.  From an early age, his parents encouraged and supported his musical interests which were classical piano to begin with.  As a teenager he became interested in improvisation and expanded his interests, embracing jazz as a key area of development.  He won a number of competitions and along with his tertiary studies, became active on the European jazz scene, performing at Montreax Jazz Festival as well as leading bands that played openers for Wayne Shorter, Jeff Beck and a number of other big names.  He has also held the chair of jazz piano at the main Italian conservatories and continues to perform (solo and ensemble), record and teach. Vittorio has published a number of jazz educational books.

How did the composing process work in collaboration with Vittorio and what was the inspiration behind the music?

Firstly we got to listen to and play each other’s music from afar.  I incorporated one of Vittorio’s compositions into my quartet repertoire quite early on and arranged one of his tunes with choral accompaniment (by Bel a cappella) for my Masters recital at the Conservatorium of Music in Sydney.  A few years later I had been invited to tour Europe with Bel a cappella, and contacted Vittorio with the idea that we do some performances when together in Rome. About 8 months before the tour was to begin, we came to the decision that we should record an album whilst I was in Italy.

That started a more earnest review of repertoire.  Our “steel rod” for the project was that we both wanted to record original compositions that reflected our diverse musical experiences and influences.  Over a period of months, we selected repertoire for recording and then revisited the specific treatment when I arrived in Rome. I was really encouraged by his openness to explore all sorts of sound palettes, ranging from acoustic to electronic and from duo to full ensemble.  We both love playing each other’s music, so that is good!

We are not driven by genre.  Come to think of it, I like lots of music.  Only rule is that it has to move me in some way.  And my listening regime is not necessarily the same as my playing regime.  I love to watch tennis but I don’t play tennis.

More recently, we have been working on some compositions together – for example Vittorio might come up with a harmonic structure on top of which I then develop a melodic theme, or vice versa.  It’s still early days as we have only gotten to play some of these on our recent tour. As with everything, it’s a process.

Tell us a little about the actual recording and the other musicians involved.

We recorded Convergence at Tube Studio about an hour north-east of Rome.  The studio incorporates a live-in apartment and is nestled in an olive grove.  What an amazing place and perfect environment for recording. We spent the first afternoon setting up and then recorded 12 tracks over the next two days.  Most were first or second takes which was refreshing. Somehow everything just worked really well. Up until a few days before the recording, my wife Judy and I were on a 19 day walk in Spain.  It was physically taxing but it cleared my mind. I had my soprano sax in a PVC tube in my backpack and so had the opportunity to get a few practice sessions in whilst on the walk. (Hopefully a novelty for those passing by.)  Luca Bulgarelli on bass and Marcello di Leonardo on drums were so good to work with. We had fun and we played good music.

When we returned to Australia, we added voices and percussion.

I was really pleased that we could work with Phil Punch on the mix.  He understands the music and really sculpts the soundscape.

You recently toured your native South Africa promoting the Convergence album. How was that experience?

We played five public concerts and one private one in South Africa, performing in Cape Town, Stellenbosch and Johannesburg.  Most gigs were well attended except for a few where I am not sure we had the best promotion strategy in place. It takes a lot of effort these days to get that interlock between presenter and performer, especially when on different continents.  But we did have good radio coverage, sold a fair number of CDs and were invited to return in the future.

The most exciting thing for us was that people loved what we were doing.  At one of the venues in Cape Town, I had one of my highest musical experiences ever.  Everything just clicked….

You have an Australian tour scheduled for next year with Vittorio. Can you give us some advance details?

We are still in the planning stages for our tour in late May / early June but things are shaping up nicely with a few festival opportunities as well as gigs up and down the east coast in the wings.