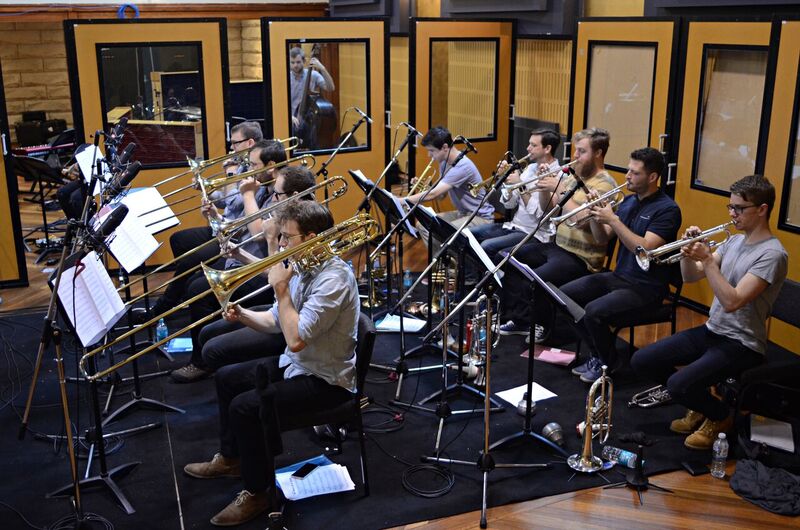 “As a composer I find that when writing for jazz orchestra there are just so many sounds you can get, it’s like a journey of discovery writing for them with so many colours to play with and endless combinations and possibilities.”

An interview with Jenna Cave and Jazz Australia

Talking about the Divergence Jazz Orchestra, composition and inspiration

JK: When and how did the Divergence Jazz Orchestra come about and how difficult was it to assemble the musicians that you have?
JC: For as long as I’ve been composing large ensemble jazz (I started in 2004) I had dreamt about having my own jazz orchestra one day to write for and conduct. The idea for Divergence specifically first came about when I was studying my Masters in composition with Bill Motzing at the Sydney Con (2008-2010). I would bring my pieces into the con big band to workshop and develop them, and that’s where I met Paul Weber and a bunch of other musicians who where then in the jazz course. Paul and I discovered that we both had aspirations to form a big band one day, and decided it made sense to team up and do it together- especially as our skills and areas of expertise seemed to compliment each other nicely. We started the band in 2012, initially as a rehearsal band, and then put on our first gig a few months later. It wasn’t too hard to assemble the musicians, obviously there was a lot of calling around and trail and error to get the right mix of people, many have come and gone. We now have a really solid group of mmusicians who work well together and get along.

JK: What have been your major musical influences and how have they materialised in the big band format?
JC: I spent my earlier years as a teenager listening to a lot of classic small group jazz from the 1940s onwards – a lot of Miles, Coltrane, Cannonball Adderley. As a teenager I also loved listening to 60s soul like Aretha Franklin and Al Green and funk. When I started becoming interested in composing and arranging this opened up what I listened to and how I listened to it. I started checking out a bunch of classical composers and naturally gravitated towards late 19th and early 20th century orchestral composers like Ravel, Stranvinsky and Bartok. Listening to this stuff intensely is really gave me an education in composition, in how to structure and develop a piece of music. Around this time I also listened a lot to Wayne Shorter and Maria Schneider, with an interest in Wayne’s harmonies, Maria Schneider’s orchestrations, and how both of them shaped a composition in the jazz context, incorporating improvised solos as part of a larger compositional form. After that I went through my west African music and Steve Reich stages as I was enthralled by grooves and polyrhythms.

I think all of these influences have come together in my composing for big band and how I think about music. Rhythm and groove plays a huge role in my music and all the music divergence plays. I think it’s easy to get too cerebral about composing and forget what the heart of jazz is: rhythm and feel. For me, it needs that aspect. Additionally, I love beautiful melodies, harmonies and orchestrations and I’m always trying to find new ways to develop my compositional forms.

JK:You have many excellent musicians in the Orchestra – without naming favourites can you mention a few?
JC: I love them all! I think we’ve got a great bunch of musicians who are all really sensitive and tasteful in their playing with a variety of musical backgrounds. I love what everyone brings to the table. We have some fantastic section players who really know how to blend and support each other, and others who stand out as soloists. I’ve always enjoyed Will Gilbert’s trumpet and flugelhorn solos which are very expressive, and Paul Murchison and Rob Campbell do a great job of sharing the role of lead trumpet.

We’ve also been really lucky with our rhythm section who has remained the same since pretty much the start – they are really solid and have great energy; Andrew Scott – piano, David Groves – bass, Luke Liang – guitar and James McCaffrey – drums.

JK: What inspires you about the sound of such a large ensemble?
JC: There is just so much great musical energy there with 18 instrumentalists and a conductor coming together to create something as one, it can be a breathtaking and humbling experience standing in front of Divergence as they play. As a composer I find that when writing for jazz orchestra there are just so many sounds you can get, it’s like a journey of discovery writing for them with so many colours to play with and endless combinations and possibilities.

JK: You’ve described the big band as a kind of “community” – can you elaborate?
JC: When Paul and I established the band we wanted it to be a place where we could play music  written by myself and other members of the band, as well as from other composers in our networks;  in doing so strengthening a sense of community and collaboration for composers as well as all the performers getting together. While we work hard at rehearsals and gigs, we all make sure we are having a good time, and strive to create a supportive environment where creative ideas can be shared. We have 19 people performing in the group at any one time; but it really extends way beyond this. We usually have a few deps on the books who will join us for rehearsals or gigs when someone can’t make it, and then there are all the past members too who are off doing new and exciting things now. So the broader Divergence community would incorporate at least 40 musicians and composers by now.

JK: What have been some of the more memorable concerts you and the group have played in recent years?
JC: We played at the 2015 Capital Jazz Project in Canberra in June last year. That was a fantastic gig. We played two sets of music, mostly written by myself, which we knew really well. Miroslav Bukovsky joined us as a guest soloist. It was the first (an only) time we’ve played in a theatre, the sound was great on stage, and all the elements were just right for great music making.

JK: You have just released your second album. Tell us a little about both the composing and recording process.
JC: The 11 pieces on the new album are a collection of pieces written over a long period of time which were chosen to record. With my compositions I like to take a bit of time with them, some of the pieces on the album, such as “Now, My Sun Can Shine Again” I worked on over a period of 6-months, giving the music time to breathe and give myself perspective and space as part of the creative process. I also find the more serious pieces take me longer to write as I really want to take the listener through a journey, which ends at a very different place to where it starts.

Recording the album was really fun this time around, it’s our second album as a group and experience really does help make things go smoother! We went into the studio well rehearsed and recorded 11 pieces over of two days, which was a pretty mammoth effort. We actually only planned to record 9, but had to spares in case we could fit them in. We were really lucky to have Jessica Wells producing the recording sessions. Jess is a composer and orchestrator and really experienced at producing recordings, with lots of practice doing it for film scores. Jess and our engineer Christo were listening intently in the control room while the band was all in the studio, in one room. Jess had copies of the scores and lent us her ears by telling us what sections of a piece we got down, what we needed to get another take of. Jess also gave us some great advice which we took by scheduling the two days quite tightly, with a timeline of what pieces we were going to record when, and lots of breaks planned. It just made the whole thing a lot easier on the day.

JK: What can people expect at your CD launch?
JC: We’re mostly going to feature music from the new album; composed by myself, Brendan Champion, Luke Davis, Paul Murchison and Miroslav Bukovsky.  Stylistically there is a great range of music on offer; from gospel ballads, New Orleans second line, modern jazz to pop-infused grooves. All of our repertoire has an emphasis on groove and feel, memorable melodies, expressive orchestrations and captivating compositional forms.

We are also going to be premiering two brand new pieces at the launch from two fantastic Sydney composers in our extended community: Jessica Wells and Paul Cutlan. It’s going to be a really fun night.

The Divergence Orchestra perform at Foundry 616 on Friday 14th October