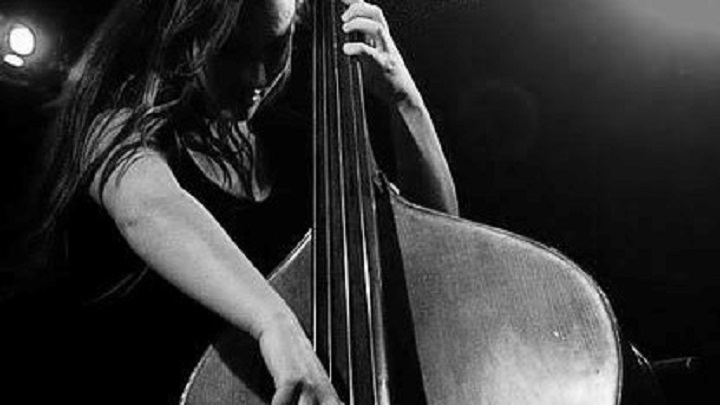 Some wonderful music continues to come out of Western Australia. There is definitely something in the water over there.

The latest in a long line of exciting releases is Kohesia, the debut album of bassist/composer Kate Pass‘s Kohesia Ensemble. The Ensemble’s sound and Pass’s compositions mix jazz timbres with Persian (Iranian) sounds and melodic concepts (I choose to think of it as Persian rather than the more modern Iranian because this music seems to speak with a voice that summons timeless and multi-hued, multi-patterned visions).

However, Pass’s compositions and musical palette are far from mere exotica – in fact, the conversational mix of Western and Middle-Eastern musics could not be more timely, with the current world schisms and tensions between the two cultures. To hear these voices side-by-side, talking and twining together is an almost political call for hope – one where neither side sees the other as the “other”.

And that is the gift of Pass’s writing – the range of ways she mixes the two disparate and quite unique timbres together: on ‘Journey to A Faraway Place’ she fuses Ricki Malet‘s trumpet and the ney (wooden flute) of Esfandiar Shahmir into an intriguing hybrid voice over arco bass; on the 5/8 groove ‘Point of Departure’ the same two instruments answer each other, as if in a conversation that spans the centuries across a barline; on opener ‘Nahafsi’ the tenor sax of Marc Osbourne is answered by Mike Zolker‘s nasal yet sinuous oud.

The writing fits the phrasing and execution to the mood: ‘Nahafsi’s microtonal grace notes pull against the hem of the melody; the changes of ‘Origins’ are either folk changes if played by the ney, or jazz changes when the tenor takes over.

‘Schplur’ reminds one of a Horace Silver hard bop groove – a groove which holds up just fine under the oud solo. Pass’s intelligent and soulful bass improvisation here is informed by her compositional skills in its shape and momentum. Drummer Daniel Susnjar pins the whole performance down with customary taste and fire. Susnjar also produced Kohesia, as well as enlivening the album with his superlative playing. His solo over ‘Schplur’s faux-montuno and his jabbing and jibing comp under Chris Foster‘s sparkling piano solo on ‘Origins’ are high points.

Kohesia has been nominated for a slew of awards and The Ensemble have been invited to play major national festivals. It is no surprise: from Elle Deslandes‘ and Reza Mirzaei‘s beautiful and apt package design down through the album’s production, mixing and mastering, Kohesia is excellence, pure and simple.

The poem inscribed on the inner sleeve is by 14th century Persian poet Hafiz. It reads: “We’ll crack the Heavens’ vault in half and hew a wholly new design”. With Kohesia Kate Pass has created a fascinating new voice by less violent, but just as powerful, means: this music comes from a heart that seeks beauty and a heart that seeks peace.