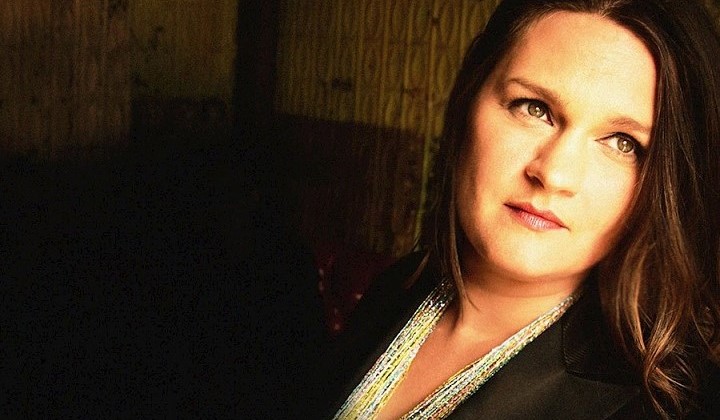 Secular Hymns comes twenty years after Madeleine Peyroux’s debut release, Dreamland, the album which catapulted her into the public eye. Her voice has often been compared to a mid-career Billie Holiday and that comparison remains valid on Secular Hymns.

This is her seventh solo album release since the debut release, coming on the heels of the Ray Charles inspired The Blue Room (2013). Recorded at the Parish Church of Saint Mary the Virgin in Great Milton, Oxfordshire, England, this recording finds the vocalist /guitarist delivering a stripped down, largely acoustic set of warm, eclectic cover tunes. Backing Peyroux this time out are guitarist/vocalist Jon Herington and bassist/vocalist, Barak Mori, both highly sought-after New York-based musicians with deep jazz, blues, and rock credits.

Secular Hymns has the feeling of an intimate Peyroux concert from which its roots are derived.The music is ‘summery’ and laid-back with the tunes of Tom Waits,Lennon/McCartney, Allen Toussaint, Howard Biggs and Joe Thomas being the standouts.

The album makes fine use of Peyroux’s jazz chops throughout although Secular Hymns is really not a jazz album as such. Peyroux’s voice perfectly conveys every song’s emotion, no matter how deeply touching the subject matter is and the album will please her many fans no matter how ‘rootsy’ and mellow she may go on this outing.The recording continues her musical journey of exploring beyond the ordinary with a deeply spirited and soulful masterwork.