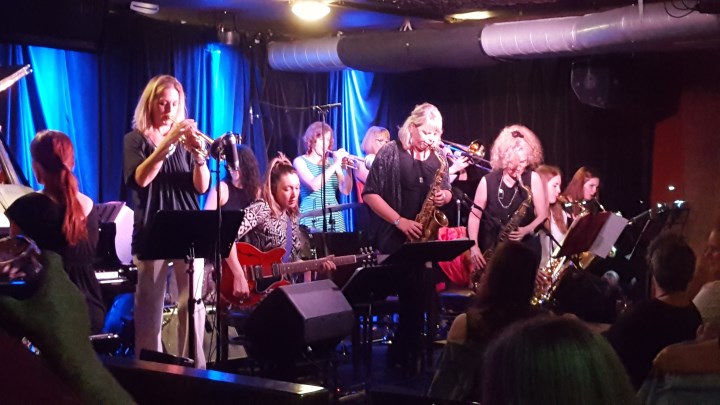 Having just returned from the challenges of The Wangaratta Festival of Jazz, the critic is faced with further challenges to his fading conceptual and descriptive abilities by this remarkably high level of playing and composing. This was the first event I heard, and a large Paul Grabowsky ensemble (with two Aboriginal performers) was the first I heard at Wangaratta. I am a big band enthusiast from Basie and Goodman through Ellington, Kenton, Herman, Shorty Rogers etc to the large settings written by Gil Evans for Miles Davis.

There were elements here that echoed some of the above in some way, and further features that affected the work of the Collective’s composers – Glenn Doig, Jenna Cave, Andrea Keller, Ellen Kirkwood  et al – in related but distinctive ways. Related to each other that is. It all amounts to a little known but definite movement in this area.

So let us talk in general terms. There are quite long passages beginning within a moderate dynamic range, in which the band sounds like a body of flat clean clear water smoothly sliding through a narrow passage invisibly inscribed through the air. Bright and clean-edged, the sound shone and accrued a surprising intensity. At times it was the whole band harmonised and broadening in scope. Modulations were so subtle that they sounded like shadows through which the waters passed rather than a change of harmony.

This listener was almost burned by the rising intensity in places (despite the cool character of  the sound).

Suddenly the two trumpets of  Ellen Kirkwod and Louise Horwood – discretely enlarged by other instruments – were brilliantly blasting through yet above the ensemble, almost achieving the effect of Stan Kenton’s five or six trumpets.

This hit the mixed (boys and girls) crowd to the point of loud shouting. Each composer had sections which departed from the general underlying glide through space. Contrapuntal activity entered the scene, sometimes busily, sometimes gently tumbling, and sometimes this gave way to repetitions of the one insistent note, until the different band sections began to tumble independently, then in direct opposition, and the repetitions were absorbed, then rose again in the background and with all this activity the enamelled or glassy surface became soft and pliable.

Languid and more often quite fierce and ascerbic solos  wove and sliced through the organized ensembles. Sandy Evans and Melissa Mony. were often heard on saxophones, also Alex Silver, trombone. Soloing and immaculately lifting the ensemble into subtle buoyancy were bassist Hannah James  with her limber sound, drummer Ali Foster and pianist Emma Stephenson (this year’s Jan Rutherford Prize  winner), who produced a series of brilliant cascades, which also fed ideas to all around  her.

As I left for prescribed bed, prominent listener David Sanpson asked, “Was that beautiful?” He had no need to ask the familar. “Or what?”

Incidentally, when I arrived I made a terrible joke; “How come his band is full of (ah um, I’m just trying to stay in WW2 period) dames?. Have all the men gone to war?” This was actually the   case often enough in my childhood. As it happens, unknown to me a film called The Girls In The Band had been shown during the festival, which demonstrated just how very very good some of those bands were. That was also a time when female conductors trod the outer footboard on the “toast rack” trams. And a time when I was fortunate enough to be cared for by my mother and her sister, who both surfed out the back with the lifesavers.

PS The Collective was also joined by internationals Ingrid and Christine Jensen on trumpet and alto saxophone. Due to have a scan of my – wait for it – testicle, for cancer (not cancerous fortunately) I was drifting off air by this time, but both demonstrated sure and sometimes quite original command and depolyment of the respective vocabularies. And of course technical command. I had hoped that somebody would be covering this and other events.