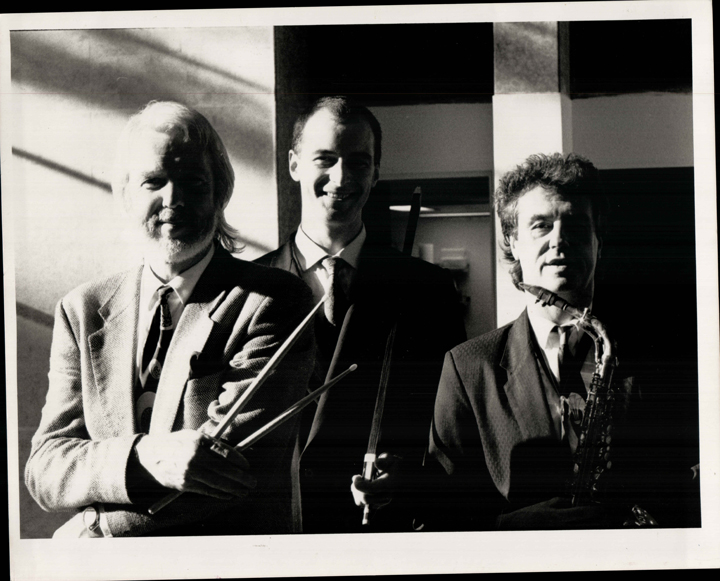 Eric Myers was National Jazz Co-ordinator, a position funded by the Australia Council and the NSW Government’s Ministry for the Arts, from 1983-2002. The following is a revised version of an article which first appeared in JazzChord magazine, May/Jun, 1996.

The first version of this article was prompted by the sudden death of Giorgi Bakhchiev in 1996, following a heart attack.

Giorgi, an official of what was then the Soviet Jazz Federation, turned up in my office in Sydney in 1988, accompanied by his Russian-speaking friend, the Tasmanian George Shenman. Giorgi had a number of Australian friends and, as a lifetime jazz enthusiast, had long dreamt of cultural exchange between Russian and Australian jazz musicians.

His visit led to the ground-breaking tour by The Engine Room in November, 1989.

Giorgi and I agreed that three Australian jazz musicians should go to Russia in 1989. As long as their return airfares and performance fees were covered from within Australia, Giorgi would guarantee a certain number of performances, and cover all costs within Russia, ie travel, accommodation and meal allowances.

The national committee, to which I was responsible, had a process in place whereby musicians from all states could be nominated by the state-based jazz co-ordination committees, and compete on a level playing field for such a tour.  The committee assessed all the applicants, and decided that the tour should be offered to three  Sydney musicians: (the late) Roger Frampton (piano, saxophones); Steve Elphick (bass); and John Pochée (drums) – in other words, the rhythm section of Ten Part Invention, known as The Engine Room.

Giorgi insisted that I should accompany the tour, so that he and other officials could speak to me in detail about a return visit by Russian musicians. The tour spanned November 12-December 5, 1989, a little over three weeks.

I could not have imagined, in advance of the tour, that it would be as successful as it turned out to be. In a written account, it’s difficult to represent the essence of the visit: the atmosphere of the concerts, the applause, the enthusiasm, the standing ovations, the interest in the musicians after the performances, the deep emotion just under the surface wherever we went, and the obvious special affection that the Russians we met had for Australians.

Roger Frampton was toasted as a marvellous, original jazz musician wherever the group performed in Russia. John Pochée was similarly regarded; he simply mesmerised the best drummers in the Soviet Union. Roger and John were, of course, institutions in Australian jazz. Steve Elphick, a younger musician, but still in the top handful of jazz bassists in Australia, was no less well regarded on the tour. He had great impact, particularly with the Russian bassists, some of whom asked for private lessons.

One of the trip’s early thrills for me was meeting one of the great piano virtuosos in the world , Leonid Chizhik. He lived in a plush apartment – by local standards – in the centre of Moscow, just around the corner from Red Square. We went there with Giorgi after the trio’s first concert, which took place on November 13 at the Central Palace of Culture of the All Union Blind Society.

Chizhik’s living room included a grand piano and a bank of keyboard synthesisers. He and Roger played together for about 45 minutes. Over many years, Chizhik had legitimised the performance of jazz in concert halls in the USSR, recorded for Melodiya, and performed regularly in the West. When we met him, he’d just returned from the US where he was on the international jury of a piano competition. Also, he ran the Jazz Center  in Moscow, an organisation which had 16 staff, a concert department, a recording studio, and performed various functions, including organising concerts for Chizhik.

While in Moscow we were filmed by Dr Nikita Bantsekin, for a one-hour television program on Australian culture, to be screened on Channel One on Soviet Television in January, 1990. In the interview, we were asked about the differences between Russian and Australian audiences; jazz education In Australia; the history of Australian jazz; the formation of The Engine Room; and so on.

After two days In Moscow, we went to Leningrad (now St Petersburg) on November 16, travelling overnight by train. There we stayed for nine days in a two-bedroom apartment, which belonged to the Leningrad Institute of Economy & Finance. During that period the Australians performed at a number of venues: the Dixie Jazz Swing Club (which was called, for short, the Jazz Centre); the Culture Palace of the Lensoviet, which held about 2,000 people (the main venue for the Leningrad International Jazz Festival); the Kvadrant jazz club; and East Vostok, a jazz club just around the corner from our apartment.

I’ll always remember The Engine Room’s first Leningrad concert, at the Jazz Center; it was a block-busting success. The Australians were top of the bill and went on just before midnight. About 100 people sat at nightclub-style tables downstairs in what was an old concert hall, and about 80 were upstairs. The audience reacted demonstratively throughout the one-hour performance – applauding, cheering and clapping along in response to a powerful and brilliant performance.

A short time after the performance ended, a jam session with several Russian musicians erupted, with Steve and John unable to leave the stage. Roger later joined them for a set of about an hour. It was heartwarming to see the Australians playing with the Russians. Musicians waited in a long line next to the stage for an opportunity to play. Giorgi Bakhchiev was absolutely ecstatic at this, and embraced me a number of times; jam sessions with Australian and Russian musicians had been his dream, and this was now a reality.