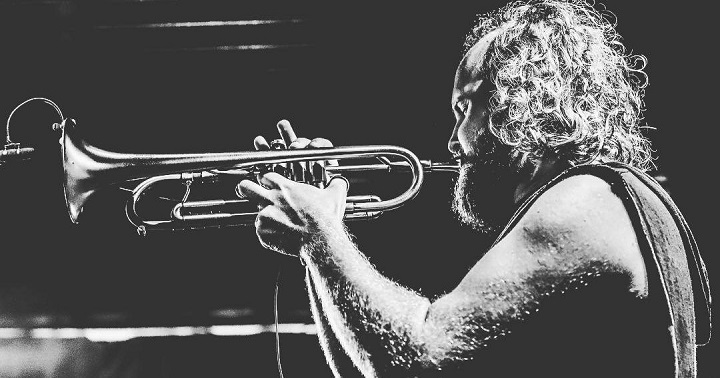 The improvising artist searching for his or her voice had led this listener down some intriguing paths.

Some are dead ends – the artist becoming so enraptured with the voice of their musical hero that they only imitate; brilliantly, yet still only imitation. Some are tangled thickets of intricately and beautifully carved and shaped vines – the trap of technique, all too common in jazz, a music that continues to mistake the meaning of virtuosity. Some paths fade out to weedy and stony ground, the path dissipated, all direction lost.

Sydney trumpeter Eamon Dilworth has always led this listener down a path that seems to become stronger and more defined with every release. His keen focus allows him to divert occassionally – as I write his most recent aside trip has been working with rockin’ Ed Kuepper in The Aints – yet, soon enough his sure foot is back on that good, sound path.

A recent trip to Romania has helped Dilworth shine a light on the road ahead – he says: “The trip opened me up to consider who I am, where I come from and how I deal with experiences and challenges. My musical output changed from this day to seek a deeper connection through my music and performance…”

The result is his exquisite new album Viata. The title is taken from the Romanian word for Life, but a much more existential and accepting definition of life – life as simply being.

This more passive and spiritual idea colours the album’s performances. Each of the nine pieces are more “settings” than compositions, or even improvisations – settings for Dilworth to express this idea of vista/life, and his reaction to it.

And the voice he speaks with is undoubtedly his own. The band of Alistair Spence on piano, Carl Morgan on guitar, bassist Jon Zwartz and long time Dilworth collaborator, drummer Paul Derricott, work impeccably creating these ‘settings’, lending them drama and a theatricality that makes each piece a small universe of its own.

‘A Love Affair’ is a duet between trumpet and piano, Dilworth staying with the mid to lower registers of his instrument, and creating some lovely burnished tones in his playing. The band joins in for ‘Discomfort’, Morgan’s high pearly notes adding an open-sky ceiling to the sound. The trumpet here has a deep anguish to it, reminiscent of Miles Davis‘ ‘weeping’ tone on ‘Solea’ From Sketches…

‘Eick’ has Dilworth declining long tones over a childrens’ song piano. Morgan here reminds of John Abercrombie in his anti-guitar playing. Many of the tunes on Viata have a European dissonance, a Bartokian slipping in and out of key and tone – not exactly dissonance, more the stretching of the envelope, a very human thing, tying it to the universality of the blues.

Dilworth’s use of long tones used here seem to come from the same place as Jon Hassell – a virtuosity of restraint and atmosphere. ‘Prelude Dreamtime’ is a floating world of dreamy, languid brass tones; the lady of ‘The Lady’ moves in and out of shadows indigo and blue-green.

Album closer ‘Toran’ exemplifies the European human-ness that is across Viata. The extended trumpet tones across a repeated minimal rhythm – occasionally interrupted by an angular rhythmic figure – have a strong folk feeling; and you realise that so much of Viata has a sense of folk form about it.

This folk favour is one element that is part of the depth of what Eamon Dilworth has done here – in reaching into himself and finding ways to express what he finds there in music, he has found a voice at once entirely individual and yet, universal. The path leads on…