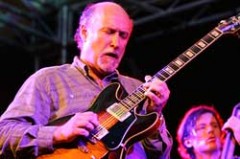 We are approaching the 20th anniversary of the Wangaratta Festival of Jazz & Blues. I have reviewed every year but one, writing at first for The Sydney Morning Herald and The Age, then in more recent times for the SIMA website. To mark this extraordinary anniversary, SIMA have assembled below all the Wangaratta reviews I have done for them. After the 20th Festival, that new review will be added.

I might mention that the Festival and the Victorian Tourist Bureau commissioned me to write a book (_Why Wangaratta?: Ten years of the Wangaratta Festival of Jazz and Blues_) for the 10th anniversary. This is usually on sale somewhere at the Festival.

Profit for me is very small. The plug is to let you know that the book has a condensed history of Wangaratta itself from before gold rush days, a much longer account of how this improbable event came together, and excerpts of reviews by myself and a number of others for each of those ten years. Now, here is the selling point: it also has an introduction by Jeff Kennett, who sadly was voted out of office the day before the book appeared!

Jeff’s introduction is brief and he begins by telling us he is not interested in jazz (Well, stap me! You could have knocked me down with a feather!) but has been impressed by the mounting attendances year by year and the money that has consequently circulated in the town.

Photo: John Scofield at the 2008 Wangaratta Festival of Jazz.